The British Library’s India Office Records acquired the papers of Charles Canning and his wife Charlotte in 2013. While most were in a fit state to be catalogued and made available to the public, five volumes of Charlotte Canning’s personal diaries had been badly damaged by fire and were too vulnerable to be handled without extensive conservation work (curator Lesley Shapland has provided a vivid account of the fire in Charlotte’s tent which damaged the diaries on the Untold Lives blog). 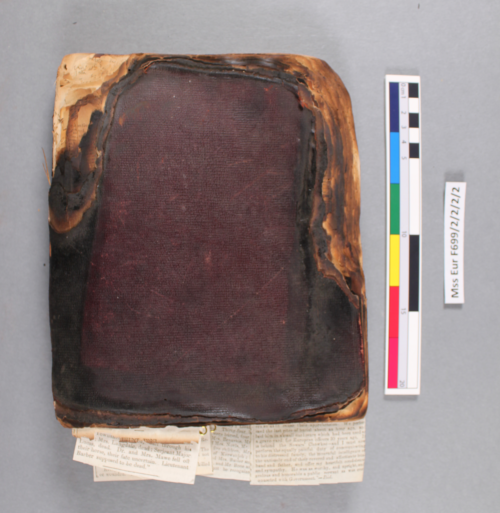 The primary aim of treatment was to make the diaries available for consultation by curators and researchers. But because the fire which caused the damage is an integral part of the diaries’ histories, and because it sheds light on the wider context of the Cannings’ lives in India, it was desirable that the evidence of the burn damage also be preserved. The conservation treatment therefore had to offset the risks posed by the burn damage while making sure the damage itself remained intact - an intriguing challenge!

The first stage of treatment was to consolidate the burnt edges of the diaries’ pages. This was done by applying a Japanese kozo paper weighing only 4gsm/m² on top of the badly burnt areas. As well as being very lightweight this paper has long fibres, and therefore provides strength and support to the brittle page while being almost transparent. 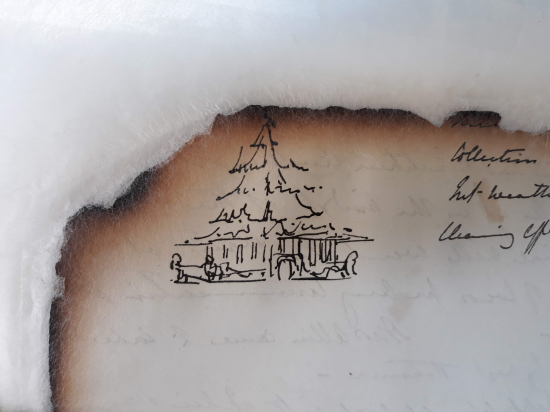 The kozo paper was attached to the pages with a gelatin adhesive. This was specifically chosen because it is compatible with the iron gall ink with which Charlotte Canning wrote the diaries.

Charlotte also used her diaries as scrapbooks and many oversized newspaper clippings had been burned in the areas where she had folded them to fit them into the diary. These were repaired with Japanese papers of various weights. 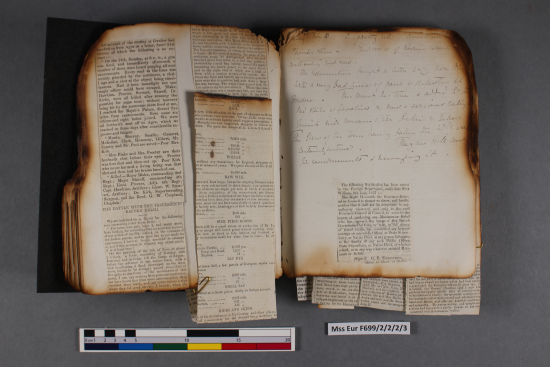 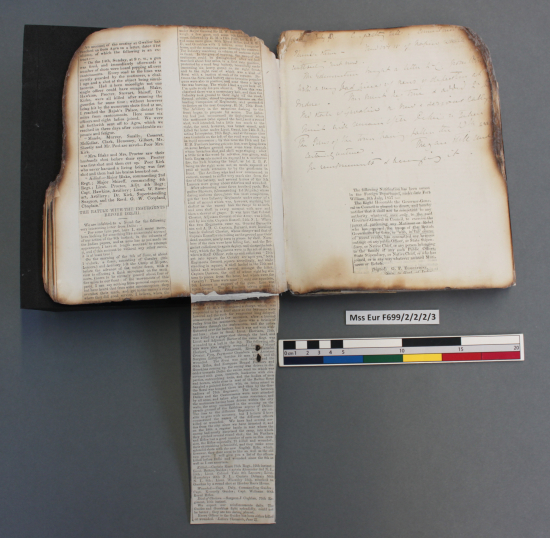 In some cases, where areas of the spine had been burned away, the paper folds of the diary were rebuilt using Japanese paper, so that it could be sewn back together and could continue to function as a volume. Care was taken to recreate the exact original sewing style, so that the diary would continue to open in the same way. This also helped to preserve the historical integrity of the item as a Victorian notebook. 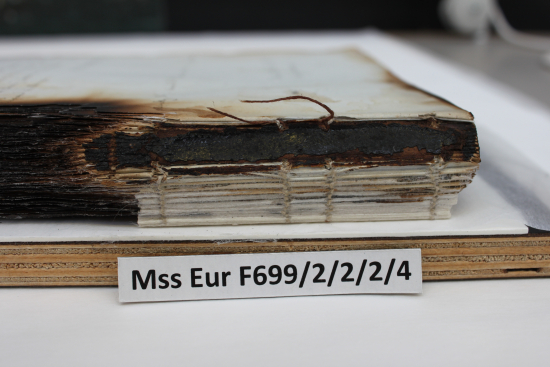 In the case of one diary, the burn damage was so extensive that the conservation work required to return the fragments of pages to the format of a book would have obscured much of the fire damage. It would also have posed a risk to the fragments, as they were so brittle that they could not flex without cracking, as they would need to in order to survive being turned as pages in a book.

The pages of this diary were therefore encapsulated between sheets of polyester surrounded by rigid frames made from acid-free mount board. This allows the text on both sides to be read without the vulnerable pages being flexed, or indeed handled directly at all. 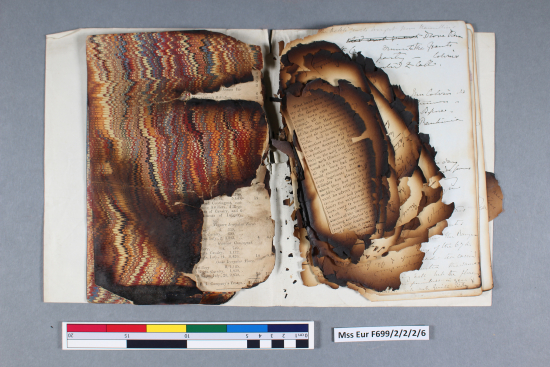 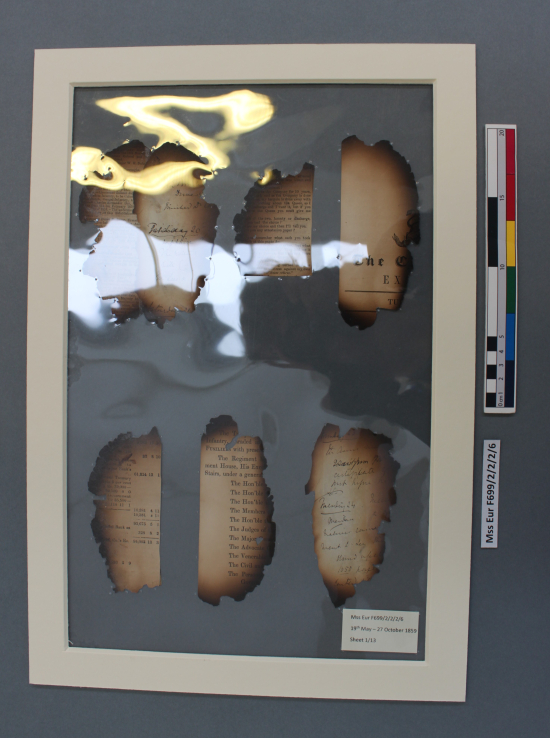 The diaries were stored in acid-free mount board wrappers to protect the page edges from being abraded. Each diary was then placed in a purpose-made box. The diaries still need to be handled with care, so the wrappers have been labeled with instructions for readers on how to use them safely. 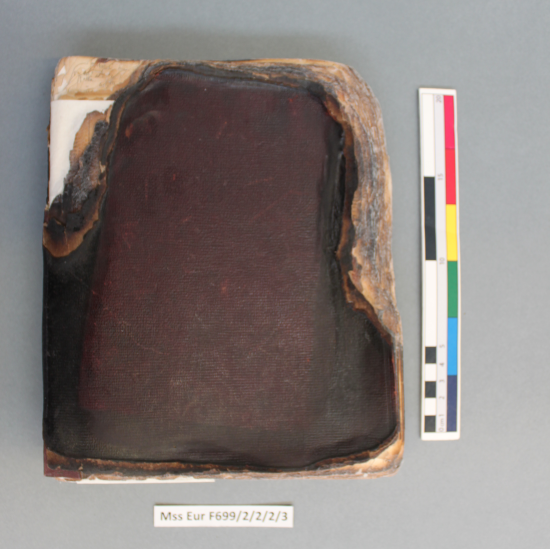 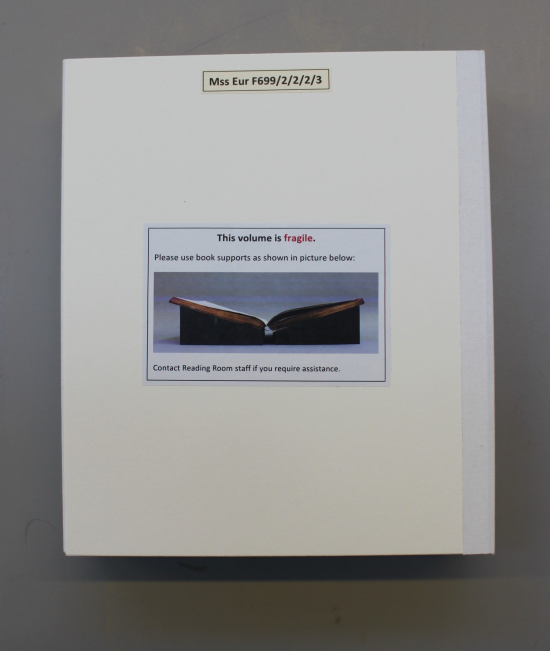 This was a major project, taking two conservators nearly 400 hours, and the fact that Charlotte Canning’s diaries are now accessible in the reading rooms is a source of great satisfaction for curatorial and conservation staff.