Lotus Sutra Project: Conservation of a Scroll with Pre-11th Century Repairs. How Do We Avoid Disassociation?

The Lotus Sutra Manuscripts Digitisation Project at The British Library, is a multi-year project aiming to conserve and digitise almost 800 copies of the Lotus Sutra scrolls in Chinese, with a view to make images and information freely accessible on the International Dunhuang Project (IDP) website. These manuscripts come from a small cave in a Buddhist Cave complex near Dunhuang, in Northwest China, where tens of thousands of documents, paintings and artefacts dating from the late 4th to the beginning of the 11th centuries were discovered in 1900.

Out of the 800 manuscripts included in this project, a large portion of them need conservation work. This blog post covers the treatment of Or.8210/S.3455, and introduces the approach taken when we come across a scroll with historical repairs which are causing damage, but which we do not want to permanently separate from the scroll. 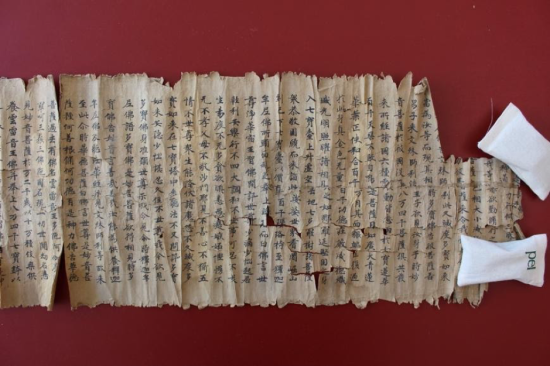 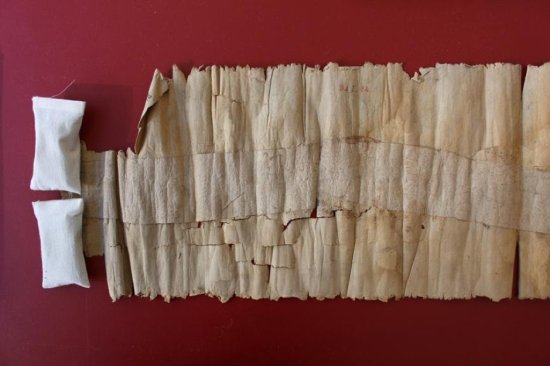 Or.8210/S.3455 is an 8-metre-long scroll with many historical repairs (we know that these repairs predate or date back to the beginning of the 11th century due to the provenance of the items in this collection). Carrying out repairs on damaged scrolls was a common practice in Buddhist monasteries, so we frequently come across historical repairs in the form of paper patches not only in the Lotus Sutra Project, but the Stein collection as a whole.[1]

These repairs are present throughout the scroll in varying sizes, however the two large historical repairs on the 1st and 2nd panel were the most challenging ones in terms of treatment. As we can see from the images above, the historical repairs in combination with the adhesive used were causing extreme distortion. As a digitisation conservator my aim is to ensure the item can be safely handled during digitisation and to ensure the text is visible and accessible so that high quality images can be taken. Not only was the scroll incredibly vulnerable to any handling, but its condition would have also made it impossible to produce suitable images during digitisation. This is why treatment on this scroll was necessary. 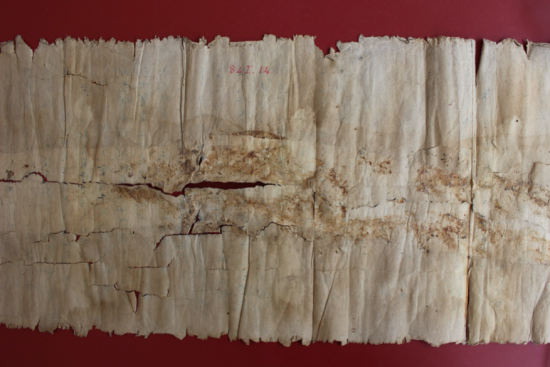 Picture 3: Verso after removal of historical repairs. Excess adhesive can be seen, which required further removal.

The first stage of treatment was to remove the historical repairs. After surface cleaning using a cosmetic sponge, gentle humidification was applied. Patience is key here, as I had to work one small area at a time using a micro spatula to slowly lift the historical repairs. It was important to get enough humidification introduced to soften and swell the adhesive for easy removal, but not so much as the paper would become extremely wet. You can see from the image above, once the historical repairs were removed, the dark crusty areas show how thick the adhesive had been applied, which further helps us to understand the distortions and tensions caused by this. The excess adhesive was further removed using the same technique; gentle humidification and a micro spatula. Any adhesive which was removed was kept in small sample bags for possible future analysis.

Once the historical repairs and the majority of excess adhesive was removed, the panels were flattened under boards and weights. When flattening was complete conservation repairs on the scroll were carried out using toned Japanese paper and wheat starch paste. When the conservation on the scroll was completed, it was time to reattach the historical repairs.

The historical repairs were not reattached fully onto the scroll. Completely pasting down the historical repairs would simply cause the same damage as before. Instead, they were re-attached using some small Japanese paper tabs and wheat starch paste, each tab measures no more than a few millimetres and these are placed at strategic points underneath the repairs to stop any tension and subsequent distortion from occurring. These can easily be removed in the future if necessary, by simply cutting the small Japanese paper tabs, or by introducing gentle moisture to soften the wheat starch paste. It is important to note that the scroll spends the majority of its life rolled up, so the historical repairs were reattached whilst the scroll was rolled up. If they had been re-attached whilst flat there would be much tension occurring once it is rolled up. 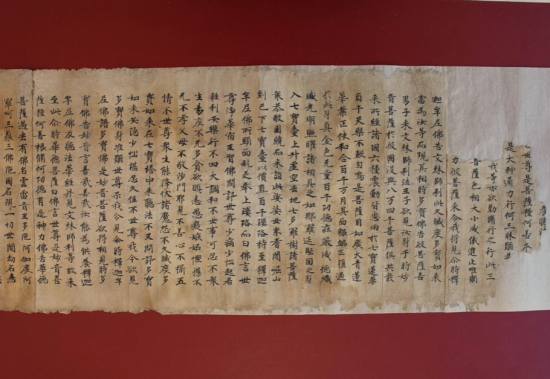 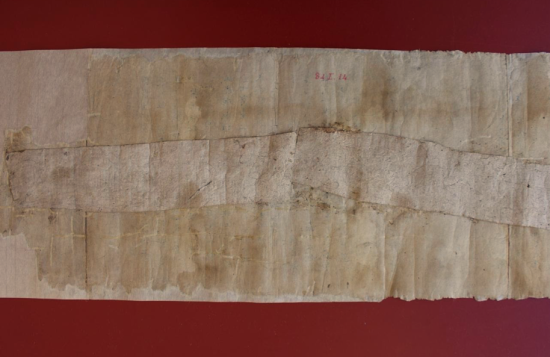 Posted by Christina Duffy at 18:31:39 in Conservation , Digitisation , Paper , Preservation

Posted by Christina Duffy at 6:31 PM