Rolls from the King’s Library: An Unexpected Arrival

What do you do when something unexpected happens? When out of the blue something quite big lands in your hands? This is something that we can all too easily relate to today.

Back in March 2019 this is the question I faced when 85 rolls arrived at the Library in need of cleaning, repair, housing, cataloguing and a new storage space. 85 items are a lot of work to fit into an already busy schedule and it had a significant impact on my work over the following 12 months. 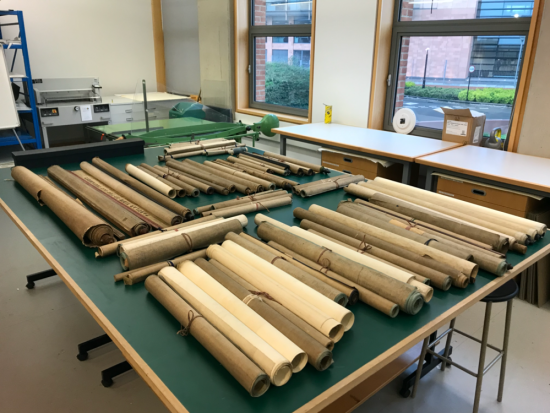 Picture 1: The rolls when they arrived in the BLCC (British Library Centre for Conservation)

In the 1970s, the King’s Library Gallery was re-furbished with new display cases. Then, after almost 50 years, one of the old cases that had been in storage was forced open to reveal a previously forgotten compartment. Inside, they found dozens of rolled sheets formerly stored in the King’s Library, long since established as ‘historically mislaid’ by curators at the British Library. The Museum hastily handed them over.

See photo of the enlightenment gallery before renovation: https://www.britishmuseum.org/about-us/british-museum-story/history

On arrival they were brought to the Conservation Centre for an initial condition assessment. Once it was confirmed that there were no signs of pests or mould I conducted a more detailed assessment of the conservation needs of each roll, liaising closely with the Cataloguer and Curators who would update the details in the catalogue.

I started by assessing each roll individually, recording any conservation treatment required for their safe storage and handling. A spreadsheet was provided with the rolls where I had planned to record for each item whether it needed:

It quickly became apparent that it would not be so straightforward. Firstly, many rolls had other elements that would complicate their repair, boxing and storage, such as: loose or attached labels (paper or parchment), textile ties (of various colours and conditions) and wooden rods (in varying conditions) that also needed to be recorded. But more problematic were the shelfmarks; many weren’t easy to read, some rolls shared the same shelfmark, others were so similar it was hard to tell the difference, and some had shelfmarks that were not listed on the spreadsheet. This made locating each roll in the spreadsheet very difficult, I had to use any other information I could find to identify what was what. 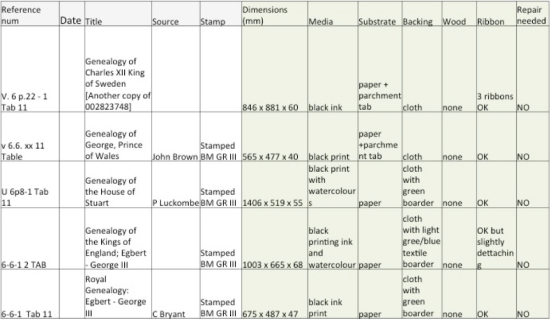 Picture 2: Spreadsheet with added columns for assessment (shaded in green)

Picture 3: Example from spreadsheet of items with similar shelfmarks

As these rolls already belong to the British Library’s collection there should already have been a record of each roll in ABRS (Automated Book Requesting System). However, the Cataloguer had a difficult time locating the rolls on the catalogue because of the unclear shelfmarks. Using all the information he had – date, title, source and stamp, and any other information on the physical items – he searched the various catalogues, electronic and printed ones, and eventually found 53 of the rolls in the catalogue, all of which had been marked as ‘mislaid’. Of the remaining ones, 14 more were found in a manuscript location list drawn up in the 1970s in a notebook labelled 'Location List [Rolls] King's Library', the location being 'housed in 1st case in Gallery', referring to the British Museum’s Enlightenment gallery. Finally, the Cataloguer suggested new shelfmarks, which will be used to label the rolls’ storage boxes. 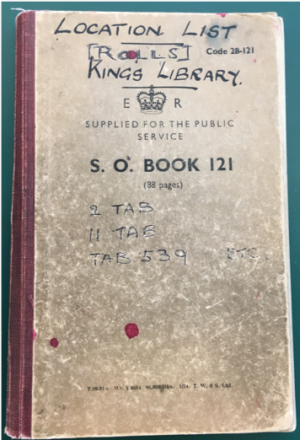 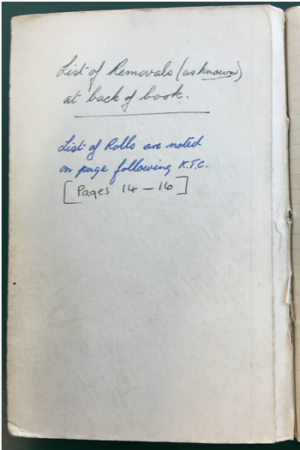 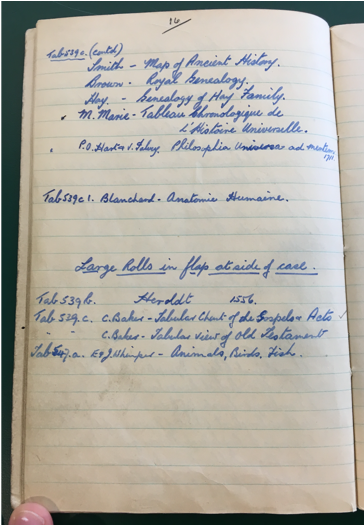 The conservation was straightforward, but lengthy. Every roll had a thick layer of dust that needed to be cleaned, this was done with a chemical sponge, gently lifting the surface dirt. Some also needed repair as they were damaged along the edges, these were repaired from the back of the roll using Japanese tissue paper and wheat starch paste. A few in poorer condition also needed repair from the front using a thinner tissue that added the necessary strength and remained discrete. Once complete, the rolls were put into their custom-made box and sent to their new storage place where they are now accessible for any interested researcher to marvel over. 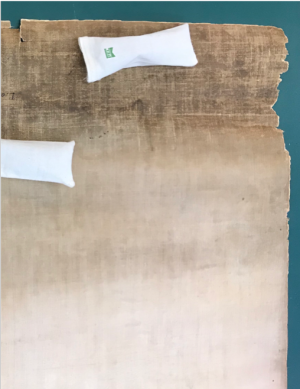 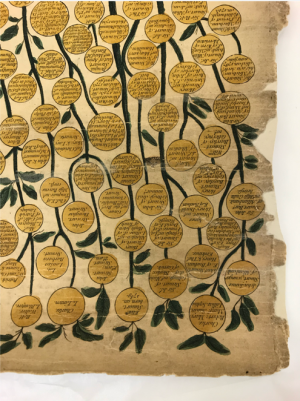 Pictures 7 & 8: Image of before and after conservation repair 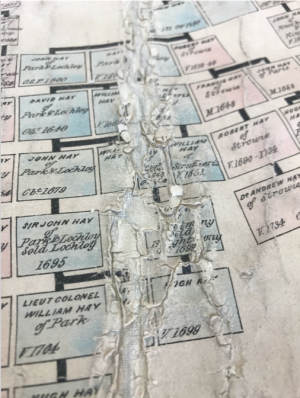 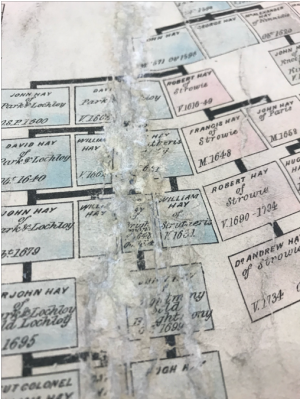 Pictures 9 & 10: Image of before and after conservation repair

To finish I will share why this unexpected arrival was such an exciting one. The collection is of significant value and includes items such as: 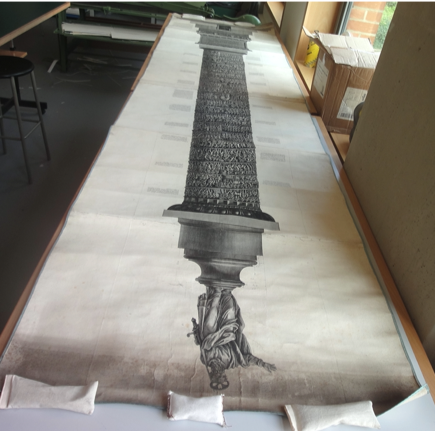 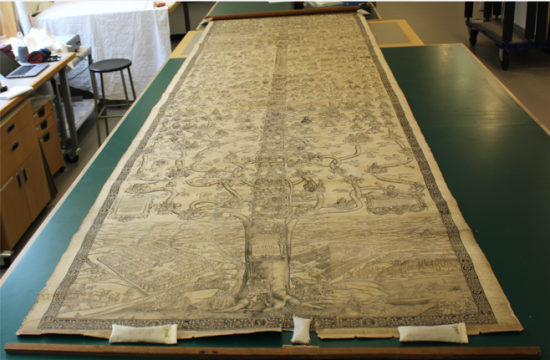 Un-expected things happen. I learnt through this project that we can (and should) plan for the future and do this well to make our work as efficient as possible, but it’s nothing new that many things remain out of our sight and we have to learn to be flexible and adapt as these come along.

I really enjoyed being part of this project of organising (and doing some of) the cleaning, repairing and housing of this amazing roll collection from the King’s Library. It was exciting to be part of this long story, have a role in making this ‘once lost but now found’ collection available for many others to enjoy. 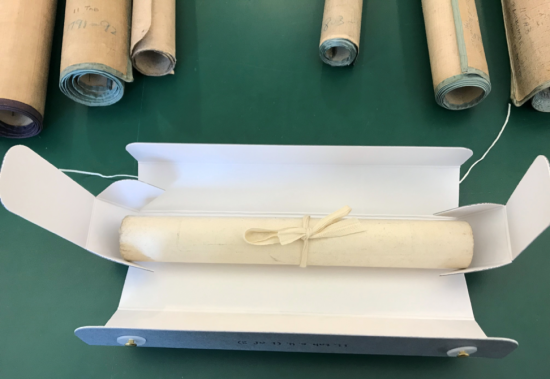 Picture 14: Roll in its made-to-measure box

Posted by Christina Duffy at 09:58:34 in Conservation , Paper , Parchment , Preservation

Posted by Christina Duffy at 9:58 AM