This is the third and final blog post in a series about the British Library Salvage Team and the impact of COVID-19. Previously, my colleagues Sarah Hamlyn and Nicole Monjeau discussed changes made to the Disaster Response Plans and team training in reaction to the evolving situation and types of risk. In this post, I reflect on my experience as a relatively new member of the Salvage Team, both prior to and during the lockdown.

I joined the British Library Salvage Team in late 2019 as an additional aspect to my role as a Digitisation Conservator. I had previous experience of developing salvage plans at a National Trust property, so I was interested to build on this and compare the approaches of the different organisations. I also considered how joining the team would be a beneficial way of developing my knowledge of the Library and its collections, and working more closely with colleagues in the conservation department and from across the organisation. Becoming a member of the Salvage Team requires going through an application process because, in addition to experience of working with collections, members must demonstrate that they are able to remain calm in an emergency, adapt to diverse situations and make decisions under pressure. 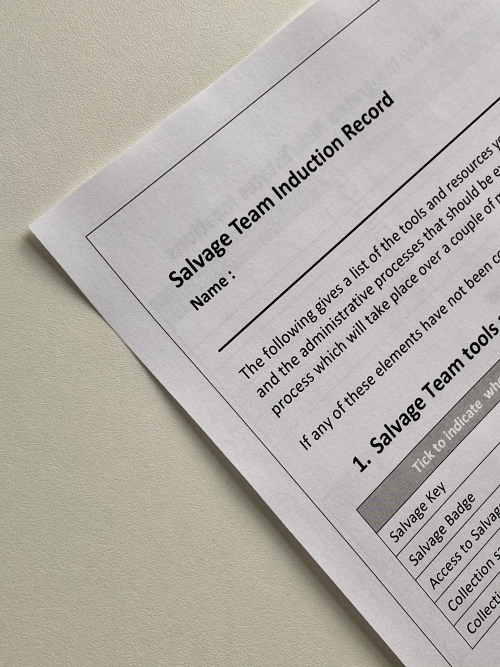 Copy of the induction checklist.

Acceptance to the Salvage Team is followed by a thorough period of induction. It is essential that team members become familiar with the site, existing procedures and the location of emergency supplies and equipment. My main concern upon joining was my limited knowledge of the building, due to its size and complexity and because, as a relatively new member of staff, I had not yet gained the familiarity that develops with time. Some of the most useful training activities for me, therefore, were orientation exercises conducted within the different storage areas. As well as independent induction tasks, I joined the regular team training programme (For more information on training, see the second blog post in the series.) I found the induction process to be positive, detailed and methodical, with a checklist to ensure that each area of activity had been completed. The content of the training served as a reminder that, despite thorough planning, incidents are unpredictable and response must be adapted to each case; which the current situation exemplifies. 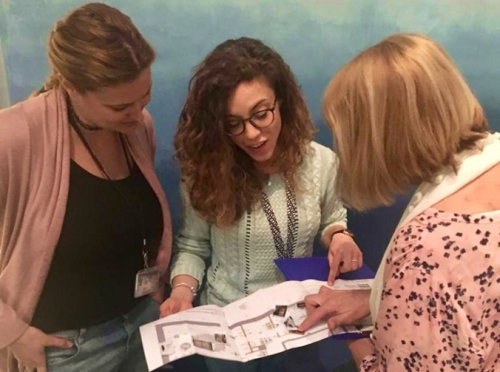 I had not yet finished the full course of induction training when lockdown came into place. My immediate concerns were accessing information, (the shared phones containing the salvage manual were with those who were last on call), and travelling to site.  However, both of these areas were rapidly attended to. Team members were issued with written authorisation to travel in an emergency and instructions of how to book a contracted taxi. We then received copies of the salvage manual and briefing notes detailing revised procedures, which I found particularly important for understanding what was expected of me during this time. A positive outcome is the change to using WhatsApp in place of email for reporting in for duty and general communications. I have found it reassuring that I receive a reminder of who is on call, and the group contact has aided team cohesion. As the lockdown progressed, I grew mindful about further potential challenges, such as managing a salvage response with the requirements for social distancing, navigating the building with the new one-way system in place and responding efficiently having had a long break from my usual work routines. However, the provision of a remote training programme and the regular interaction and feedback sessions that resulted from this, have been constructive and valuable factors in remaining connected and reducing uncertainty. 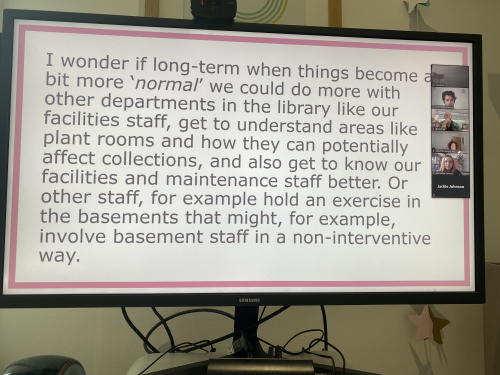 The combination of reading, videos, elearning, written exercises and discussions that comprised the remote training proved an effective learning method. This supported different learning styles and enabled subject areas to be considered from multiple perspectives, providing a more complete picture. Due to the variety of the sources, I learned about incidents and organisations that I was not previously aware of, which were often international examples in which priorities differed to those of the UK. A particularly relevant case for conservators is the Florence Flood of 1966, which is known as a pivotal event in the development of conservation as a profession, but which I had not studied in detail before. I found the discussion sessions especially helpful not only for confirming that others shared the same thoughts, but for filling the gaps in my knowledge and highlighting aspects that I had not considered. It has also been interesting to hear team members’ suggestions and contribute new ideas prompted by study. In the absence of being able to carry out physical practices, this remote training programme has maintained motivation, engagement and skills development. 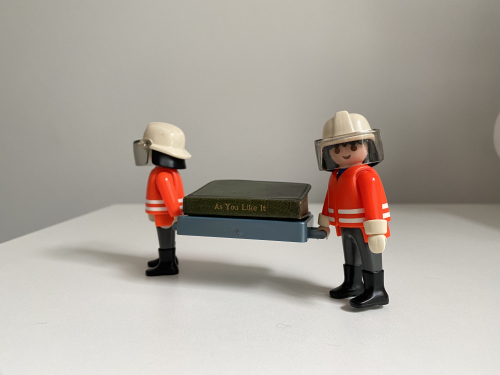 The response to the unprecedented impact of COVID-19 has necessitated flexibility and ability to adapt to an unfolding situation, which are fortunately qualities that members of the Salvage Team already possess. Though this time has been a steep learning curve for all, it has felt that the Salvage Team has become more resilient and creative as a consequence, with this difficult period resulting in a re-focusing of our purpose and approach.