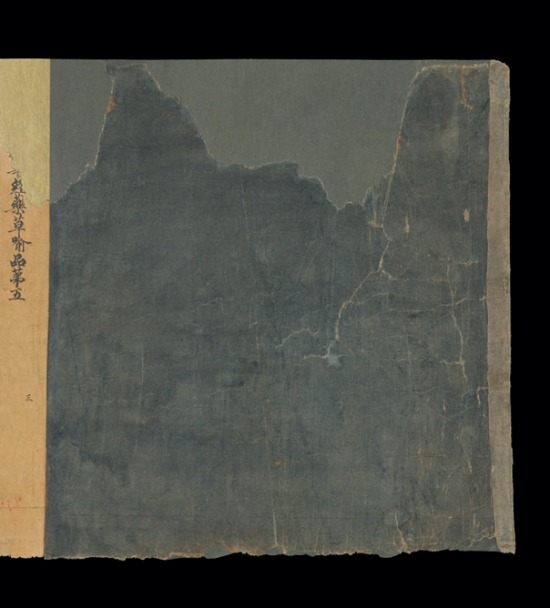 Picture 1: Close up of digitised scroll after treatment.

The Lotus Sutra Manuscripts Digitisation Project at The British Library, is a multi-year project aiming to conserve and digitise almost 800 copies of the Lotus Sutra scrolls in Chinese, with a view to make images and information freely accessible on the International Dunhuang Project (IDP) website. These manuscripts come from a small cave in a Buddhist Cave complex near Dunhuang, in Northwest China, where tens of thousands of documents, paintings and artefacts dating from the late 4th to the beginning of the 11th centuries were discovered in 1900. Out of the 800 manuscripts included in this project, a large portion of them need conservation work. This blog post covers the treatment of Or.8210/S.3796 which measures over 10 metres long.

What is particularly striking about this item is the blue cover or protective flap at the beginning. Whilst it bears a few stains from water damage, the colour is incredibly vivid considering the age of the item. It is unusual in this project to see scrolls which are 100% complete, from the front cover to the very last panel, so having the front cover present, in addition to its striking colour, makes this item quite special. In addition, part of the thin wooden stave on the cover is still present, a silk tie would once have been attached to this, however it is now gone.

The use of blue paper (typically dyed using indigo) for sutras grew in popularity in China from the Tang dynasty (618–907 CE) onwards, it flourished in Korea and Japan around the same time and can also be found in other cultural traditions beyond East Asia. By the end of the Dunhuang period, and in later Chinese tradition it became common to use silver or gold ink on dark blue paper for the finest manuscripts [1]. See this fragment of scroll Or.8210/S.5720, which is part of our wider collection, as an example.

Re-use and recycling of paper was a common practice carried out by the monks in Dunhuang [2]. It is possible that the cover of Or.8210/S.3796 was sourced from some left-over paper which had previously been used for one of the finer sutras written on blue paper. 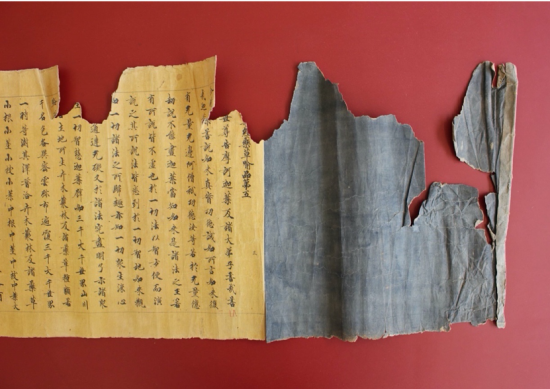 The losses which you can see in the before images were a result of historical rodent damage, when the scroll was examined closely small teeth marks could be seen. As the damage occurred when the scroll was rolled, there is a repetitive nature to the losses which get smaller as we move away from the beginning of the scroll. Due to the presence of these numerous large losses conservation treatment had to be carried out in order to stabilise the scroll for digitisation.

The first step to treatment was creating a blue repair paper to match the cover. At the IDP conservation studio our usual repair papers are hand dyed in relatively large batches using fabric dye, this is so that we always have lots of different tones and colours at hand. However as blue isn’t a typical colour we come across in this project, some experimentation had to be carried out in order to get the correct blue shade for the repair paper.  Dyeing was tried at first using the usual fabric dye, however the right blue hue still wasn’t accomplished after a few attempts, so I decided to tone the paper using a diluted acrylic paint instead, which was more successful and efficient. 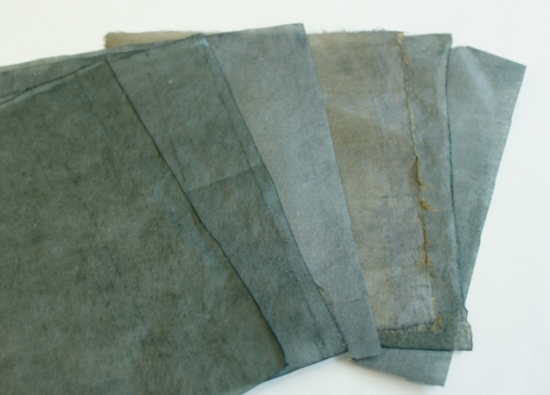 Finding the correct colour when custom toning repair paper is typically a matter of trial and error. Once I had found the correct combination of colours, I used a Japanese paper which had previously been dyed a yellow tone and this created the perfect base for applying the diluted blue acrylic wash. As the verso of the cover is lighter, once dry, the blue repair paper was then lined onto a lighter, yellow toned paper using diluted wheat starch paste. My custom toned repair paper was then used to infill the losses present on the cover of the scroll. For the remaining losses throughout the scroll, a yellow toned paper was used, this was a much easier source out of our existing repair paper collection!

As you can see from the after images, the scroll can now safely be handled and digitised by trained internal staff. It is a unique item in the project, which was a pleasure to work on. All in all, a successful treatment!

The digitised scroll is available to be viewed via this link thanks to Jon Nicholls.