Textiles in Ethiopian Manuscripts at the British Library

Little is known about the secrets that Ethiopian Christian manuscripts retain inside their covers.  In addition to the texts that cover the full range of topics, from religion to magic, or from poetry to medicine, the iconic bindings of Ethiopian manuscripts hold more than we might imagine. Distinguished by their hard wooden covers or elaborate tooled leather bindings, some codices have preserved historical textiles attached to the inner surfaces of the book boards. These rare fragments have been protected from environmental damage and are in excellent state of preservation.

It’s important to note that there are conservation challenges for this type of material, one of the main roles conservation plays is to limit damage by the effects of light, temperature and pollutants, whilst still providing public access to the manuscript collections.

As curator for the Ethiopian Collection I have been working towards uncovering the number of Ethiopian manuscripts in its collection that contain these textiles inside their bindings. Formed from three major acquisitions, the BL today holds more than 600 Ethiopian manuscripts. The Harley Library collection included the first accession of Ethiopian manuscripts in 1753. In 1846, another 74 codices were acquired from those collected by missionaries of the English Church Missionary Society.  The bulk, and the largest group of books incorporated into the collection, came from the punitive expedition to Ethiopia in 1868.  The Magdala (Maqdala) collection, resulting from the British expedition sent to Ethiopia in 1868, consists of 349 manuscripts from the royal library assembled by King Tewodros II (1855-68).

Separately, in June 2021, the results of a pilot research study conducted on textile pastedowns on the inner covers of 154 Ethiopian manuscripts held in Ethiopian repositories and Western institutions, including the BL’s, were presented at the “Textiles in Manuscripts” workshop. At this workshop, organized by The Book and the Silk Roads project at the University of Toronto and hosted by the Institute for Advanced Study in Princeton, 500+ participants explored the large variety of textiles from across Eurasia found inside books, covering manuscript paintings, in bindings, and on inner and outer covers. Many of the textiles found inside the Ethiopian manuscripts in the study were produced in textile centres in India, Europe, and the Near East and were part of Ethiopia’s engagement in vibrant Indian Ocean/ Red Sea trade networks, or brought as gifts. A striking Iranian textile dating from the 19th century can be seen in Fig. 1, and a Turkish brocade from the late 16th to early 17th century has been preserved in manuscript Or 534, Fig. 2.

A multi-disciplinary team of scholars including textile experts from the V&A and Manchester Metropolitan University is now in place to conduct an ambitious research project that will address questions arising from the information that can be uncovered from these textile fragments. The manuscripts date from the 15th to the 19th centuries. The project will work to reveal such properties of the textiles as composition and structure, that will assist researchers in determining their time of manufacture and place of origin. This information will strengthen the investigation of Ethiopia’s role in the global textile trade network, one that stretched from East Asia to Western Europe. The team will seek to understand the use of textiles in manuscript bindings from cultural, social, and artistic perspectives. One may ask whether they were a primary component of the binding process or added to the book as decorative elements? What was the role of imported textiles in society? Was there a religious meaning ascribed to them? An important aspect of this research is the use of textiles to date uncertainly dated manuscripts.  Finally, the project will help uncover changing socio-economic norms in Ethiopian society from the 15th to the 19th centuries.

Textile pastedowns preserved inside 15th- to 19th-century Christian Ethiopian manuscripts represent a rare collection of material evidence that will assist researchers and conservators in their work with late medieval and early modern textiles and objects from Ethiopia and across Eurasia. 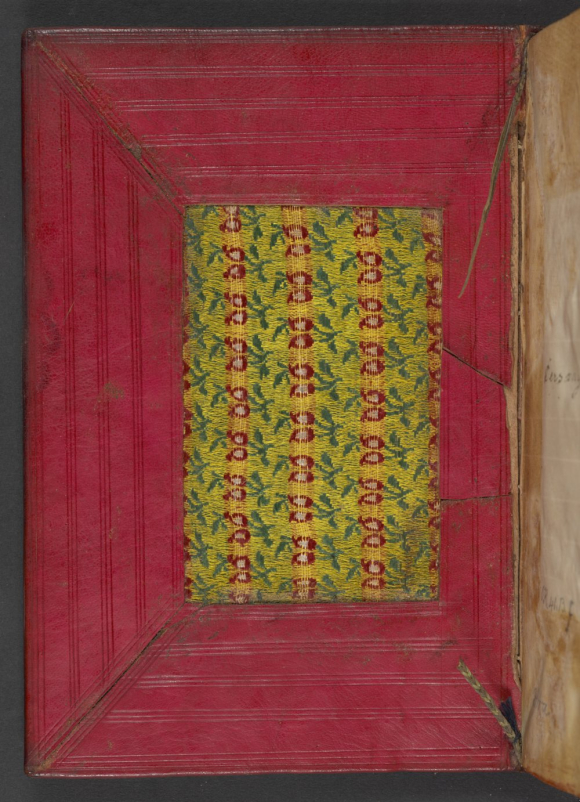 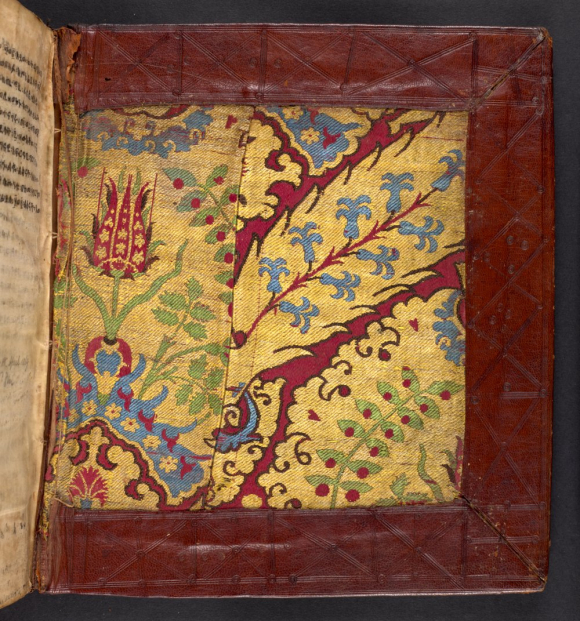 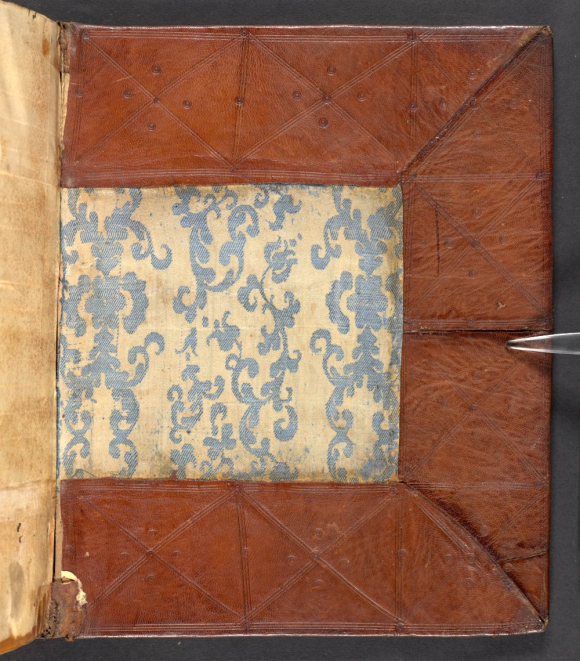 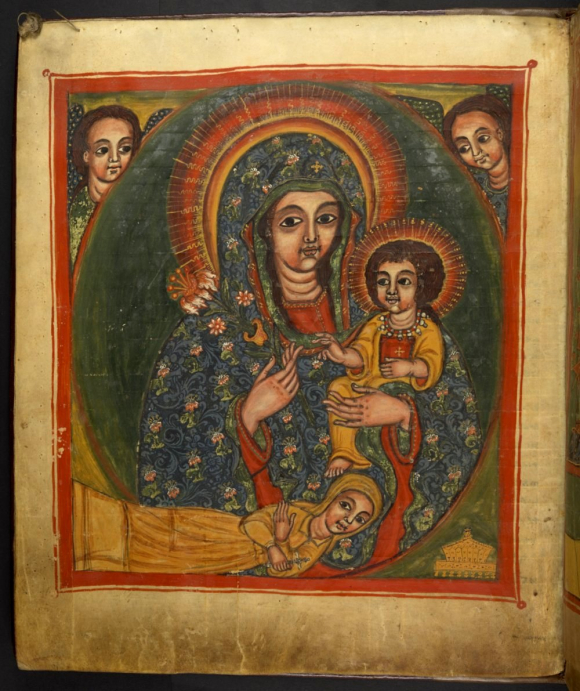 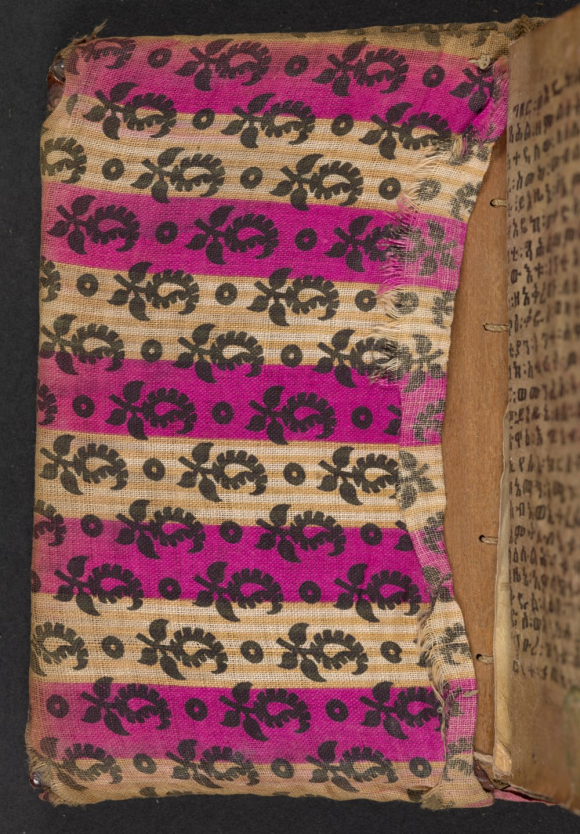 Conservation of the Granville Archive papers

The Granville Archive, recently acquired by the British Library, includes a vast collection of letters and papers relating to British national life in the 18th and 19th centuries. These papers had been unknown to researchers until their acquisition and shed particular light on the personal and political lives of aristocratic women of the period.

Two caches of these letters recently arrived in my care in the conservation studio, Add Ms 89382/3/1 and Add MS 89382/3/4. Add Ms 89382/3/1 contains Georgiana Duchess of Devonshire own private correspondence with her husband and discussion of the latest books and politics, perennial concerns about reputation, scandal and money. Add MS 89382/3/4 consists of the original letters of the Duchess to her daughter Harriet including the ‘Blood letter’, written with the duchess’ blood. 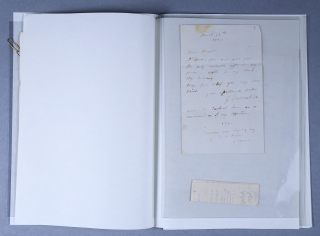 Assessment of characteristics, condition and risks during use:

When brought for conservation, the letters (written with iron gall inks), were housed unbound within two folders. Nevertheless, some letters retained evidence of past interventions. These include a sewing along the left edge or along the centre-folds, and gilded edges which suggests that they had been previously bound. Enclosed between the letters were three paper wrappers. Each contained a hair lock belonging to one of the Duchess’ children and to her sister.

The letters exhibited surface and ingrained dirt - especially along the edges -, discolouration, edge tears, and losses. Some of the seals used to close the letters had cracks. The hair locks, loose in their paper wrappers, were brittle. In their present state both the letters and the hair locks were not fit for use as they were at risk of further damage, loss, and theft. 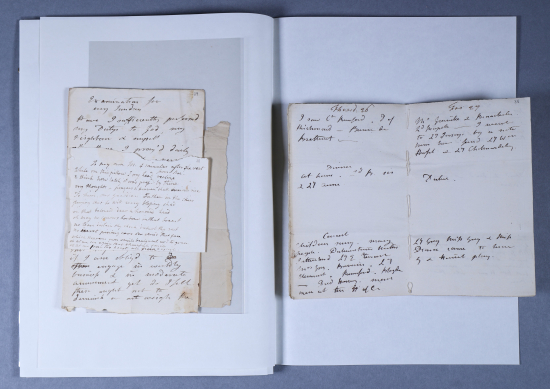 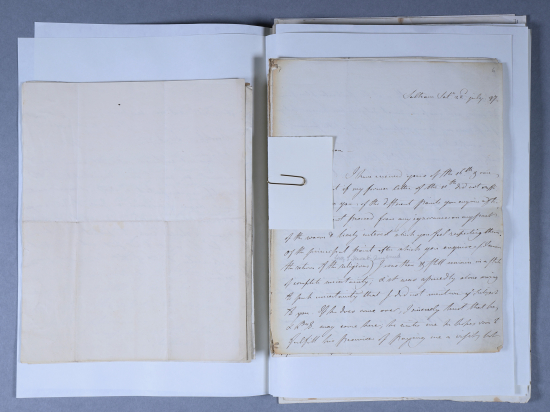 (/1) Folio 6 sewn together with following folios. 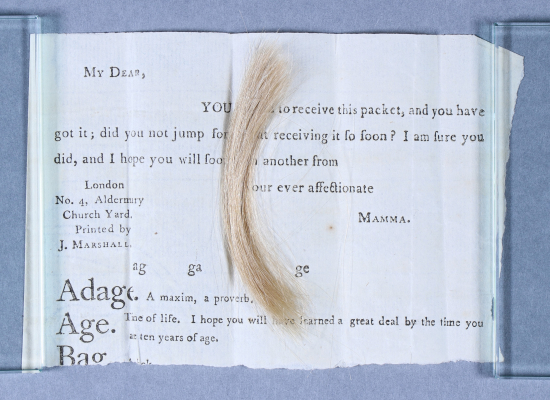 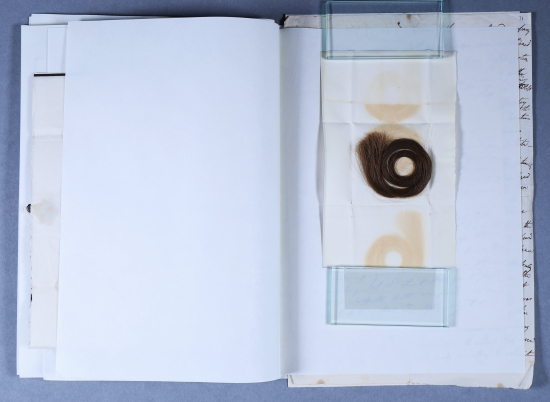 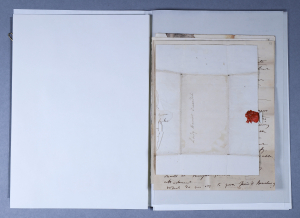 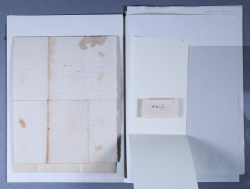 Aim of the conservation treatment and Planning and decision-making process:

The aim of the conservation treatment, as discussed with the curators, was to make these collection items available to researchers for consultation and possibly for display in an exhibition.

The conservation challenge posed consisted of balancing the preservation of the integrity of these vulnerable items - including their material and non-material aspects and values - with their use.

The decision-making process took into account many aspects discussed and agreed with the curators and the cataloguer. Planning of the work involved a vast range of considerations including the condition of the items, their access requirements and frequency, intended uses after treatment, storage, available time for treatment and resources. Other considerations regarded the conservation needs of the items, the goal of the treatment and practical techniques for housing and mounting for the letters and the hair locks with their wrappers respectively. Expectations about the functionality and appearance of the items after treatment were also discussed.

The photographic and written documentation about the items’ materiality and condition recorded how the items were before treatment and will be used in the future, should these items will undergo further conservation treatment.

The practical conservation treatment was carried out using archival quality, durable and reversible materials which have been long used in conservation, such as for instance mounting boards and end-leaf paper.

The hair locks and paper wrappers:

For the hair locks a stabilisation technique was borrowed from the conservation of textiles and historic wigs, as it was considered the most unobtrusive and safest way to preserve these delicate items. A mock-up was prepared to test the stabilisation and mounting technique of hair before applying it to the collection items.

This technique consisted in arranging the hair locks on a polyester conservation net and stabilising them by weaving a polyester thread through several layers of hair at various depths. Once the sewing was complete, the net of each hair lock was then mounted by means of Japanese paper strips, between mounting boards, together with its paper wrapper.

Polyester windows on both sides were used for the paper wrappers as they retained evidence on both recto and verso, for instance the creases of their original folds, or handwritten notes. Because of their weight, each mounting board solution included two guards made of Japanese paper reinforced with linen on the left edge to be joined to the new binding through holes. The mounting boards were used because they offered rigidity during handling by researchers, thus avoiding damage to the brittle historical hair. The polyester windows enabled both hair and wrappers to be safely looked at without being touched. 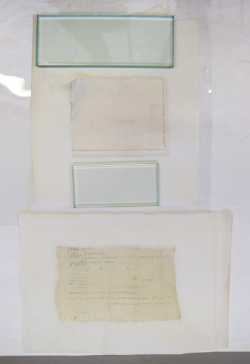 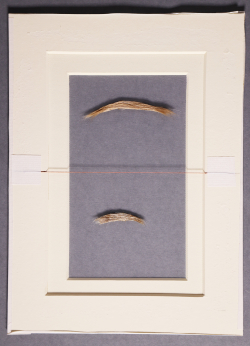 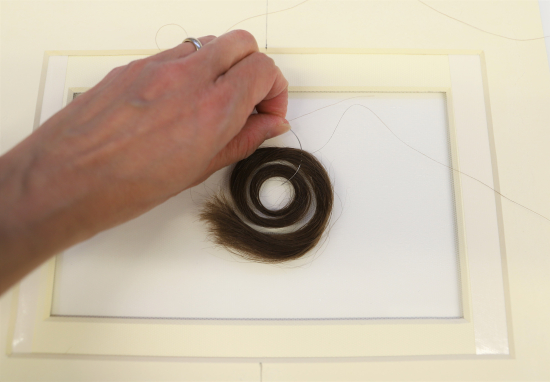 The surface cleaning of the non-written edges of the letters was carried out with a vulcanised smoke sponge and a soft brush to allow for a gentle cleaning of the paper supports. The smoke sponge has the additional advantage of trapping the dirt within its structure, without leaving residues in the paper support. For the tears repairs, re-moistenable tissue prepared with Japanese paper and wheat starch paste and methylcellulose as adhesives was chosen because it has the benefit of releasing a slow and controlled amount of moisture in the paper supports. This is especially useful in the presence of iron gall inks whose degradation speeds up with humidity. Japanese Kozo paper has long fibres, thus offered a strong bond with the paper support of the letters, has neutral pH and is stable over time. Losses that could cause further damage during handling were infilled with Kozo Japanese paper.

The cracks of the seals were assessed as being stable, that is, at low risk of further damage when handled carefully. For this reason, no treatment was considered appropriate.

Next, the letters were attached - staggered, with wheat starch paste - along their left edge to archival paper end-leaf guards. A pamphlet was sewn through the centre-folds with linen thread. The sewing thread used to keep some loose letters together, was cut as it was causing damage to their paper supports during handling, but was kept in place.

The Blood letter was given additional protection in a polyester pocket, because of its historical value and potential risk of damage during handling.

Where the text of some letters ran up to the central folds on both recto and verso, the end-leaf paper guards attached to the letters, were shaped to avoid concealing the text. 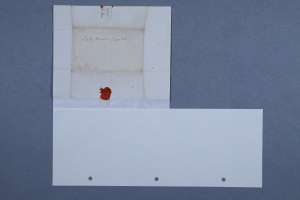 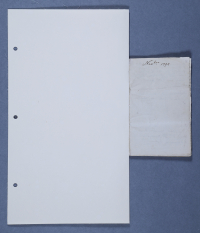 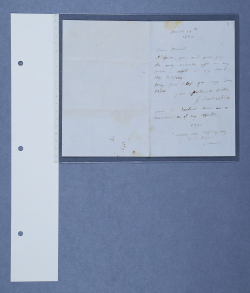 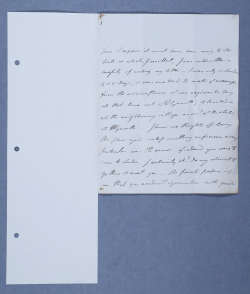 When dry, the guarded letters and the mounted hair locks and wrappers, were bound in two post-binders. This type of binding was chosen over others, because of its versatility. It allows for housing a

variety of letters and if necessary, for the easy temporary removal of the required letters or mounting boards should they be accessed separately - for instance for an exhibition. 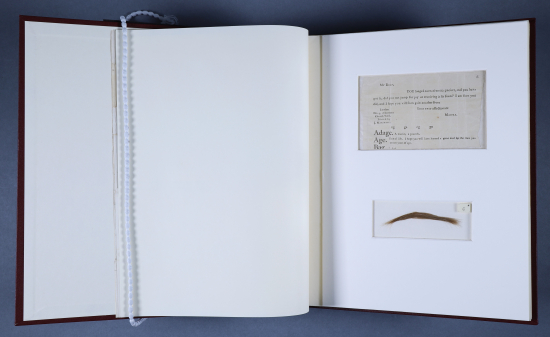 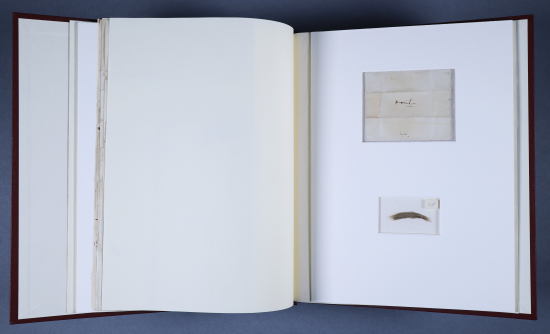 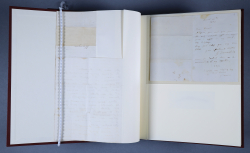 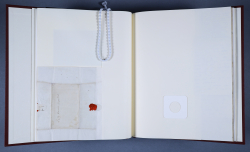 (/1) Head edge with board compensators 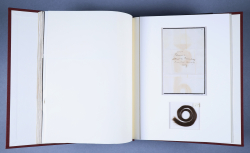 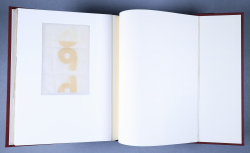 As a result of this conservation treatment, all the evidence and features of these unique and fascinating items were retained and relevant letters never disclosed before are now accessible to the public for the first time.