Terror and Wonder: The Gothic Imagination

Our next major exhibition ‘Terror and Wonder: The Gothic Imagination’ opening on 3 October 2014 will explore Gothic themes in art, architecture, literature, music, film and fashion. It will look at the impact British Gothic had, particularly in literature, on Europe and North America, and will explore our continuous fascination with the sublime, sinister and the supernatural in human nature – although ever present – first fully explored through the Gothic imagination.

The exhibition will be showcasing some key items from our collection including the first Gothic novel: The Castle of Otranto written by Horace Walpole* and published on Christmas Eve, 1764; hence the exhibition taking place this year on the 250th anniversary of its publication. It is rare that such classic items from our collection find their way to the conservation studio prior to major exhibitions as most such iconic items would have already undergone conservation in the past. I was therefore surprised, but at the same time very excited, when I saw The Castle of Otranto on the list of items requiring preparation for the exhibition. 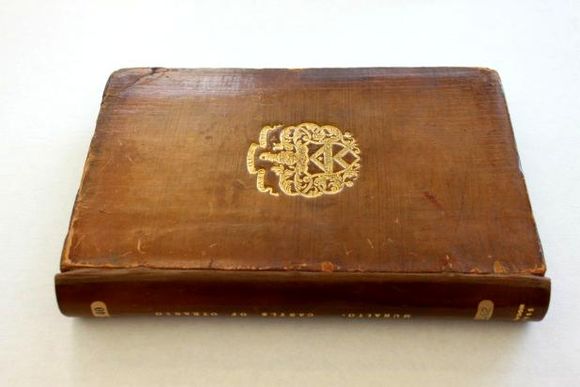 The leather bound volume of The Castle of Otranto with the original gold tooling on the front board showing Walpole’s coat of arms.

Needless to say, the small leather bound book looked in pristine condition and the only work it
required was minor trimming of the guards (additional strips of paper attached to the spine side leaf edge) at the front of the book. The volume was probably re-backed about 25-30 years ago. The first few folia must have been loose, as they were re-sewn on guards which were left a little bit too long. 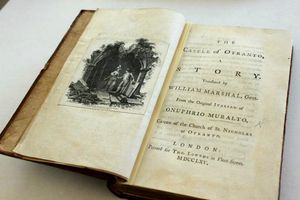 The volume with guards before trimming. 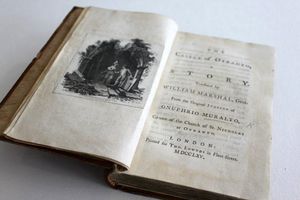 The volume with guards trimming.

The volume with guards before and after trimming.

Other volumes for the exhibition required more conservation work including: boards, folia or spine
re-attachments, repair to binding edges or corners, and tear repairs to folia within the volumes. In
total, conservation received 35 items from our collection for preparation, and almost half of those
were volumes. For example, Ann Radcliffe’s The Mysteries of Udolpho had a loose front board, while the spine had to be repaired and re-attached on Beardsley’s The Yellow Book. 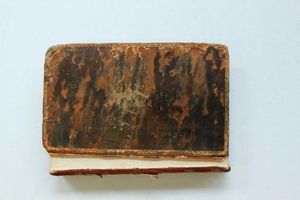 The Mysteries of Udolpho with a loose front cover 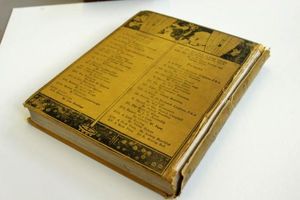 The Yellow Book before conservation. 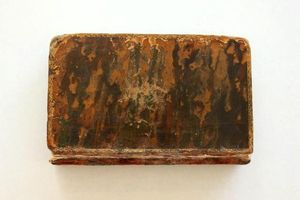 The Mysteries of Udolpho after conservation. 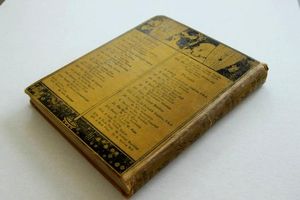 The Yellow Book after conservation.

Both items after conservation.

The British Library has a rich collection of Gothic material, but a number of items, almost double the amount of items requiring conservation, will also be loaned for the exhibition from various museums, galleries, libraries and institutions across the United Kingdom. Conservation will be involved with condition checking prior to the exhibition for some of those items, while others will be checked on arrival. The key loans for the exhibition include paintings, posters, furniture, costume and film. Visitors can look forward to nearly 30 film posters, props from Stanley Kubrick’s film The Shining, photographs and investigative report from a haunted rectory, as well as a rare Limoges enamel casket belonging to Horace Walpole which depicts the murder of Thomas Becket.

On a personal level, I was very pleased to be asked to mount an engraving showing the view of
Strawberry Hill. Strawberry Hill was the eccentric and idiosyncratic home of Horace Walpole built in the Gothic revival style. His home was also the inspiration for his writings; most famously the
setting for The Castle of Otranto. 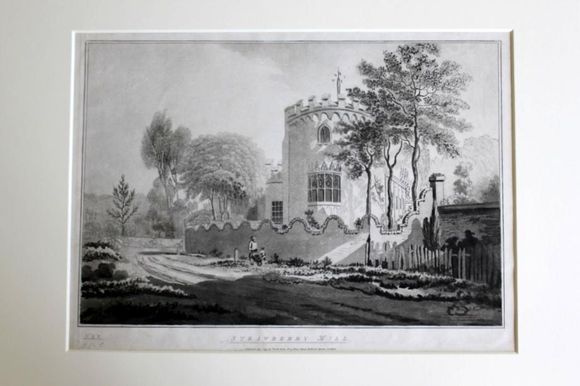 The view of Strawberry Hill near Twickenham mounted in cream museum board.

I first visited Strawberry Hill when it was still in the first phase of restoration, and was  fascinated by its history, significance in the development of the architectural style, connection to the Gothic novel and… the papier mâché ceiling! Horace Walpole once famously said that his buildings, like his writings, were made of paper and would be blown away 10 years after his death.** He obviously underestimated both the strength of paper and his writings, not to mention his lasting contribution to the new literary genre and the Gothic Revival in architecture.

The current exhibition will bring the story of Gothic to the present times, showing our enduring and continuous fascination with the romance of the medieval past, as well as the darker side of human nature and the supernatural!

I would like to thank Tanya Kirk and Tim Pye, the curators for the exhibition, for their help with
the blog and the invaluable information provided on the content of the exhibition, as well as
references for the quotations included.

*Horace Walpole, the youngest son of Britain’s first Prime Minister, was a man of letters, historian,
collector and an influential social commentator and trendsetter of his times.

**Horace Walpole’s letter to his cousin, Henry Conway, on Aug 5 1761: 'My buildings are paper, like my writings, and both will be blown away in ten years after I am dead.' He also expressed a similar sentiment in a letter to Anne Fitzpatrick, Lady Ossory, on Aug 11 1778: 'I am no poet, and my castle is of paper, and my castle and my attachment and I, shall soon vanish and be forgotten together!'