Iwona Jurkiewicz reports on the installation of an extraordinary and iconic banner on exhibition for the first time outside Poland at the British Library's latest exhibition: Russian Revolution: Hope, Tragedy, Myths. It can be seen until the exhibition closes on 29 August 2017.

It is a well-known truth that external attractiveness bears little relation to the essential internal qualities of a person. This time, the old saying: ‘beauty is only skin deep’ proved to be true for a banner.

The 101st Soviet Rifle Regiment banner captured in the 1919-20 Soviet–Polish War by the victorious Poles is very plain and unassuming in appearance. It is, however, of enormous value, being the only surviving banner from that conflict still held in the Polish collections.

A great number of other banners were captured during the Soviet-Polish War and kept in the Polish Army Museum in Warsaw. In the 1950’s all but this one were ordered to be returned to the Soviet Union (hence its unique status). 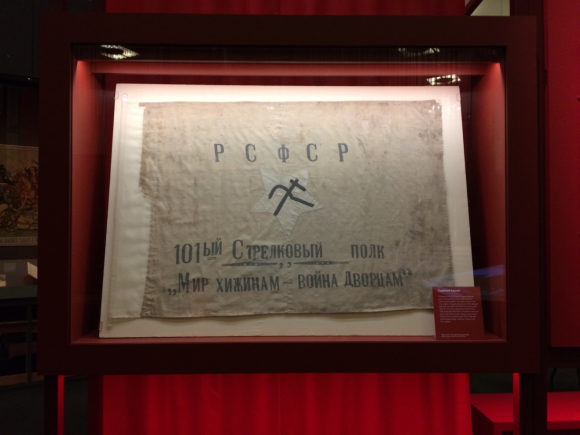 The banner of the 101st Soviet Rifle Regiment with the popular propaganda slogan of the time: ‘Peace to huts, war to palaces’.

The banner has been borrowed from Warsaw for the Russian Revolution: Hope, Tragedy and Myths Exhibition together with a much more visually appealing hat of a Red Army soldier, known as Budenovka. 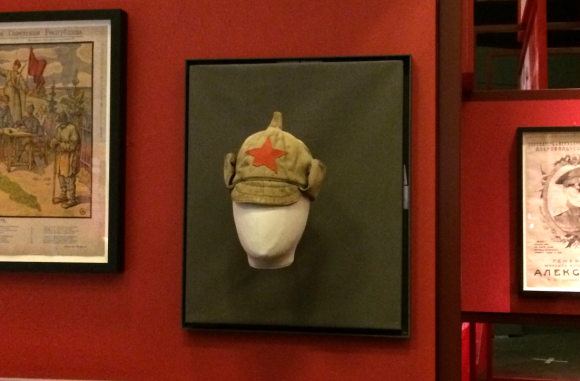 Yet, it was this plain looking banner, with its twists and turns of history that go beyond the Russian Revolution, rather than the cute red hat, that captured my attention.

The current monochrome appearance of the cotton ground is misleading since it was originally red, and the star stitched in the middle of the banner with the early emblem of the Soviet state of a hammer and sickle was - against all expectations - white.

We know this thanks to the detailed documentations of all captured banners made between 1930's-1950's published in a book on trophies seized during the Soviet–Polish War by Jarosław Pych1. 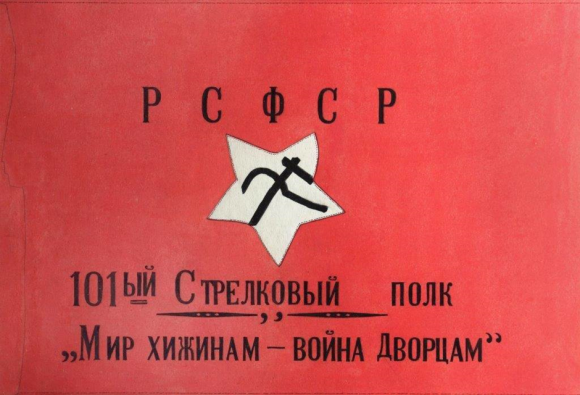 Unfortunately, this iconic item lost its original colours in the course of the long term display and due to the poor stability of the dye used. It now, indeed, seems very plain and unassuming. However, the post Second World War Soviet intervention gave it the status of the only surviving banner in the Polish Army Museum collection, and this added to its already great national significance. The banner has never been displayed abroad before, and it was conserved prior to the Russian Revolution exhibition by the Textile Conservation team based in the Polish Army Museum and led by Jadwiga Kozlowska, who also couriered the item for the British Library exhibition. Jadwiga Kozlowska with the banner.

Her presence during the installation proved vital. The banner, usually displayed in portrait orientation in Warsaw had firm attachment – a Perspex rod - on the short side, but not the long one as was necessary for the landscape orientation of the case in the Russian Revolution exhibition. 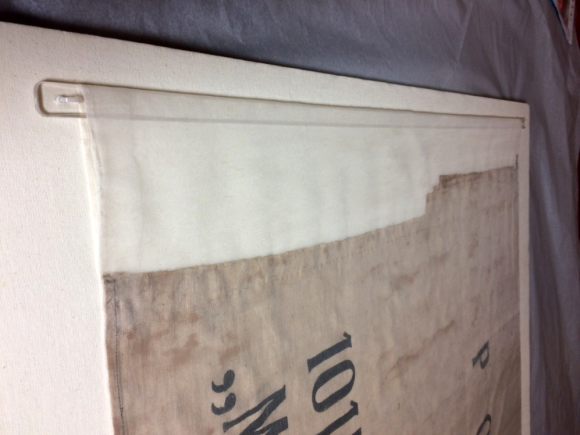 The Perspex rod attachment of the banner. 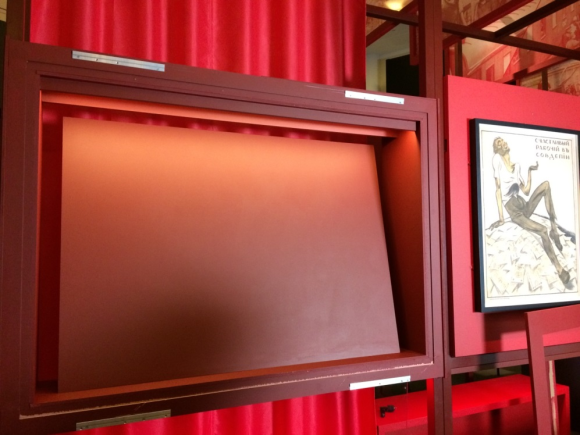 Landscape orientation of the display case.

This situation was promptly remedied by Jadwiga Kozłowska who was able to stitch the crêpeline facing the banner alongside the top edge using an invisible polyester thread. 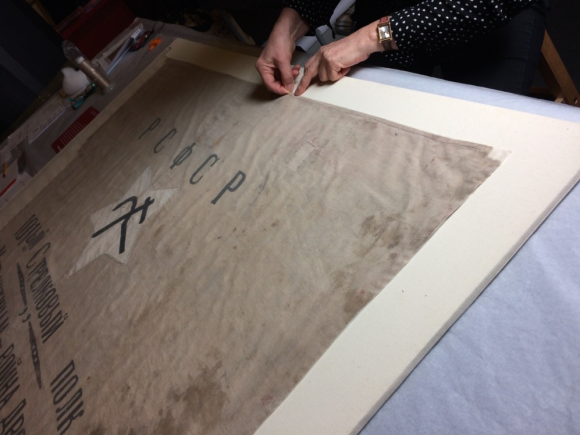 Jadwiga Kozłowska attaching the banner to the supporting board.

This enabled a secure display of the item in landscape rather than portrait direction. The banner is displayed on a slope within the case, and the supporting board is secured using acrylic clips. 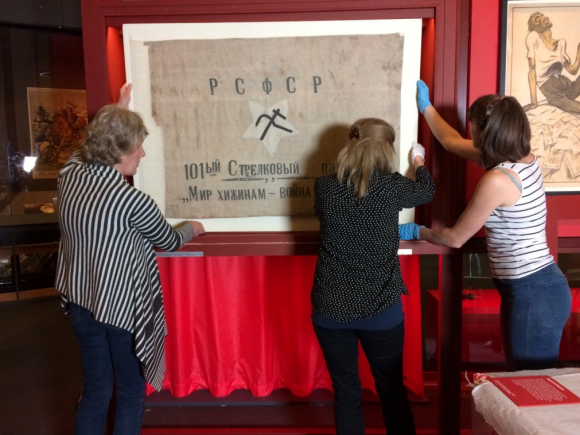 The final installation of the banner.

The installation of the banner with such a chequered history couldn’t have been straightforward, but nothing proves impossible with teams of dedicated exhibition, conservation and loans registry staff!

I would like to thank Jadwiga Kozłowska for not only helping with the installation, but also providing the information about the banner.