A novel, a writing machine and a leafy square in London

Front cover of Len Deighton's classic of realistic fiction, a detailed and perceptive account of a bombing raid in 1943 through the eyes of protagonists on both sides of the Channel, published by Jonathan Cape in 1970. Image of Raymond Hawkey designed dust-jacket graciously supplied by Edward Milward-Oliver

According to Matthew Kirschenbaum of the Maryland Institute for Technology in the Humanities (MITH), the first novel to be written on a word processor was Bomber published by Len Deighton in 1970. He explained his thinking in an article in The Slate, 1 March 2013, “The Book-Writing Machine”. The subtitle reads: What was the first novel ever written on a word processor?

The machine was IBM’s Magnetic Tape Selectric Typewriter (MT/ST). Its primary unit weighed 200lbs (ca 91 kg) and when Len Deighton leased it in 1968, a crane had to be used to get it into his house on Merrick Square, just south of the Thames in London. It is not far from Borough Market, a mere six Underground stops on the Northern Line from where the British Library stands today.

Houses on Merrick Square as it is today. Screenshot image from Google Maps street view

It was Deighton’s personal assistant Ellenor Handley who mastered the new technology and there is a wonderful account in the article of the integral role that she played in bringing the writing to fruition, along with the author’s use of maps, weather charts, colour-coded and cross-reference notes, and tags in what was a very complex creative operation.

The article briefly explores the role of the MTST: “At the same instant a character was imprinted on the page from the Selectric’s typing mechanism, that keystroke was recorded as data on a magnetic tape cartridge. There was no screen...”.

When I visited Maryland a few weeks ago I was given the opportunity to see a similar machine that MITH has obtained. It is awaiting some technical care and restoration to bring it back into operation but it already sits in pride of place along with a copy of Bomber in the newly established home of the institute where some of its collections of computer hardware, disks, manuals and printouts are prominently displayed.

Matthew Kirschenbaum kindly sent me a photograph, indicating that this is a Model II, which has a single tape reel whereas Deighton’s would have had two tape reels. 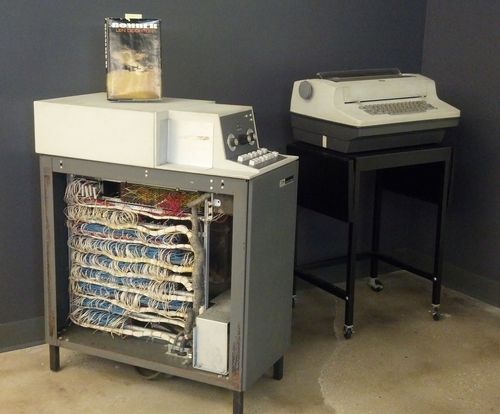 Photographs in the Science & Society Picture Library suggest that there is at least one in the Science Museum of the UK. In Europe the machine was known as the MT72 and it was built in the Netherlands. Some further information about typewriters can be obtained from IBM's website.

For the curator, the article is revealing in other ways. It shows how digital academics and scholars are advancing their research, their concern for the materiality of the intellectual process, their interest in the digital practices of writers, artists and scientists; and it is scholars like Kirschenbaum that libraries and archives will be serving in the coming years and decades.

We can look forward to much more. There will be a book entitled “Track Changes: A Literary History of Word Processing” from Harvard University Press. I cannot wait to see it.

Information about Len Deighton himself can be found on the delightful website The Deighton Dossier. He is someone who has always been technically oriented, as is evident in his diverse writings including topics such as the pen and aeroplane engines; no doubt his use of computer technologies for writing has continued to match ongoing developments over the years. A biography about Deighton is being prepared by Edward Milward-Oliver, who was recently interviewed by Jeremy Duns