The AHRC has recently announced a Big Data Research call. With regards to British Library engagement the call states the following:

The British Library (BL) is interested in working with successful projects in accessing and utilising their large-scale sources of data. To enable BL to work most effectively with relevant projects, they request that applicants contact them at the earliest opportunity to discuss the details.

The BL have already made available large digital data sets through the British Library Labs initiative, which can be freely accessed at http://labs.bl.uk/.

Other material may also be available, but may involve more complex technical or licensing considerations and require some work to make this accessible to applicants. If you wish to access content not currently readily available, you should contact BL as soon as possible to assess challenges, costs, or scheduling.

The British Library has Independent Research Organisation status, and is therefore eligible to apply for funding under this call. Applicants may also include costs incurred by the British Library in making their digital content available or providing other supporting activities.

Queries should be directed to labs@bl.uk

We expect that there will be a substantial number of approaches to the British Library to partner in proposals as well as to provide content. We therefore wish to elaborate on the text in the call to ensure that any requests for collaboration or content provision proceed smoothly.

There is a possibility that we will have more requests to partner than we can support. In light of this, we are introducing a transparent selection process to manage requests for partnership including a proposal review meeting during which proposal summaries will be evaluated and selected.

In some cases, content provision will be very straight forward. In others, we will request content preparation, license clearance, extraction, packaging and so on to be costed into the proposals. We therefore wish to reiterate that researchers planning to use our content in a project proposal for this call and requiring a letter of support from the British Library contact labs@bl.uk as soon as possible, ideally not after mid to late August.

The British Library digital scholarship team announced the winners for its first annual British Library Labs Competition. Open to all, the competition seeks to find innovative digital scholarship ideas that showcase our digital collections. Along with a cash award, the programme enables the winners to work in residence with technical and curatorial experts at the British Library. They will receive extensive support including hardware, software, rights clearance, and access to content that might not be readily accessible through current services. 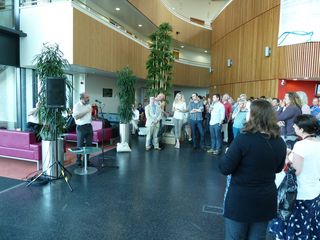 Adam Farquhar, Head of Digital Scholarship announcing the winners of the first British Library Labs Competition, 2013 at the Inaugural Digital Heritage 2013: Interfaces with the Past Conference at the University of York, 6th of July, 2013

The project is guided by an Advisory Board including leaders in digital scholarship and creative industries in the UK: Claire Warwick at University College London, Andrew Prescott at Kings College London, Tim Hitchcock at University of Hertfordshire, David deRoure at Oxford, Bill Thompson from the BBC and Katy Beale, Director of Caper.

So now on to the winners...

The first annual competition winners, chosen from over twenty high quality submissions, are:

Sample Generator for Digitised Texts by Pieter Francois. Pieter will work to develop a software tool that will extract samples from digitised text – custom corpora – from a larger collection. He will explore methodological issues around data-focused hypothesis formation and testing in the context of large corpora. He’ll apply tools and methods to his area of research interest – 19th century travel. We think that they have potential for wide reuse. This project brings together his interests in data, statistics, and nineteenth century travel.

Mixing the Library: The Disc Jockey and the Digital Collection, by Dan Norton PhD researcher at the University of Dundee and Artist in Residence at the Hangar Centre for Art and Research in Barcelona

Mixing the Library: The Disc Jockey and the Digital Collection, by Dan Norton applies the model of information interaction, developed as part of his doctoral study, to develop an innovative prototype for working with multiple content sources and data-representations from British Library digital collections.

Unfortunately only 2 entries could be chosen to win so we would like to publicly commend and recognise those that made it to the short list but didn't, they are:

We would also like to make a special mention to Emanuil Tolev who has only recently graduated from his undergraduate studies and is now working as a researcher and software developer at a small company called Cottage Labs. He not only made the short list with his entry ‘Seriousnews’, a service which attempts to enable the investigation of scholarly sources in news articles which do not cite their sources, but he also submitted another two high quality submissions which scored very well.

We will hold an event in London to highlight the winners’ work and other Labs activities on 11th of November 2013 as well as announce our next competition.