Digital Conversations Event on The Scholarly Use of Web Archives

The Digital Research & Curator Team had organised a number of thought-provoking events throughout 2011 and 2012. However, these were only open to British Library staff and we thought that it was now time to share Digital Conversations with a wider audience. 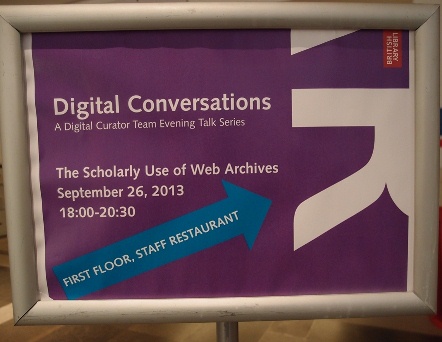 Our theme for the first public Digital Conversations event: The Scholarly Use of Web Archives, had been suggested by our colleagues in the British Library’s Web Archiving Team and we were delighted to invite international experts to speak: Richard Rogers, Professor of New Media and Culture and Chair of Media Studies at the University of Amsterdam and Niels Brügger, Director and an Associate Professor of Internet Studies at the Centre for Internet Studies, Aarhus University, Denmark.

They were joined by Helen Hockx-Yu, Head of Web archiving at the British Library; David Berry, Reader in Digital Media in the School of Media, Film and Music at the University of Sussex  and Michel Hockx, Professor of Chinese at SOAS, University of London.

David Gauntlett, Professor of Media and Communications at the University of Westminster, moderated the event and effectively kept the schedule running on time. 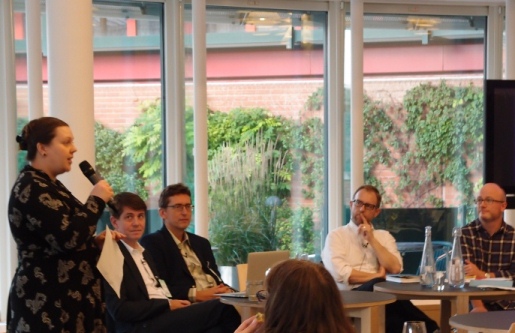 Many interesting questions were raised by both the speakers and the audience; these included:

Many of the issues raised are far too complex and profound to be solved by a single conversation! However, we hope to have raised awareness of of the importance of web archives and started people thinking about how they may engage with them in their research.

There was active tweeting throughout the event using the #BLdigital hashtag and you can see these tweets on Storify.

Slides from some of the presentations can be viewed on SlideShare and you can watch the "Google and the Politics of Tabs" video shown by Richard Rogers on YouTube.

The next Digital Conversations event will be on Interactive Narratives on 4 November 2013; watch this blog for more information, including how to book a place, coming soon. 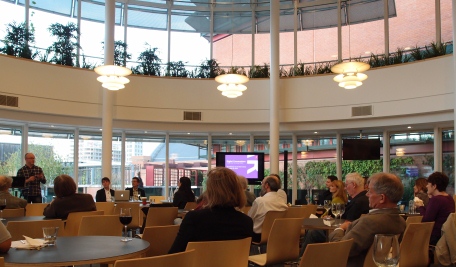 Attendees enjoying the event over a glass of wine

Posted by Stella Wisdom at 7:16 PM