Over recent months I’ve been working on-and-off with a collection of metadata relating to articles published since 1995 in journals the library have categorised under the ‘History’ subject heading. 382497 rows of data (under CC0) about publication habits in the Historical profession, which lend themselves to some interesting analysis and visualisation.

To recap from previous posts on this blog and on another, I started this work by extracting words which frequently occurred within journal article titles. Having filtered out words whose meaning was fuzzy (‘new’, ‘early’, ‘late’, ‘age’) or whose presence was not helpful (‘David’), I was left with this list of topwords (I’ve avoided ‘keywords’, I just don’t like the word at the moment):

Before we get to the fun bit, there are a number of problems with the data that need pointing out:

Despite all of this, I’d like you to play a game of guess the journal from a network graph; a network graph representing data for the 30 highest ranking English language History journals in terms of article volume published between 1995 and 2013. On one hand you doing this will help me validate that my data – and this particular way I’ve chose to represent it (a force-directed ‘Force Atlas’ graph generated using Gephi) – has some value; Adam Crymble has a nice example of how this can be useful. On the other it should be a bit of fun.

So, onto that long promised fun bit. Knowing the following:

can you guess which number the following journal is represented by? (Or is this whole thing meaningless?) 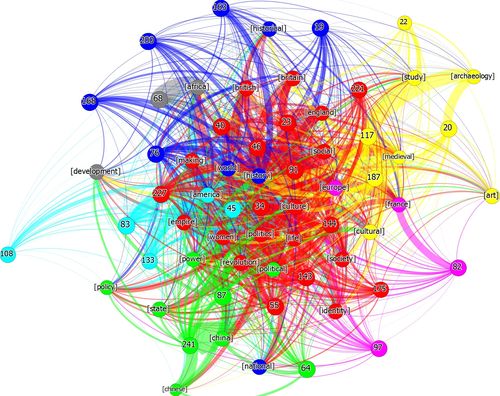 Bimodal Force Atlas graph for History Journal Articles published 1995-2013. For more detail (and with apologies for the fuzzy compression above, you'll probably need it!), download the PNG or SVG version.

To start of you off, I’ll gift you that American Historical Review is number 34 – right at the heart of the network, not surprising given the volume of output. I’ll also give you a little derived data to help you make up your mind.

Answers in the comments please!

Your Dropbox csv file link does not workk properly, it seems.

Apologies. Should be fixed now.

Of his other guesses, the correct journals are:
82 is French Studies
241 is China Quarterly
23 is Albion
76 is International History Review

So, four more to get. Keep guessing!

Adam, thanks for guessing!

So, going through your guesses in turn:

22 Antiquity
Incorrect. 22 is Journal of Archaeological Science. Antiquity is 20 (see comment above).

91 Journal of Social History
Incorrect. 91 is one of the four titles yet to be guessed correctly...

So unlucky, but close. I've created a new blob of derived data based on all the guess so far: https://www.dropbox.com/s/luekf22vynjyuez/2013-11-06_Guess_the_journal_data.csv. So only four left to guess!