Following the completion of my PhD at the University of Dundee, I spent a period of time as Artist in Resident at Hangar Centre for Art and Research, Barcelona. There, I collaborated closely with the Department of Library Science and Documentation at the University of Barcelona to explore the potential value of the DJ’s model of information interaction in the field of Library Science and particularly with the use of digital collections.

It was with this background, I decided to enter the British Library Labs 2013 competition after participating in an online meeting: 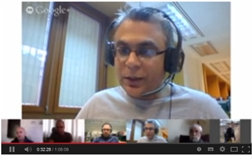 My project idea was to apply the DJ's way of working with music, their model of information interaction (developed as part of my doctoral study entitled: "Mixing the Library: Information Interaction and the DJ”), in a prototype for working with multiple data-representations from the British Library digital collections. This practice-led investigation would be used to describe the interface requirements for collecting, enriching, mixing/linking, and visualizing information from large digital libraries.

The prototype would be built on previous work and would attempt to combine the two essential interface features of the DJ's model: continual visual presence of the collection as a writeable menu system; and a "mixing screen" that allows two (or more) data fragments from the collection to be presented, combined, and linked. These simple interface requirements would be used to build sequences through an archive by linking articles, and later be evaluated and extended as a tool for developing semantically rich data, to be incorporated into the RCUK SerenA project (serena.ac.uk) of which my doctoral study was a part.

The tool would hopefully  operate as a powerful scholarly interface for learning and development in digital collections, for sharing annotated semantically rich data, and for communicative exchange of findings. A screencast demonstrating the interface is available here: 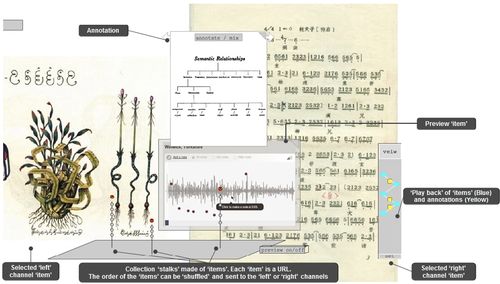 I think it would be important to give some background and explanation as to why I think the DJ’s model of Information Interaction is valuable for working with multiple data types (images, video, sound, text etc.)

'The significance of the 'information explosion' may lie not in an explosion of quantity per se, but in an incalculably greater combinatorial explosion of unnoticed and unintended logical connections.' (Swanson 1996). 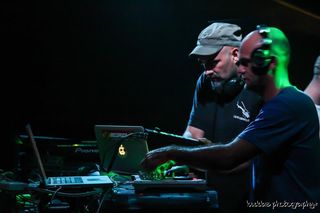 Creativity in the DJ’s system apparently simple. It is entirely reliant upon bringing together sequences of material and exploring the possible combinations. It can do this simply as a sequence of tracks one after another, or in my complicated way which involve over layering, sampling, and mashups.

The DJ’s creativity enters the system in two fundamental information behaviours: selecting and mixing. With these two behaviours alone personal expression and intent can enter an activity that always reuses stored content.

Selecting is the principle of creative behaviour. It reduces information volume, builds useful groups of related material, and in the live event is done responsively to feedback and personal idea.

Mixing is the second creative information behaviour. It combines the material and explores the connection between articles. Mixing formulates previously unnoticed connections from within the archive.

A Model of Learning

Learning is intrinsic to the DJ’s model of interaction. Learning and memory develop through retrieval, organisation, classification, and addition of metadata. The association of human memory to the digital image of the collection (digital memory), creates a system in which the DJ can work in a creative flow with information, moving between idea and information.

The model incorporates retrieval and learning, with creative development and a publication workflow. Newly created texts are directly tested in a field of listeners, and may also be published and released as informational resources. The model is described in the image below. 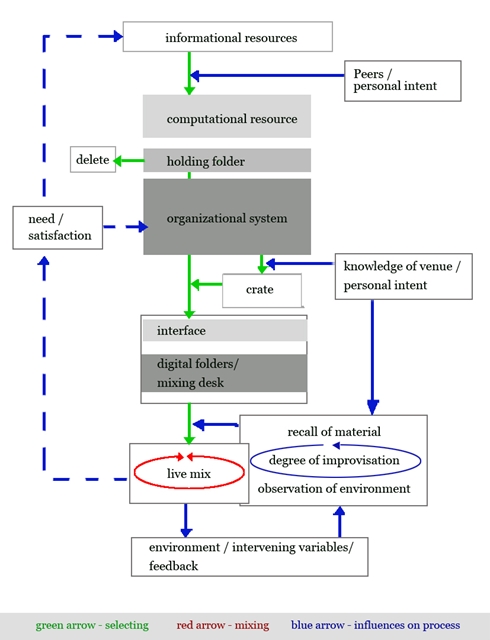 The next few blogposts will discuss my experiences of using the British Library’s collections, working with Labs to develop the first functioning iteration of the interface and the future developments of the work.