On January 17th curators in the Digital Research team hosted the library’s first Digital Research Doctoral Open Day. The event was aimed at doctoral students new to digital research from any field, and was a chance for what turned out to be a remarkably diverse range of students to explore digital research methods, to learn about interesting digital research projects, and to consider how they might applied digital research techniques to the British Library’s digital collections. The event included a introductory talk from Adam Farquhar, Head of Digital Scholarship at the British Library, and a closing address from Andrew Prescott, Professor of the Digital Humanities at King's College London, well as offering a chance for the students to meet curators from across the library.

Interaction formed a major part of the day, the centrepiece of which was a task where the students develop a series of prototype digital research projects. Given the success of the task, I thought it worth sharing what we did, how we did it, and the tools we used.

The students were broken down into groups of five or six and each group was given a flipchart, some pens, and some cards: two 'Tool Cards' and two 'Source Cards'. Each 'Tool Card' represents a hypothetical tool for digital research and each 'Source Card' a hypothetical digital collection, though in both cases they resemble real things. Included on each card is a description of the sorts of properties these tools and collections have, some with potential use cases or pitfalls included. The cards are available for use and re-use under a CC BY-SA licence: 2014-01-29_BL_DR_Open-Day_task_cards.docx.

What we asked each group to do was to look at the cards, to come up with a potential research project that might be possible by combining them, and to prepare a two-minute pitch on their prototype digital research project. The students had a forty minute session (plus the hour of lunch that followed) to complete this preparation, before reporting back in turn - with Q&A after each mini-presentation and a discussion afterwards - during an hour-long session. 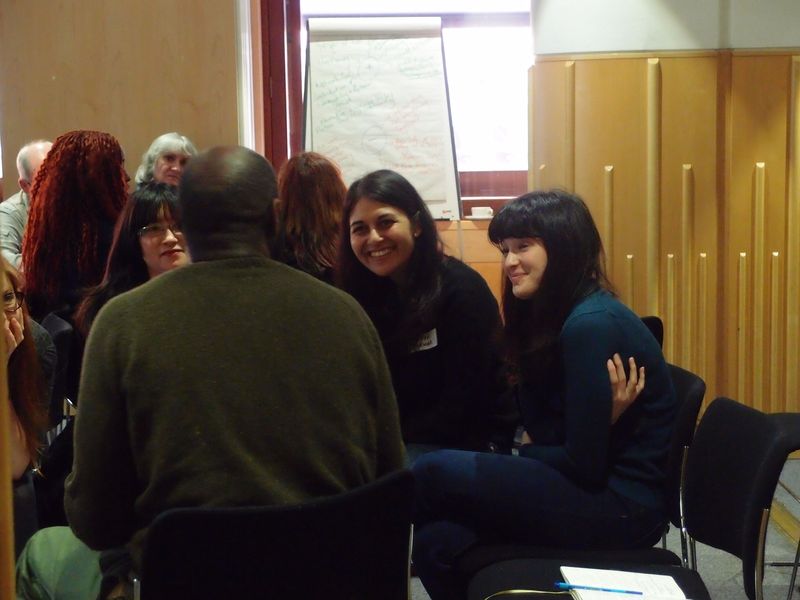 Our main recommendation to the students was that they kept things high level and avoided getting too bogged down in detail. What we didn't want was their discussion to be dominated by practical limitations (such as the messiness of data, limitations of digitization, lack of compute or storage, need for training), because we wanted them to be idealistic, open minded and aspirational. That said, we did ask the students to briefly identify potential pitfalls in the transition from hypothetical project to real research.

The students had to work quickly, but we did ask they start with a little basic project management best practice: find out who they were, what skills they had, and who was confident about doing what. Given the range of research backgrounds we were dealing with this was particularly important to us.

Finally given that the students were at a 'Digital Research' event, we addressed why we were asking them to do all this using flipcharts, some pens and some cards, rather than computers, some data, and some of the digital research tools. In essence this comes back to the desire for them not to get bogged down in practicalities. The exercise was about ideas as opposed to doing, and in this regard I’m very much inspired by the great social historian Emmanuel Le Roy Ladurie who wrote in 1973 that for researchers:

What counts is not the machine but the problem. The machine is only interesting insofar as it allows one to tackle new questions, content and especially scale

So we urged them to proceed with novelty of questions, content and scale in mind, as opposed to worrying too much about the technology that made this novelty possible (I should add that digital transformations and their impact on research was a broader theme of the day). 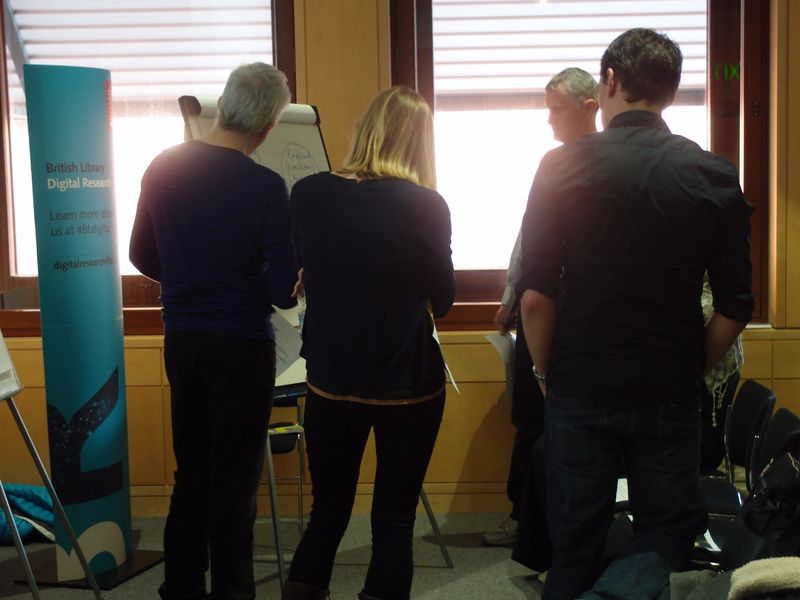 Though some groups took a little time (and a little help) to grasp the purpose of the task, all were soon working together, jotting down ideas, sketching out plans. The projects they presented were also interesting and creative: examples of which range from using wedding photographs and fuzzy facial recognition software as a means of mapping kinship networks, to correlating sentiment analysis of social media responses to flooding with subsequent government investment in flood defences. In short, it proved a fascinating insight into the researchers and research patterns of tomorrow. (Ludi Price has written about this, and the day more generally, on her blog.)

On reflection there are of course a couple of things we might do differently next time.

The first revolves around basic organisation. Due to a lack of information and time the groups were divided by birth month. This resulted in each group having a wide range of skills and backgrounds. Whilst there was some value in this, we were perhaps a little lucky that no group failed to find enough in common to get going. So, in the interests of the students coming away with domain specific examples of digital research (crucial, in my opinion, for subject areas being able to engage with and critique digital research effectively), next time I might cluster the groups by interest - or by asking the students to choose a group based on a theme.

The second is about tools. Although we didn't assume any the students had any knowledge of digital research tools and methods, I perhaps over-estimated how meaningful phrases such as 'text mining', 'georeferencing', and 'network analysis' were to everyone. In the open discussion, questions about practicalities spilled over into the realm of the basic functionality of digital research tools used in, say, text mining: something some hands-on experience - however brief - might well have clarified. I suspect then that there could be value (in spite of my invocation of Ladurie...) in giving each group a short task which demonstrates the application of a hypothetical tool they are being asked to consider in a research context.

If you've organised a similar prototyping task for students new to digital research we'd love to here from you! Email digitalresearch@bl.uk or tweet using #bldigital to get in touch.

(There are no known copyright restrictions on photographs in this post)

[In this guest post, Sara Gould describes EThOS and the forthcoming webinar “Using doctoral theses in your research: a guide to EThOS”]

The British Library will be holding a webinar in a few weeks to tell researchers about EThOS – the UK’s E-Theses Online Service. In a nutshell EThOS is simply a database that offers a single point of access to the PhD theses that have been awarded by the UK’s universities: 330,000 records leading to 120,000 full-text downloadable theses, free from anywhere in the world. And the other 200,000-odd titles can mostly be ordered for scanning on demand.

That’s an enormous bucket of virtually unique research content that holds incredibly valuable information not accessible through any other route. For example, in describing the 1 million images we’ve just released on Flickr we included an image from an 1837 book on Ancient Egyptian manners. A cursory search In EThOS reveals several theses on related topics, such as this one awarded by the University of Nottingham which examines customs and approaches to healing in Ancient Egypt.

There’s a huge amount of value for researchers buried in PhD theses. As well as the obvious reporting of research findings, doctoral theses often describe negative research outcomes as well as the positives – and that’s the type of thing that’s not always reported in peer-reviewed journal publications. A recent survey also showed that it’s not always the core research content that people find useful. Postgraduate researchers also use EThOS to find examples of well structure theses, see other PhDs their supervisor has supervised, find the best universities for particular research topics and make contact with other authors in their field. So it’s a useful source of information for people doing research but also for existing authors to make connections.

The EThOS webinar - “Using doctoral theses in your research: a guide to EThOS” - will take place on Thursday 13 February at 15:00 – 16:00 GMT. You can register for the webinar by completing this registration form.

Many of you in UK Higher Education – and perhaps beyond? – will know that the British Library has for some time been running a successful series of Doctoral Open Days , but this year – in addition to our usual offerings – we shall on January 17th be hosting our first Digital Research Doctoral Open Day.

Why this and why now? Well, in short, scholarship is responding to massive changes in the world around us. Not only has the distance between online and offline all but disintegrated – just think how archaic the once ubiquitous phrases ‘log-on’ and ‘cyberspace’ sound today – but this lifestyle shift has had massive repercussions for academic research. As Steven Jones eloquently puts it:

The emergence of the new digital humanities isn’t an isolated academic phenomenon. The institutional and disciplinary changes are part of a larger cultural shift, inside and outside the academy, a rapid cycle of emergence and convergence in technology and culture.

Just look at the British Library. Whilst we still collect, preserve and provide access to all manner of physical stuff, over the last two decades we have become a vast resource of digital objects. These data range from digitised text, sound, visual, and philatelic material, to born-digital collections of personal archives and web content: so data representing both our past and our present. Together these data are transforming research and setting the agenda for future research, with new tools and computational techniques used to wrangle, process, share and analyse  these data generating new discoveries and new understanding in the arts, humanities, and social sciences.

Today’s doctoral students are the future of research: and whether or not they choose to use data in their research (providing the data they need is available), they will all benefit from being equipped to understand and critique the affordances and challenges of the digital research. And hence our open day.

The British Library Digital Research Doctoral Open Day is aimed at first year PhD students or doctoral students who are new to digital research, lunch and refreshments are provided, and there are still places available. So if you are a doctoral student who wants to come along or a supervisor who thinks their PhD students could benefit from the event, the programme can be consulted and places can be booked via our What’s On page.

We look forward to seeing you or your students at the event!