Digital history and the death of quant

What do historians need to do good digital research?

Well, they need skills that help them get at data, wrangle data (Open Refine perhaps), organise data (in machine readable, human readable, platform agnostic ways), chop up data (perhaps a splash of Unix), get that data into a form that tools for geo-referencing, text mining, topic modelling, network analysis, and the like can handle, can make best use of. They might even need to learn a bit of programming (there are some great Python tutorials over at Programming Historian), or at least develop a sense of what is made possible with code so that collaborations with developers are fruitful. A little CSS can be used to make pretty, meaningful, informative visualisations. Being a social scholar who fully exploits the affordances of the network, who understands open licensing, can open new perspectives, new communities. And, of course, there is always room for bit of theory around all of this doing, drawing lessons from - say - corpus linguistics, the voluminous history of humanities computing (yes, folks were doing this stuff before Tim Berners-Lee invented the web!), or recent texts on the Digital Humanities (current recommendation The Emergence of the Digital Humanities by Steven Jones.)

So historians need a lot, or - given that time is a premium - a sense of purpose when approaching the task, a good eye for what bits are most relevant to them and to their research, and means of filtering, of sharing the load (Twitter is a good place to start this.)

But one thing that is often forgotten in all this is the ability to count, to do statistics, to use quantitative methods. Now I say this with a big caveat. Some of my favourite digital history, the St Paul's Cross Project or Dirty Books come to mind, isn't about the stats. Nevertheless, it is curious that at a time when both the use of and the breadth of humanities data is growing, quantitative skills (in my anglophonic experience at least, do correct me if this doesn't correlate elsewhere) seem to no longer form a core component of our undergraduate history programmes. There are good reasons for this: the decline of economic history, the triumph of cultural history, the sense that numbers - and the grand narrative social history numbers are often associated with - fail to adequately explain past phenomena, that they flatten past experience. As historians don't teach what we don't do, we are - for the most part - research led teachers, and with cultural history central to our mission for over two decades then numbers, statistics, and quantitative methods appear to no longer be core skills we are passing on.

One way of thinking about this is to go to our textbooks, the introductory texts we ask undergraduate historians to read when trying to understand what it is to be a historian. And when we do this through the lens of digital history we notice something curious.

In the index to the 1st and to the 2nd editions (1984 and 1991) each include three entries for 'computers'. In both a whole chapter is dedicated to 'History by Numbers', the growth of which prior to the 1980s Tosh attributes to two factors: a desire to explain more than history of great men (which turned historians to different sources, many of which needed counting) and the affordability from the 1960s of computers. As Tosh writes 'both the kind of data it [the computer] could handle and the operations it could carry out were rapidly diversified'. Here then the computer is a labour saving device yoked to numerical work and statistics, of which Tosh notes their importance with a note of caution:

Statistics may serve to reveal or clarify a particular tendency; but how we interpret that tendency - the significance we attach to it and the causes we adduce for it - is a matter for seasoned historical judgement, in which the historian trained exclusively in quantitative methods would be woefully deficient [197, 1st edition]

For certain flavours of digital history to thrive, such ideas and arguments could do with being a standard part of training for new historians. Instead, by the 5th edition of Tosh's work (published in 2010, over a decade after the 4th) changes within the profession are reflected in such a way that global, comparative, cultural, and post-colonial history all feature prominently, but quantitative history is reduced to a mere two and a half pages. So just as digital history was kicking in, a year before the Digital Humanities invited all on the fringes into its 'Big Tent', a key textbook in the field of History relegated quantitative history and the skills associated with it to marginal status and removed from the index all references to 'computers'.

This hasn't passed unnoticed. In the first volume of History in Practice, published in 2000, Ludmilla Jordanova argued that a fashion for certain approaches should be weighed against an overall sense of the skills and tools historians should have when developing undergraduate curricula. 'Economic history', she writes, ' is particularly vulnerable in this respect' (202), continuing:

Economic history (like some other fields) is a fundamental part of the discipline, of which every student ought to have some understanding […] Faced with the choice between courses on the history of sport or the history of animals and those on economic, political, social or intellectual history, I would hope students would be able to see that the latter are likely to be of more general use than the former [203].

What Jordanova is suggesting is the importance of understanding how to negotiate the relationship between big and small history, macro and micro, 'scientific' and humanistic method to the historian's craft. And in the second volume of her work, published in 2006, during an extended commentary on the digital age, she extends this discussion of core skills and tools further; to how historians could, should, and might respond to novelty (ergo the explosion of the web and the affordances thereof) in light of the professional attributes they wish to preserve.

Alongside many other arguments, some more prominent than others, both editions of History in Practice identify and lament a decline of quantitative skills in the training offered to historians. To do aspects of digital history well, to take full advantage of those sources, be they ledgers, ephemera, books, newspapers, sound recordings, or videos, now available as data, as stuff that can be manipulated, counted, prodded in novel and unexpected ways by machines working at the behest of humans, the profession needs quantitative skills - both knowledge of how to do quantitative research well and the deep history of its relationship to qualitative research (pages 49-55 of History in Practice 1st edition contain a useful example of how these approaches can compliment one another). As someone who was trained during the apotheosis of cultural history and the associated agonising over post-structuralist and post-modernist theory, I was not taught to count as a historian. And I wish I had been, for when first attempting to do good digital research I would have benefited from possessing this core skill, a skill the profession still has the capacity to teach.

Posted by Digital Research Team at 10:59 AM

The British Library's Digital Scholarship Training programme aims to provide library colleagues with the skills and knowledge to best exploit the digital transformations taking place around us, both in and outside the research community.

To close the third semester of this programme we in Digital Research decided to embark on something of an experiment: to transform our one-day 'What is Digital Scholarship?' course (one of the sixteen one-day courses we offer) into a staff-only unconference on Digital Scholarship and Working Innovatively with Digital Collections.

For those out of the unconference loop, an 'Unconference' brings together delegates under a particular theme but the schedule for the day is entirely created by the attendees. Anyone can propose a session beforehand or on the morning of the event. The day begins with all who have proposed sessions having an opportunity to briefly pitch their ideas. A vote is then cast (at our event three votes each cast as ticks/crosses/marks placed next to a session name on a flip-chart, so relatively anonymous!) and those with the highest votes form the final schedule for the day (as we couldn't guarantee that there would be room for every proposed session, we asked colleagues not to over prepare!) Pitchers then act as facilitators for their sessions. Not all participants are required to propose a session - most, in fact, come along for the ride! 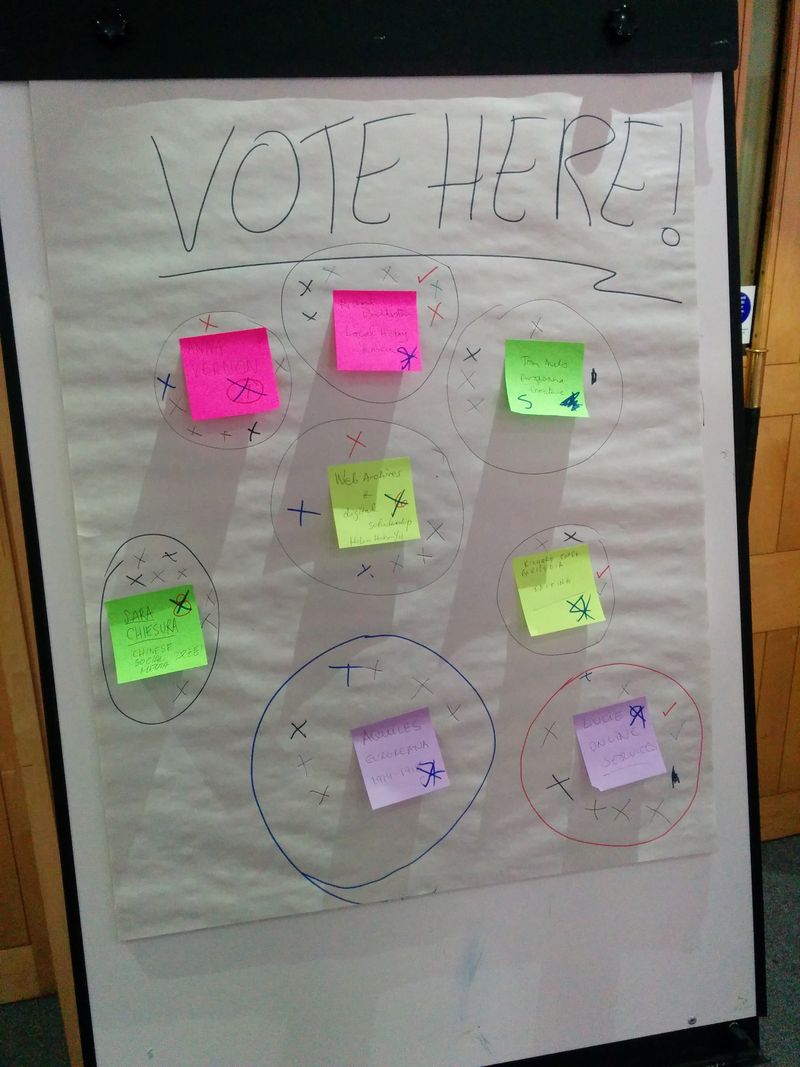 As digital scholarship and innovation is happening across the British Library, we wanted to give colleagues the opportunity to share their interests and skills with others. We suggested that sessions could be on anything related to digital scholarship and innovation with digital cultural heritage collections in the broadest sense, and to avoid the event amounting to little more than a series of talks we asked colleagues to fit their proposal into one of more of the following categories:

On the day, every proposed session passed a threshold of interest and we hosted ten sessions across three rooms. These ranged from a discussion of open licensing, an introduction to editing Wikipedia, a talk about Chinese social media (who knew our one million Flickr images are blocked by the Great Firewall of China?), and a workshop on creative reuses of Europeana content, to an update on our web archiving and associated access activities, an informal survey on how we might engage with local history communities, and a lively session around what access to our digital content should and could look like in an ideal world. 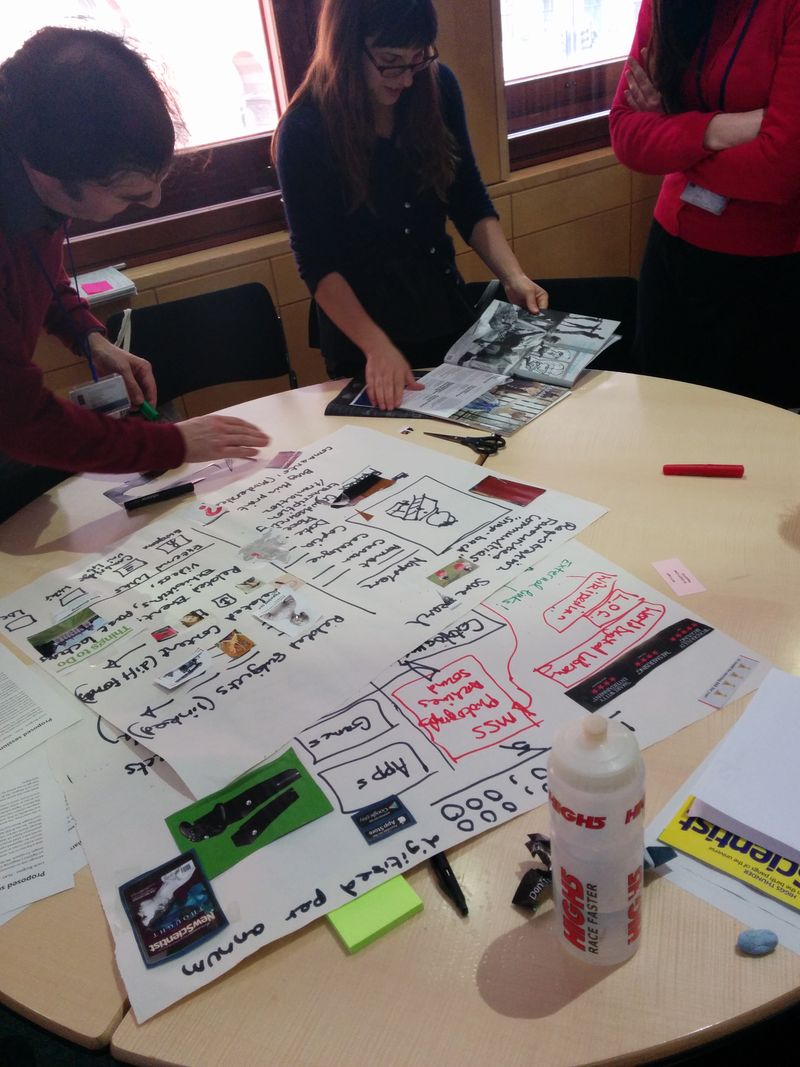 As should now be clear, having no schedule did not equate to little organisation, to anarchy. Rather, a carefully constructed framework needed to be built around the day to ensure everything ran smoothly. And as it turned out, the event was as creative, provocative, and fun as we had hoped, as well as being enormously productive. In particular, what emerged was clear feedback regarding how the Digital Research team can develop our future training provision in line with staff needs, including not only a sense that colleagues valued a varied and creative programme but also around how best to introduce colleagues to digital scholarship. As so the unconference will return, but likely as an external event embedded within our otherwise staff-only programme. A few eager twitterers have expressed an interest in this already, but if you'd like to collaborate with us on an unconference around 'Digital Scholarship and Working Innovatively with Digital Collections' (working title) sometime later in 2014 then get in touch via email (digitalresearch@bl.uk) or Twitter (@j_w_baker or @ndalyrose). We'd love to hear from you.