The Emergence of the Digital Humanities

Today Reviews in History published my review of The Emergence of the Digital Humanities by Steven E. Jones, with a generous response from the author himself.

The premise of the book is rather simple: that the key contexts for the emergence of Digital Humanties from Humanities Computing were changes in network technology. As Jones writes:

The emergence of the new digital humanities isn't an isolated academic phenomenon. The institutional and disciplinary changes are part of a larger cultural shift, a rapid cycle of emergence and convergence in technology and culture (p. 31).

Take 'technology' out of that sentence and the current vogue for DH seems no more or less a product of its time than twentieth century turns by humanists towards gender, race, or global studies. And as we know, such self-reflection and self-awareness can only produce better research.

Now, however swift a publication is turned around by its publisher (and this one was super swift) the mind continues to move and thoughts on matters change. In this particular case, on reflection, one sentence of mine stands out:

Jones, like the majority of the prominent North American DH scholars that are introduced in this volume, from Matthew Kirschenbaum, Franco Moretti and Amanda French to Kathleen Fitzpatrick, Matthew Jockers and Alan Liu, has a literary and new media studies background.

Following fertile discussions at DH2014 earlier this month (see 'The British Library at Digital Humanities 2014') I'd like to soften this: Jones is like many, not the majority of, North American DH scholars The Emergence of the Digital Humanities introduces in having a blend of literary and new media studies in his background. And this is of course, I should stress, no bad thing: just something worth pointing out when the audience you have written for was historians.

With that caveat out of the way, go read the review!

My thanks to Danny Millum and all at Reviews in History for their editorial input, and for the Insitute of Historical Research for continuing to support such a valuable publication.

On Friday, 28 November 2014 the Bibliothèque nationale de France will be hosting the final conference of the SUCCEED project and IMPACT centre of competence:  'Succeed in Digitisation, spreading excellence'.

SUCCEED is an EU funded project that promotes the take-up and validation of tools and resources for mass digitisation, with a focus on textual content. The conference will mark the end of this project and the schedule will focus on the main outcomes:

The 'Succeed in Digitisation, spreading excellence' conference will provide a great opportunity to network and learn more about the latest developments in digitisation. If you wish to participate, please register here.

The British Library at Digital Humanities 2014

Two contributions proposed by the British Library made it through the rigorous peer review process and into the conference proper. Adam and I presented a poster on our vision for a digital infrastructure that would enable scaleable and innovative research with our digital collections. Very much intended as a conversation starter, we were heartened by the positive and constructive feedback we received. Entitled 'Interoperable Infrastructures for Digital Research: A proposed pathway for enabling transformation' this poster is available for use and reuse via Figshare.

Along with librarians from Stanford, Columbia, Virginia, and NUI Maynooth I ran a workshop on the first day of the conference entitled 'Methods for Empowering Library Staff Through Digital Humanities Skills'. This workshop provided an opportunity not only for organisations with similar library facing digital scholarship training programmes to share ideas, but also for librarians considering putting together comparable programmes to develop and deliver a mock pitch in a friendly and constructive environment. My slides on our Digital Scholarship Training Programme are available on Slideshare.

The fact that so many librarians were at this session, and DH2014 more broadly, speaks to range and breadth of attendees at the conference. Indeed it was pleasing to find DH as studying poetry and literature with digital tools to be only one component of the work going on under the auspices of DH. Stand out papers we attended included Ian Milligan 'Clustering Search to Navigate A Case Study of the Canadian World Wide Web as a Historical Resource', Kari Kraus 'Signal & Noise: ENF as part of the sound archivist's toolkit' (which discusse using the Electric Network Frequency data embedded in audio recordings to date, timestamp, and locate them), Stéfan Sinclair and Geoffrey Rockwell 'Towards an Archaeology of Text Analysis Tools', and stellar keynotes from Bethany Nowviskie on 'digital humanities in the anthropocene' and Bruno Latour on 'Rematerialising Humanities Thanks to Digital Traces'. All my notes from these sessions are available on GitHub under CC BY licenses .

It was also pleasing to hear our work over recent months spoken about by others. Julianne Nyhan made mention of our release of 1 million images onto Flick Commons in her talk 'Facial recognition in DH: new directions?' Elsewhere, Kim Martin and Anabel Quan-Haase analysed the Mechanical Curator alongside other serendipitous machines such as Serendip-o-matic in their talk 'Designing the next big thing: Randomness versus serendipity in DH tools'.

A running theme of DH2014 was DH beyond the Anglophonic world (see for example a session on the GO::DH Minimal Computing Group) and Digital Humanities 2015 will take the theme 'Global Digital Humanities'. And appropriately for a conference that has hitherto taken place in only Europe or North America, hosting responsibilities will pass to the University of Western Sydney's Digital Humanities Research Group. We hope to be there in some form, if not in person then at least virtually.

Posted by Digital Research Team at 10:41 AM

Since the project began in early June we have had an interesting time coming to terms with the typical workflow of a researcher from the arts and humanities.  One of the key tasks for this goal was conducting a focus group where we learnt a variety of different things, for instance, considering research conventions within the field, it was surprising to discover that researchers are willing to leverage modern computing tools such as text analysis.  During the focus group researchers expressed views and ideas which had never occurred to us, such as, “each instance of a book is a different object, it is unique because one specific copy is particular,” and “the person who composes the content can be different from the person who actually writes it.”  Having the researcher’s perspective conveyed to us in such a way was invaluable.  It was also useful to learn how they would improve existing search systems, “I would like intelligent suggestions” and another felt “feedback on which collection has been searched would be particularly useful.”  Overall the focus group was an essential learning exercise for getting this project off the ground.

We have also spent some time interrogating the British Library’s data and gained an appreciation for the variety, volume, velocity and veracity of its structure.  This presents a challenge which is interesting because it is not possible to resolve using familiar database software systems.  The data we have begun working with is quite diverse, it was created during the digitisation of approximately 40,000 titles (equates to approximately 65,000 volumes) which until recently been challenging for researchers and the public to access.  Now, all of the metadata, data and scans within the collection are dedicated into the public domain for unrestricted use.

The team have taken the opportunity to consult with key stakeholders and leading academics of the field.  All of this has set us up very nicely to begin development work.  In the coming weeks, we hope to build a powerful and intuitive service which will enable arts and humanities researchers to better interact with the British Library’s digitised collection of public domain books, thereby enabling them to access the data in a more meaningful way.

Posted by Digital Research Team at 11:56 AM

The Europeana Sounds project was launched on 1 February 2014. This three-year project, co-funded by the European Commission, will give online access to a critical mass of audiovisual digital-objects by January 2017. Over 540,000 high quality sound recordings will be available via Europeana, from classical and folk music, to environmental sounds from the natural world as well as oral memories. The project, coordinated by the British Library, is a partnership among 24 national libraries, sound institutions, research centres, and universities from 12 European countries.

The sounds selected for this project embrace the breadth of Europe’s cultural heritage : classical music and contemporary performances with timeless and universal appeal ; traditional and folk music and storytelling ; sound effects, environmental sounds and noises from the natural world; languages, accents and dialects and oral recollections, all with a particular resonance in different regions. Together these collections reflect the diverse cultures, histories, languages and creativity of the peoples of Europe over the past 130 years. 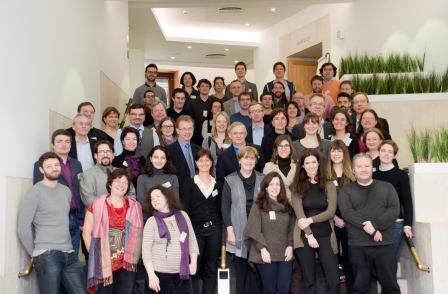 Since our lively Kick-Off meeting in mid-February at the British Library Conference Centre, we’ve published a number of the first technical deliverables and milestones.  In April, our aggregation team issued the initial content selection policy, marking the first steps towards the project’s ambitious aggregation targets. A revised aggregation infrastructure design was also released at the end of May. The metadata enrichment team circulated a survey to data providers, asking about the information needs that might be met through enrichment via crowdsourcing. A workshop on lowering barriers to access through tackling IP issues took place on 12 June in Copenhagen, addressing moral and ethical rights, out-of-commerce works, domain-constrained works and rights clearing policies. Our technical teams are focusing in on the user experience, a topic that was central to the discussions at a Co-Design Workshop held at the beginning of June to explore the current work on channels and interactivity.

After much hard work by the dissemination team, our new project website launched on 2 June. Please visit www.europeanasounds.eu to find out more about us and make sure to share the link with your networks via Facebook, Twitter, LinkedIn, Yammer etc. The dissemination team is always pleased to welcome entertaining and engaging blog posts for the website, so please send us your suggestions!