The Art of Data

Last month the Digital Research team organized another succesful Digital Conversations event. The evening, chaired by Anthony Lilley, brought together artists, researchers and art critics to reflect on projects and ideas around the use of digital data in contemporary artistic expression. Ernest Edmonds started the discussion by defining data as something that is constantly moving around and how this movement is, by its turn, constantly transforming data. Take for example communication. When we communicate our ideas and conceptions of the world, we are producing some sort of data that is transmitted from us to be perceived and given a meaning by others. This interactive process implies that data is transformed over time as different people can interpret the same data in different ways. Art, conceived as a mode of expression, follows the same logic: a single work can trigger different interpretations even by the same person: when we see a work of art for the first time we have a reaction that might change when are exposed to it on a second occasion. What digital data offers to artists is the possibility to explore new ways of representing the world, highlighting how data is constantly changing our perceptions. Digital data, according to Edmonds, is the ‘new canvas’ that artists use to make us aware of the transformation of data over time. 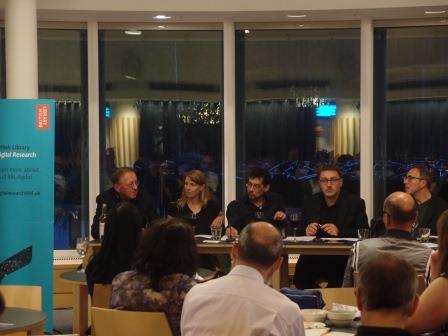 Michael Takeo Magruder continued the discussion by presenting some of his own artistic projects, arguing that the adoption of real time data by artists emphasizes the work of art as something in constant change, that is, something which is never really finished. Michael’s Data_Plex (economy) project was used as an example to illustrate this argument. The project was based on live data produced by the Dow Jones Industrial Average (DJI) index, represented in a simulated urban environment in the form of skyscrapers. The virtual buildings were erected or destroyed according to the fluctuations of the stock market. The audience was not only able to visualise a complex data structure in a more intelligible representation system but, more importantly, it became aware of how unstable the whole economic market in the USA was, as buildings were constantly changing in size, colour and shape to represent the variations of the market. During times of financial crisis, the audience could see the virtual buildings falling down as the stocks crashed, revealing in this way how some specific industries in the financial market are more prone to be affected by financial crises than others which, in the virtual urban space created by Michael, were kept intact. In a more metaphorical level, the artwork produced a criticism of capitalism as an unstable economic system that has the power to build up as well as to destroy what it has constructed.

Julia Freeman spoke of data as something that involves complexity as we all consume data in very different ways. Data is a broad and overused term and therefore we need to think of a ‘taxonomy of data’ in order to try to understand a little more about what makes data important to us. In the digital world there is a whole movement advocating for data to become open for anyone to use it but there is still little understanding on how this data will be used and how it can transform society. Talking about her own work, Julie explained about her interest in using live data – data that comes from biological systems – to explore new ways in which we can connect with our environment beyond sensorial perception. In one of her projects, The Lake, Julie tagged 16 fishes from different species in a particular lake containing a population of circa 3,000 other fishes. The idea of the project was to track the movements of the different schools by translating it into visual and acoustic data. The result was a complicated network of sounds and images that created different patterns by showing the levels of activity between fish species according to different times of the day. In a period of six weeks the project generated more than 5 million data points producing interesting colour patterns and sound compositions. 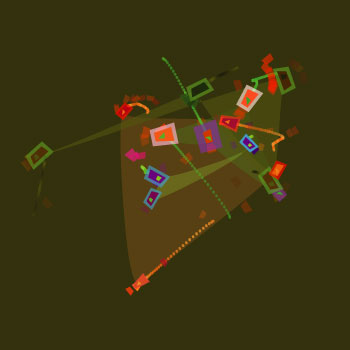 The Lake, by Julia Freeman ©

The last speaker of the evening, Kevin Walker, started his presentation by raising a controversial point in arguing that we are living in an age of digital data terror. Digital data is a buzzword and most of us who deal with it rarely question what are the sources that produce data, what are they meaning or even what sort of stories lay behind them. The role of the artist, in this context, is to interrogate technology and the data it produces. When experimenting with digital data, artists often arrive at unusual and surprising results, transforming information into experiences through design. Kevin illustrate his ideas by presenting some of the work done by his students at the Royal Academy of Arts, who are transforming data into perceptual experiences, normally through representing this data by sounds and graphic images. Students enrolled in the Information Experience Design programme run by the RCA are encouraged to integrate digital data from various sources into visual displays that translate the data into meaningful information for the audience in the same way described by the other speakers in the evening. These works emphasize digital data as a re-usable source that can be recycled and transformed into art. The question for the future, as Kevin points out, is how artists will move from working with digital to deal with quantum data. This question remains open so we should watch this space….

The audience participated eagerly in the discussions by posing interesting questions to the panel, much of them around the interactive nature of contemporary art in the digital environment. As explained in the presentations, art can add an essential meaning to real time data by turning it into visual and acoustic representations to the audience. As this data changes constantly, so does the work of art. This also suggests another interesting point that relates to the difficult task of preserving these works to future generations. Since transformation in real time permeates the aesthetic concept of digital data in contemporary artistic expression, it would probably be a good time for us to rethink our concept of preservation in a world of constant change.

You can watch the event here and below. Special thanks to Susan Ferreira for recording the video!