Last week the BL Digital Research team organised another Digital Conversations event to discuss research projects and trends on digital music analysis. The theme couldn’t be more timely as we just heard the news that the Library has been awarded a £9.5M grant from the Heritage Lottery Fund, as part of the BL’s Save Our Sounds campaign, to digitise and provide access to 500,000 rare, unique and at-risk sound recordings from our Sound Archive and other key audio collections in the UK.

Dr. Tillman Weyde kicked off the event by presenting some interesting findings from the Digital Music Lab, an AHRC funded project aimed at developing new software infrastructure to support musicologists to enquire into large collections of audio files, comparing and interpreting results applying innovative methodological approaches into musicology research. By analysing thousands of sounds recordings and metadata from the BL, CHARM and I Like Music datasets, researchers are now able to discover common patterns shared by specific musical genres, compare information on relationships between different musical styles and visualise changes in tonality, pitch and tempo as applied to a variety of genres as well as within a single piece recorded by various artists in different times and locations. One of the outcomes of this project was the development of an open Web interface that shows to the general public the various ways in which musical genres can be compared according to specific music parameters. 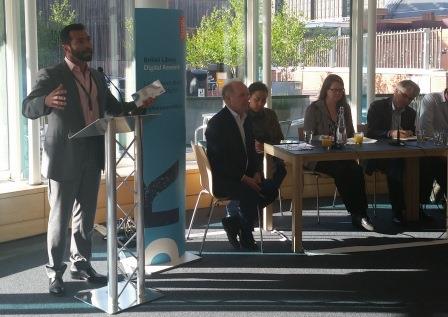 Prof. David Rowland and Dr. Simon Brown spoke about the Listening Experience Database project aimed at creating a database of transcribed personal accounts – mainly from manuscripts and printed sources – describing public responses to music. The LED database is a successful example on the importance of crowdsourcing activities for collecting and generating new data. So far the project has received 10,000 entries from the public and researchers involved in the project are interested in expanding the community of contributors so as to add more information to the database. If you are interested in contributing to this project on a more regular basis, or in learning more about the contribution process generally, please send an email to arts-listening-experience@open.ac.uk .

Prof. Mark Plumbley spoke about the ESRC funded project “Musical Audio Repurposing using Source Separation” lead by Queen Mary University, London.  The aim of the project is to develop a new approach to new methods for musical audio source separation, focussing on soloing and remixing of content to be generated during the project. Researchers involved in this project will also develop a software infrastructure to identify and extract different sounds from a single recording such, for example, the separation of each instrument in an orchestra recording or extraction of different sounds in environmental and wildlife audio files which will become available for researchers by the end of the project in 2017.

Our colleague, Dr. Sandra Tuppen, discussed the Big Data History of Music, another AHRC funded project involving the British Library in partnership with Royal Holloway aimed at bringing together the world’s biggest datasets on published sheet music, music manuscripts and classical concerts (in excess of 5 million records). Through statistical analysis, manipulation and visualisation of this data, the project will develop new methods for researching music history in innovative ways, associating information from various library catalogues to analyse long term patterns in music trends, music dissemination and popularity, development of music taste, performances, relationships and influences between composers since the 15th century. As Sandra remarked, humans create catalogues and catalogues (as well as humans) change over time, hence the importance for today’s researchers to understand how early music data has been collected and described over the last seven centuries. BL catalogue of printed music used for the Big Data History of Music is available for download and re-use under CC0 license at the British Library open data page.

The last speaker of the evening, Dr Erinma Ochu, discussed the Hookedonmusic project she has been involved which aims to collect information on what makes a tune catchy for the general public. The data used for the project is based on a crowdsourcing activity via a Web based game interface that presents some music extracts to the player who decides which tunes are mostly associated with memories of past experiences. So far 175,000 people have played the hookedonmusic game helping to build the research database of musical memory. Amongst many interesting and multifaceted results (did you know that the catchiest tune since the 1950s according to the information provided by the players is Wannabe by the Spice Girls?) Hookedonmusic is helping researchers to better understand how long term memory is trigged in Alzheimer’s patients through connection between life facts and the music to which they are associated so as to support the treatment of individuals suffering from memory loss. Have a go on the game and bring back the good moments you lived through music.

The event, chaired by Prof. Stephen Cotrell Head of the Music Department at City University London, raised interesting points for debate with the audience. The main message of the evening, at least from my perspective, was that the interdisciplinary work these projects are promoting by putting together musicologists, computer scientists, engineers, archivist and content curators are an essential step to demonstrate how important digital scholarship is for today’s researchers – no matter what discipline we work in!