My Digital Rights: Where next for our Magna Carta for the digital age?

This is a guest post by Sarah Shaw, the Magna Carta: My Digital Rights Project Manager:

What a week! For the last few days I’ve been knee deep in interviews, blogs and social media – all to promote our Magna Carta for the digital age. In the run up to the 800th anniversary of Magna Carta, we took the 522 clauses we’d received from school students around the world, and asked the public to vote for their favourites. On the 15 June 2015, we revealed these and have captured this to act as a snapshot of how people felt about the future of the Web, 800 years after Magna Carta was sealed at Runnymede. 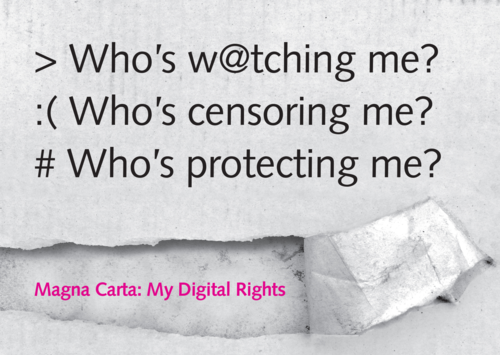 So what have we learnt? Well, 30,000 votes were cast and of those 72% saw people agreed with the clauses that had been submitted, indicating that the wider public agreed with many of the hopes presented by the young people who participated in the project. However, the main concern for young people was a need to feel safe and protected online, even if that resulted in curbing freedom of speech. The top 10 we captured on the 15 June shows a set of very different concerns for the wider public. Over half of the top 10 results call for freedom of speech online, free from government and corporate censorship; online safety doesn’t make the cut.

1. The Web we want will not let companies pay to control it, and not let governments restrict our right to information.

2. The Web we want will allow freedom of speech.

3. The Web we want will be free from government censors in all countries.

4. The Web we want will not allow any kind of government censorship.

5. The Web we want will be available for all those who wish to use it.

6. The Web we want will be free from censorship and mass surveillance.

7. The Web we want will allow equal access to knowledge, information and current news worldwide.

8. The Web we want will have freedom of speech.

9. The Web we want will not be censored by the government.

10. The Web we want will not sell our personal information and preference for money, and will make it clearer if the company/ Website intends to do so.

It was a mammoth task sorting through the 522 clauses to get them ready for the big vote. All of the clauses were uploaded verbatim. The only changes we made were to correct grammar, typos and to remove exact duplications only. That’s why we’ve ended up with two clauses in the top 10 that are quite similar – The Web we want will allow freedom of speech and The Web we want will have freedom of speech. The fact that both of these have ended up in the top 10 implies to me that this was a very hot topic for our voters at this point in time.

So what’s next, now that we have this top 10? Well this was never intended to be a definitive set of rules for the future of the Web. So instead this will be kept online for the world to see, a snapshot of the public’s hopes for the Web as captured on the 800th anniversary of Magna Carta. You can continue to vote for your favourite clauses, and we hope that the top 10 will continue to evolve to rise up and meet the changing face of the Web. Our resources will stay online, allowing teachers to continue the debate in schools, and our fantastic exhibition is open until 1 September 2015.

So keep voting, keep thinking about what you want for the future of the Web and keep debating your online rights and responsibilities. 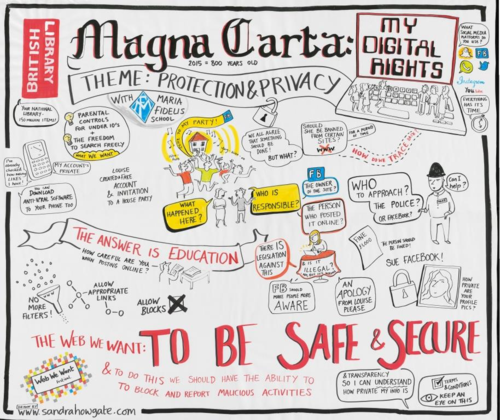 "Visual minutes" by Sandra Howgate, created for Magna Carta: My Digital Rights with the help of Year 9 girls from Maria Fidelis School at the Web We Want Festival, hosted by the Southbank Centre