British Library Labs Competition (2015) winner Dr Katrina Navickas showcased some of the results from her winning project at the ‘Following the Chartists around London’ event, held at the British Library on Monday 21st September.

Katrina’s project, the Political Meetings Mapper, has uncovered over 125 venues in London used for Chartist meetings in the 1840s. Katrina and the British Library Labs team took over 30 academics and members of the public on a tour of some of the sites investigated by Katrina that are still standing today.

Katrina updates us on the successful event:

We were pleased so many people turned up in costume, and everyone got to wear a traditional red, cream and green rosette! We began with some talks in the Foyle Centre for Conservation conference suite. Mahendra Mahey introduced the work of British Library Labs. Katrina then discussed the Political Meetings Mapper and gave a background to Chartism, the largest movement for democracy in 19th century Britain. Dr Matthew Sangster of the University of Birmingham explored his digital mapping project, Romantic London, which uses Richard Horwood’s 1799 map of London. Professor Ian Haywood of the University of Roehampton talked about the Chartist ‘monster meetings’ of the 1840s, particularly Kennington Common in 1848, and revealed some exciting new evidence about the Birmingham Bull Ring riots of 1839. 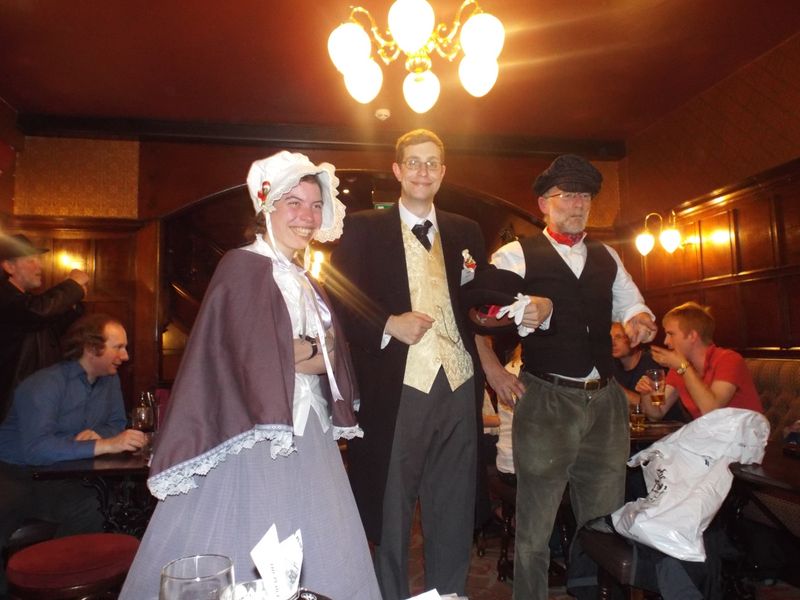 A re-enactment of one of the Chartist meetings

We then set off on our tour of London venues. The group braved the pouring rain, and succeeded in getting round all the points on the tour map, including the Prince of Wales Feathers pub on Warren Street, the King and Queen on Foley Street and the Crown and Two Chairmen on Dean Street. 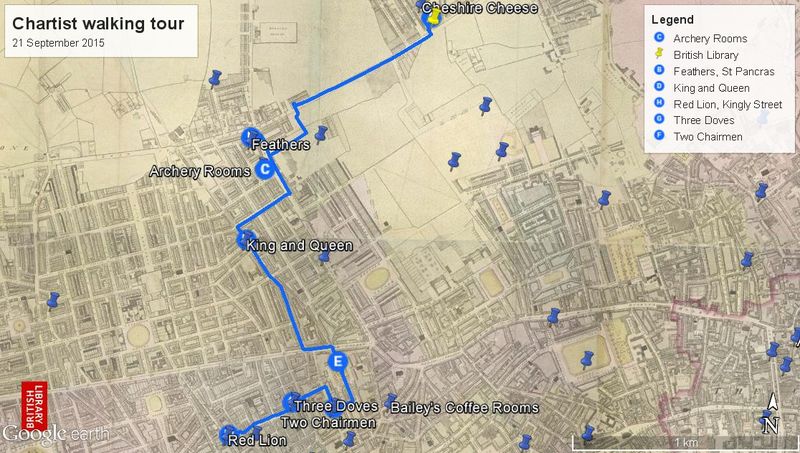 We ended up at the Red Lion on Kingly Street, Soho, which had been not only a Chartist and tailors’ trade union venue in the 1840s but also a meeting place of the radical London Corresponding Society in the 1790s. In the upstairs bar, volunteers in costume re-enacted one of the Chartist meetings using reports found in the digitised newspapers. The lively audience participated by passing resolutions in favour of universal suffrage (the vote for all men), and the People’s Charter. A video of the event will be available soon.

Find out more about Political Meetings Mapper on Katrina’s blog.

Posted by Digital Research Team at 9:11 AM