The Palimpsest team’s guest blog outlines their project for us:

“Edinburgh Castle is a noble rock — so are the Salisbury Craigs noble craigs — and Arthur's Seat a noble lion couchant, who, were he to leap down on Auld Reekie, would break her back-bone and bury her in the Cowgate.”

This quotation from John Wilson’s The Recreations of Christopher North (1854) illustrates one of the many ways in which Edinburgh has been used as a literary setting.  The first ever UNESCO City of Literature, it has a rich literary heritage which provides the backdrop for many novels and stories.  Thanks to Palimpsest, Edinburgh’s literary history can now be explored interactively via the LitLong web interface and mobile app. The LitLong tools link to more than 1,600 locations within Edinburgh mentioned in over 47,000 literary excerpts from around 550 books. The interfaces are aimed at scholarly and non-specialist audiences, including tourists exploring the streets of Edinburgh virtually or physically, locals who want to discover how authors described their city 150 years ago and literary scholars who are interested in place in the relations between place and literature.

The aim of the Palimpsest project was to be able to discover and make available for exploration a broad spectrum of books, including forgotten gems which are not part of the established canon of Edinburgh literature. The process involved establishing ways to define when a book qualifies as being Edinburgh-centric, exploring the literary use of place names and their utility as a marker of setting, and developing a document retrieval and ranking tool to sift potential candidates out of the pool of literature to which the Palimpsest team had access. The results of this retrieval and ranking process were then checked manually by literary curators.  This combination of automatic and manual processing meant that the team were able to identify a wide range of literary works set in Edinburgh, while at the same time ensuring that all documents visualised by the LitLong tools contain Edinburgh place name mentions. 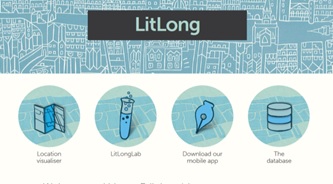 Palimpsest enables the exploration of Edinburgh’s rich literary history via the LitLong web interface, a mobile app & a search API

Within this process, a primary goal of Palimpsest was to conduct fine-grained geo-referencing to street, area, landmark and building names, as opposed to city-level geo-referencing which most prior work in that area had focussed on.  To achieve this, the team created an Edinburgh gazetteer by aggregating a number of existing geo-referenced data sets containing information on locations in Edinburgh including OS Locator, OpenStreetMap, and data from the Royal Commission of Ancient and Historic Monuments of Scotland.  Palimpsest adapted the existing Edinburgh Geoparser to geo-reference using the Edinburgh gazetteer containing both coordinate point references for locations and polygons for areas within Edinburgh.

The text processing work involved four distinct work packages: data preparation, document retrieval and ranking, creation of the Edinburgh gazetteer and text mining and geo-location of the final Palimpsest document collection. The aim was to take all electronically accessible literature and identify and geo-reference only the subset of literature set in Edinburgh.  As mentioned, the team used an assisted curation method, which employed the computer to identify possible candidates but then asked literary scholars to give their final say over which of the candidates were of real interest.  This approach included the creation and iterative refinement of a visual interface that could efficiently facilitate manual curation of the data.

The data behind the interfaces was created by text mining out-of-copyright literary works as well as a select number of contemporary books, and included work from Robert Louis Stevenson, Walter Scott, Muriel Spark and Irvine Welsh.  It is also accessible via an API. One hundred and eleven books and over 12,600 excerpts  – over 20% of the Palimpsest data  – were retrieved from the British Library’s Nineteenth Century Books collection.  All location mentions within them were geo-referenced by the Edinburgh Geoparser to a fine-grained Edinburgh gazetteer, and excerpts containing them are linked back to the original electronic documents of its data provider, and in the case of the British Library’s works to JISC Historical Text, to enable close reading. 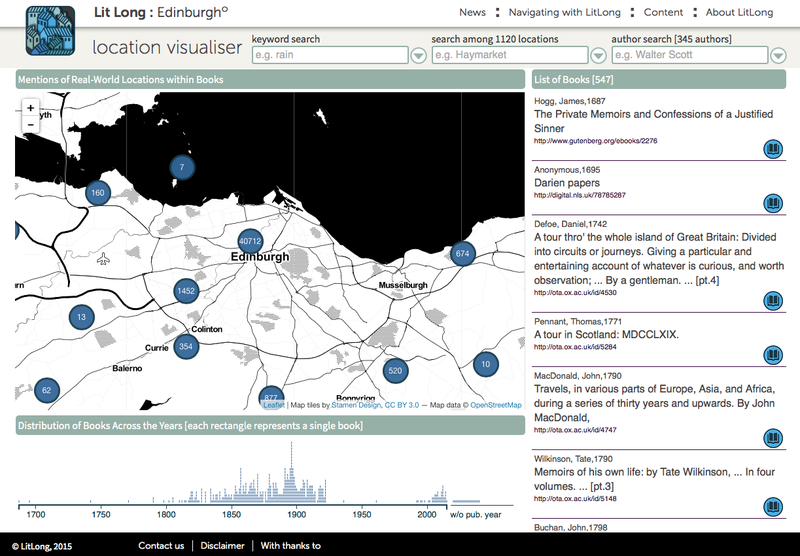 A screen shot of the Palimpsest web interface

Using the assisted curation methodology, the team were able to uncover some relatively unknown literary gems such as John and Betty’s Scotch History Visit (Margaret Williamson, 1912), a fictional children story about Scottish history, and Noctes Ambrosianae (John Wilson, 1785-1854), a series of imaginary colloquies set in Edinburgh.  At the same time, Palimpsest included all the well-known works by Stevenson, Scott and others … even Mary Shelley’s Frankenstein:

“I visited Edinburgh with languid eyes and mind; and yet that city might have interested the most unfortunate being. Clerval did not like it so well as Oxford: for the antiquity of the latter city was more pleasing to him. But the beauty and regularity of the new town of Edinburgh, its romantic castle, and its environs, the most delightful in the world, Arthur's Seat, St. Bernard's Well, and the Pentland Hills, compensated him for the change, and filled him with cheerfulness and admiration.”

In order to provide different entry points to explore the data set which may address different audiences and interest groups, the team created an interlinked visualisation which shows the literary works from multiple perspective: a map view (as an obvious way to explore geo-referenced data, and therefore one central component of the Palimpsest visualisations, available at www.litlong.org/locations alongside a timeline and a booklist. These views can be explored individually, but, at the same time, act as filters – for example, zooming into the map will update the booklist and timeline accordingly. Excerpts taken from the book and relating to individual Edinburgh locations are integrated into the visualisation in form of pop-ups and link back to the original electronic collections for further reading.  Additional filters are provided to enable more targeted searches of the literary texts by author name, location name and/or keyword. In addition, a mobile version of this interface offers the opportunity to stroll through the streets of Edinburgh and encounter literary excerpts based on the places one passes. Both visual interfaces underwent an internal testing and refinement before being released to the general public.  The Palimpsest data is also accessible via the LitLong Edinburgh mobile app available from the AppStore: https://itunes.apple.com/gb/app/litlong-edinburgh/id1004433531?mt=8 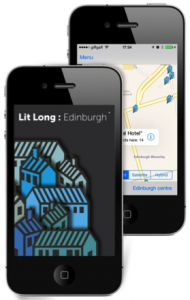 In summation, the Palimpsest project involved close collaboration between different disciplines as literary critical knowledge was vital in developing and fine-tuning not only the text processing but also the visualisation tools. Palimpsest makes it possible to see across numerous well known and less celebrated works simultaneously, and to explore their treatment of place.

Posted by Digital Research Team at 9:01 AM