BL Labs Competition and Awards for 2016

Today the Labs team is launching the fourth annual Competition and Awards for 2016. Please help us spread the word by tweeting, re-blogging, and telling anyone who might be interested!

The annual Competition is looking for transformative project ideas which use the British Library’s digital collections and data in new and exciting ways. Two Labs Competition finalists will be selected to work 'in residence' with the BL Labs team between May and early November 2016, where they will get expert help, access to the Library’s resources and financial support to realise their projects.

Winners will receive a first prize of £3000 and runners up £1000 courtesy of the Andrew W. Mellon Foundation at the Labs Symposium on 7th November 2016 at the British Library in London where they will showcase their work.

The deadline for entering is midnight British Summer Time (BST) on 11th April 2016.

Labs Competition winners from previous years have produced an amazing range of creative and innovative projects. For example:

A further range of inspiring and creative ideas have been submitted in previous years and some have been developed further.

The annual Awards, introduced in 2015, formally recognises outstanding and innovative work that has been carried out using the British Library’s digital collections and data. This year, they will be commending work in four key areas:

A prize of £500 will be awarded to the winner and £100 for the runner up for each category at the Labs Symposium on 7th November 2016 at the British Library in London, again courtesy of the Andrew W. Mellon Foundation.

The deadline for entering is midnight BST on 5th September 2016.

The Awards winners for 2015 produced a remarkable and varied collection of innovative projects in  Research, Creative/Artistic, Entrepreneurship categories and a special Jury's prize: 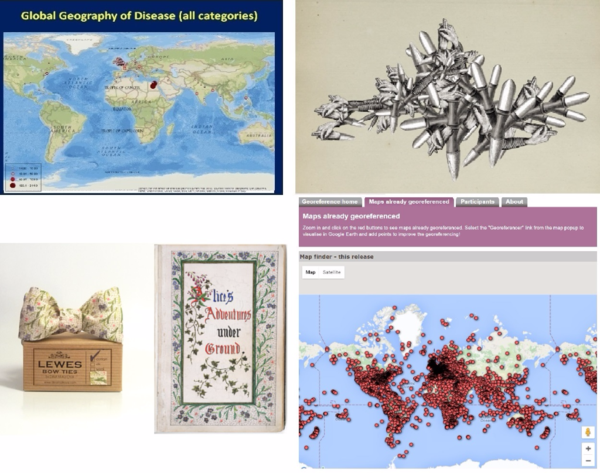 (Top-left) Spatial Humanities research group at the University Lancaster plotting mentions of disease in newspapers on a map in Victorian times,
(Top-right) A computer generated work of art, part of 'The Order of Things' by Mario Klingemann,
(Bottom-left) A bow tie made by Dina Malkova inspired by a digitised original manuscript of Alice in Wonderland
(Bottom-right) Work on Geo-referencing maps discovered from a collection of digitised books at the British Library that James Heald is still involved in.

A further range of inspiring work has been carried out with the British Library's digital content and collections.

If you are thinking of entering, please make sure you visit our Competition and Awards archive pages for further details.

Finally, if you have a specific question that can't be answered through these pages, feel free to contact us at labs@bl.uk, or why not come to one of the 'BL Labs Roadshow 2016' UK events we have scheduled between February and April 2016 to learn more about our digital collections and discuss your ideas?

We really look forward to reading your entries!

The British Library Labs project is funded by the Andrew W. Mellon Foundation.