This year, the Awards honoured projects within three key categories: Research, Creative/Artistic and Entrepreneurship. The runner up of the Entrepreneurial Award (2015) was ‘The British Library “Library Wall”: The nineteenth century “British Classics” collection’, by the Artefacto team: Sara Wingate Gray and Kate Lomax.

Below, Artefacto’s Sara Wingate Gray guest blog tells us all about their project:

The British Library “Library Wall” is a curated collection of digitised texts from the British Library's nineteenth century books collection, which people are able to freely obtain, read and share through the use of smartphones or other “smart” mobile devices such as ipads and tablets by pointing their device at the installation. The physical installation currently exists in a designed and printed large-scale poster-type format, which is easily fixed to any blank space (such as a wall, above a desk, in a coffee shop etc.) where, in essence, any potential reader might be able to pass by, look at and then download texts from it to immediately read and share on their mobile devices and beyond. It is a digital bookshelf in a physical, material form. The project explores both digital distribution technologies and open access (public domain) texts.

Find Artefacto and the Library Wall on Twitter: @artefactors ; https://twitter.com/librarywalled

Our starting point for this project was a prototype installation, which we created in September 2014 in the London borough of Haringey. The Ribbon Factory Library Wall is North London’s first digital outdoor bookshelf, enabling anyone walking by to scan a QR-coded book title and watch as the book downloads onto their smartphone or tablet, ready to read.

The success of this project (and some of the interesting technological challenges we encountered along the way) encouraged us to continue developing our Library Wall ideas, and so when the BL Labs Awards (2015) were announced we thought it would be interesting to iterate Library Wall from a British Library perspective. There is a vast source of digital content in the form of Public Domain, open-licensed material, which has been lovingly collected, curated, archived and now made available in digital form by the British Library for the benefit of humankind. But digital discoverability remains an issue. How do we facilitate new ways of enabling users to access this amazing content? Might it be worthwhile re-considering the human, physical factor in this process – can we meld the analogue experience of a reader serendipitously discovering a new book with its digital counterpart?

Overall, our Library Wall project ideas are geared towards recognising and building upon some of the emerging technological trends of the 21st century. A surge in the use of smart mobile devices and mobile internet access, as well as new internet-related technologies, has been a driving force in how users now obtain and interact with knowledge and information in the digital world. Apps, QR-codes and NFC, for example, are some of the technological innovations that have helped more recently effect this important shift. Meanwhile, in the world of the 21st century knowledge and information sector, and in particular for providers such as libraries – despite this digital access-awakening – the “overriding ebook issues for libraries continue to be the withholding of content and the imposition of problematic and differing license terms and conditions by major trade publishers” (IFLA 2014 eLending Background Paper pdf). 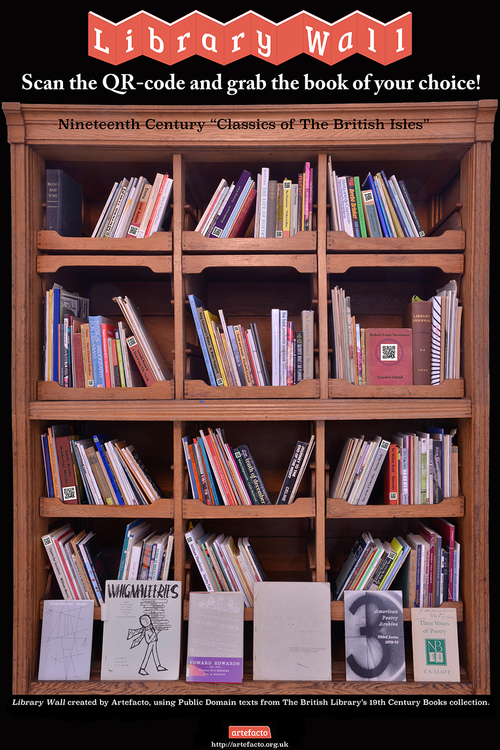 Twenty texts from the British Library's nineteenth century books collections were especially curated by us to be included as titles available for users to download from The British Library “Library Wall”. These texts were found and selected using the British Library's online catalogue to refine our search terms to incorporate texts available in the public domain and, where available, selecting a specific edition which included interesting illustrations, cover designs etc.

We then collected the URL of the PDF text, generated by the British Library’s catalogue and used this to generate a QR-code which was placed onto the spine of a corresponding book title on “Library Wall”, enabling essentially a very easy to use, simple ‘point-and-click’ process for a user to immediately access British Library content. The British Library “Library Wall” therefore removes some of the friction already implicit in a user attempting to access this same content via the British Library’s online catalogue - where purposeful searching, exact search terms and multi-clicks are required by a user before they actually reach the readable PDF version of a text.

The major challenge for this project was in the area of curation: selecting content to include in The British Library “Library Wall”. This was driven by several factors, including recognising the need to provide an easy ‘entry point’ for potential users – coming across Library Wall in a physical location. By selecting authors likely already familiar to readers (R. L. Stevenson's ‘Treasure Island’ and books by Thomas Hardy, George Eliot, Charles Dickens etc.) our approach aimed to encourage users to interact with the installation. Similarly, another challenge was that we initially wished to focus on less well-known works by familiar authors, but quickly discovered that not all well-known authors and well-known titles (let alone lesser known ones) were available in the British Library's nineteenth century books collection. This reduced our initial range of potential titles to curate, but enabled us to re-focus our range with a specific theme, deciding to focus on nineteenth century “British Classics” and selecting the most interesting editions (cover design, illustrations, etc.) of certain titles once we had focused on this specific thematic. 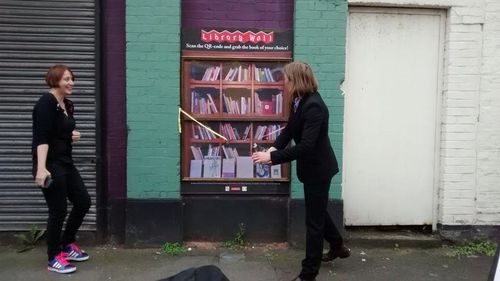 By providing a physical, material object for users to chance upon, while out in the world of their busy daily lives, Library Wall becomes a new act of public dissemination, channelling digital content out and into a local community, instead of waiting for the community to discover British Library digital content through purposeful online search and access via the British Library's online platforms.

We were thrilled to be picked as the runner-up in the Entrepreneurial category of the BL Labs Awards (2015), and have some great Library Wall plans for the future in-the-offing – we’ve already got a Library Wall operating in Karachi, as well as Haringey, so if you’re interested in us bringing a Library Wall to you and your community, or would just like to collaborate with us, please do send us a tweet @artefactors or get in touch by email.