Posted by Mahendra Mahey on behalf of Hannah-Rose Murray, finalist of the BL Labs Competition 2016

Overview of the project

The Black Abolitionist project focuses on African American lives, experiences and lectures in Britain between 1830-1895. It builds on my PhD project, which I am currently studying for at the Department of American and Canadian Studies, University of Nottingham. Working with the British Library has already proved a fortunate and enriching opportunity, and by harnessing the power of technology, we want to work together to search through thousands of newspapers to find abolitionist speeches, a process that would take years by hand. By reading black abolitionist speeches in the Nineteenth Century Newspaper Collection (and using the Flickr collection to illustrate), we can get a sense of their performances and how their lectures reached nearly every corner of Britain. Newspapers can also provide us with the locations of these meetings, and for the first time, I have mapped these locations to gather an estimate of how many lectures black abolitionists gave in Britain and to allow their hidden voices to be heard. I am updating my website to reflect this project, which can be found at www.frederickdouglassinbritain.com.

These are the maps I have so far: the map (below left) chronicles the lectures of Frederick Douglass, and the second one (on the right) represents the lectures given by other black abolitionists such as Josiah Henson, Sarah Remond, Moses Roper, William Wells Brown, Henry ‘Box’ Brown, Ida B. Wells, James Watkins and William and Ellen Craft (to name a few):

African Americans visited Britain for a variety of reasons. Many came to publish slave narratives, teach Britons about slavery and look for their support in the abolitionist cause. Others came to live in Britain safely, away from the ever-watchful eyes of slave-catchers, while several wanted to raise money to purchase family members from the jaws of slavery.

Black abolitionists made their mark in nearly every part of Great Britain, and it is of no surprise to learn they had a strong impact on London too. Lectures were held in famous meeting halls, taverns, the houses of wealthy patrons, theatres, and churches across London: we inevitably and unknowably walk past sites with a rich history of Black Britain every day.

When searching the newspapers, what we have found so far is that the OCR (Optical Character Recognition) is patchy at best. OCR refers to scanned images that have been turned into machine-readable text, and the quality of the OCR can depend on many factors – from the quality of the scan itself, to the quality of the paper the newspaper was printed on, to whether it has been damaged or ‘muddied.’ If the OCR is unintelligible, the data will not be ‘read’ properly – hence there could be hundreds of references to Frederick Douglass that are not accessible or ‘readable’ to us through an electronic search (see the image below). 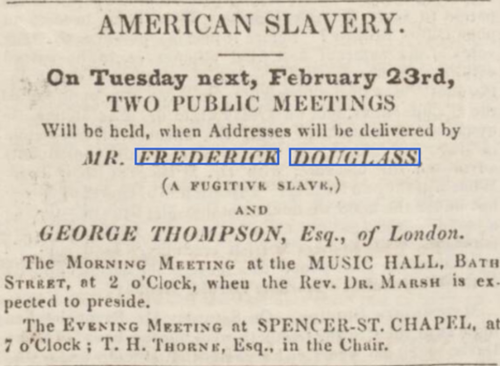 In order to clean and sort through the ‘muddied’ OCR and the ‘clean’ OCR, we need to teach the computer what is ‘positive text’ (i.e., language that uses the word ‘abolitionist’, ‘black’, ‘fugitive’, ‘negro’) and ‘negative text’ (language that does not relate to abolition). For example, the image to the left shows an advert for one of Frederick Douglass’s lectures (Leamington Spa Courier, 20 February 1847). The key words in this particular advert that are likely to appear in other adverts, reports and commentaries are ‘Frederick Douglass’, ‘fugitive’, ‘slave’, ‘American’, and ‘slavery.’ I can search for this advert through the digitized database, but there are perhaps hundreds more waiting to be uncovered.

I have spent several years transcribing many of Frederick Douglass’ speeches and most of this will act as the ‘positive’ text. ‘Negative’ text can refer to other lectures of a similar structure but do not relate to abolition specifically, for example prison reform meetings or meetings about church finances. This will ensure the abolitionist language becomes easily readable. We can then test the performance of this against some of the data we already have, and once the probability ensures we are on the right track, we can apply it to a larger data set.

The prospect of uncovering hidden speeches by African Americans is incredibly exciting, and hopefully this will add to our knowledge of the black presence in Britain: we can use these extensive sources to build a more complete picture of Victorian London in particular.

Posted by Digital Research Team at 11:48 AM