Posted by Mahendra Mahey on behalf of Nick Cave, entrant in the BL Labs Awards 2016 under the 'Artistic Category'.

Today’s blockbuster films sees long forgotten dinosaurs, futuristic warping spaceships and metallic looking beings the size of our tallest buildings, transforming from a car to a giant robot in the blink of an eye. There are even whole planets of giant alien creatures walking amongst people and trees and all of these incredible visual showcases are invading our cinema screens week in, week out.

However, back before the advent of sophisticated computer generated graphics technology, artists were using simpler photographic techniques to create short animations with zany characters, new landscapes and everyday objects to bring laughter to the masses on the small screen. One such artist was Terry Gilliam of Monty Python fame who used a technique known as stop motion animation to bring a variety of household magazine pictures to life. By cutting out different pictures, photographing and filming them individually moving over time, they became very funny animated cartoon like sketches.

I’ve always been fascinated by this amazing technique, even if it is a very time consuming one, but modern computer animation software makes this process easier. Stop motion animations simply have a quirky charm. More often than not they’re animations which are not polished, or even necessarily slick looking. It’s a style of animation which creates imaginary worlds and characters, often moving in a jagged, staccato fashion, but still somehow one that looks and feels as engaging and interesting as modern visual effects which have cost millions to create. So, with the Terry Gilliam magazine picture ideas in mind where to start, social media of course! 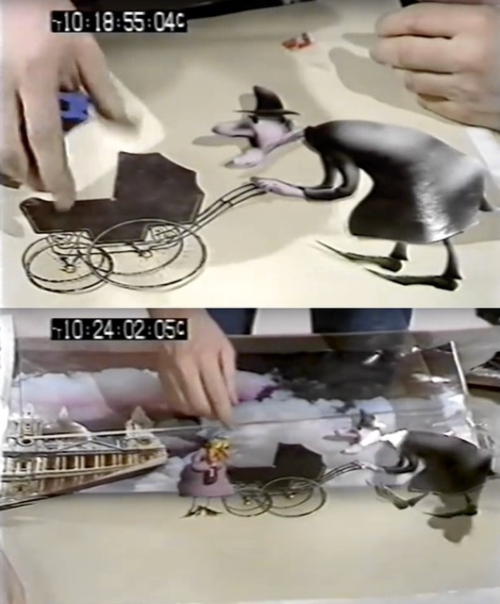 An example of working on stop motion animation

Social media is dominated by celebrity gossip and tittle tattle, breaking news, but major events also continue to play a key part in posts. This could be when celebrating sporting achievements, raving about a new film, TV show, or even an anniversary event and significantly, nostalgia.

People always like to look back and remember, which is where my 6SecondHistory idea spawned from. I chose Instagram as my social media delivery platform, partly because mini web episodes, such as crime thriller, Shield5, had been very successful on it and partly because it’s a social media platform created specifically to showcase photographs and short videos.

As copyright can be a contentious legal minefield, where to source the modern equivalent of historical magazine photos from? Well, easy, the British Library has a massive collection of freely available copyright free Flickr archive photographs and illustrations to choose from. Animals, places, people, fancy illustrations from old manuscripts, basically a wealth of interesting material. The interesting and sometimes vexing challenge in bringing these pictures to life are many, because they’re often hand drawn with no clear differentiation between foreground and background objects, plus searching for specific pictures can sometimes bring up an interesting results set. Six second animations seemed a good starting point because of the success of internet vines, also six second gifs, or videos etc. 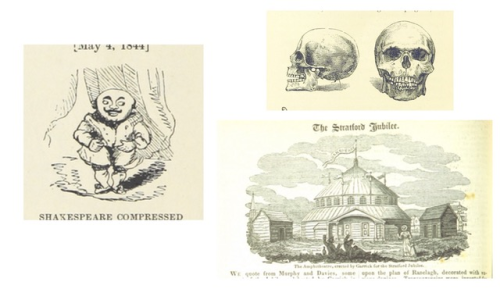 Bottom Right - British Library Flickr Shakespeare Theatre (https://flic.kr/p/i6ymLe): Image taken from page 76 of 'The Works of Shakspeare; from the text of Johnson, Steevens, and Reed. With a biographical memoir, and a variety of interesting matter, illustrative of his life and writings. By W. Harvey’ - 1825

As an example, 2016 saw the 400th anniversary of Shakespeare’s death.  Whenever the focus is on Shakespeare famous speeches are cited and one such speech is Hamlet’s Act 5 Scene 1 lament to a disembodied skull. Perfect material for a funny 6SecondHistory animation and one that could truly show off the merging of a variety of British Library archive pics, repurposed and coloured to create a comical short Hamlet animation with an element of 3D perspective in it. This was a labour of love, but I hope you agree that my short animation has brought the speech to life.

Here is a link to my animation: https://www.instagram.com/p/BDA8BhWju0D/

Posted by Digital Research Team at 8:59 AM