More than 220 people attended and the event was a fantastic experience, showcasing and celebrating the Digital Scholarship field and highlighting the work of BL Labs and their collaborators. The Symposium included a number of exciting announcements about the winners of the BL Labs Competition and BL Labs Awards, who are presented in this blog post. Separate posts will be published about the runners up of the Competition and Awards and posts written by all of the winners and runners up about their work are also scheduled for the next few weeks - watch this space!

Roly Keating, Chief Executive of the British Library announced that the overall winner of the BL Labs Competition for 2016 was...

Machine learning can extract information and insights from data on a massive scale. The project developed and optimised Convolutional Neural Networks (CNN), inspired by biological neural networks in the brain, in order to tag and caption the British Library’s Flickr Commons 1 million collection. In the first step of the project, images were classified with general categorical tags (e.g. “people”, “maps”). This served as the basis for the development of new ways to facilitate rapid online tagging with user-defined sets of tags. In the second stage, automatically generate descriptive natural-language captions were provided for images (e.g. “A man in a meadow on a horse”). This computationally guided approach has produced automatic pattern recognition which provides a more intuitive way for researchers to discover and use images. The tags and captions will be made accessible and searchable by the public through the web-based interface and text annotations will be used to globally analyse trends in the Flickr collection over time. 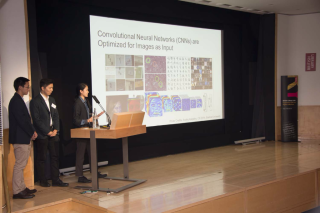 SherlockNet team presenting at the Symposium

Luda Zhao is currently a Masters student studying Computer Science at Stanford University, living in Palo Alto, California. He is interested in using machine learning and data mining to tackle tough problems in a variety of real-life contexts, and he's excited to work with the British Library to make art more discoverable for people everywhere.

Brian Do grew up in sunny California and is a first-year MD/PhD student at Harvard Medical School. Previously he studied Computer Science and biology at Stanford. Brian loves using data visualisation and cutting edge tools to reveal unexpected things about sports, finance and even his own text message history.

SherlockNet recently posted an update of their work and you can try out their SherlockNet interface and tell us what you think.

Allan Sudlow, Head of Research Development at the British Library announced that the winner of the Research Award was...

By Melodee Beals, Lecturer in Digital History at Loughborough University and historian of migration and media 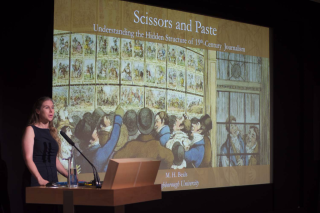 Scissors and Paste utilises the 1800-1900 digitised British Library Newspapers, collection to explore the possibilities of mining large-scale newspaper databases for reprinted and repurposed news content. The project has involved the development of a suite of tools and methodologies, created using both out-of-the-box and custom-made project-specific software, to efficiently identify reprint families of journalistic texts and then suggest both directionality and branching within these subsets. From these case-studies, detailed analyses of additions, omissions and wholesale changes offer insights into the mechanics of reprinting that left behind few if any other traces in the historical record.

Melodee Beals joined the Department of Politics, History and International Relations at Loughborough University in September 2015. Previously, Melodee has worked as a pedagogical researcher for the History Subject Centre, a teaching fellow for the School of Comparative American Studies at the University of Warwick and a Principal Lecturer for Sheffield Hallam University, where she acted as Subject Group Leader for History. Melodee completed her PhD at the University of Glasgow.

Isabel Oswell, Head of Business Audiences at the British Library announced that the winner of the Commercial Award was... 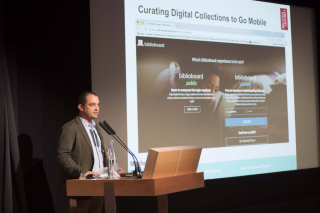 As a direct result of its collaborative work with the British Library, BiblioLabs has developed BiblioBoard, an award-winning e-Content delivery platform, and online curatorial and multimedia publishing tools to support it. These tools make it simple for subject area experts to create visually stunning multi-media exhibits for the web and mobile devices without any technical expertise. The curatorial output is almost instantly available via a fully responsive web site as well as through native apps for mobile devices. This unified digital library interface incorporates viewers for PDF, ePub, images, documents, video and audio files allowing users to immerse themselves in the content without having to link out to other sites to view disparate media formats.

Mitchell Davis founded BookSurge in 2000, the world’s first integrated global print-on-demand and publishing services company (sold to Amazon.com in 2005 and re-branded as CreateSpace). Since 2008, he has been founder and chief business officer of BiblioLabs- the creators of BiblioBoard. Mitchell is also an indie producer and publisher who has created several award winning indie books and documentary films over the past decade through Organic Process Productions, a small philanthropic media company he founded with his wife Farrah Hoffmire in 2005.

Jamie Andrews, Head of Culture and Learning at the British Library announced that the winner of the Artistic Award was...

Hey There, Young Sailor combines live action with animation, hand-drawn artwork and found archive images to tell a love story set at sea. Inspired by the works of early cinema pioneer Georges Méliès, the video draws on late 19th century and early 20th century images from the British Library's Flickr collection for its collages and tableaux. The video was commissioned by Malaysian indie folk band The Impatient Sisters and independently produced by a Malaysian and Indonesian team. 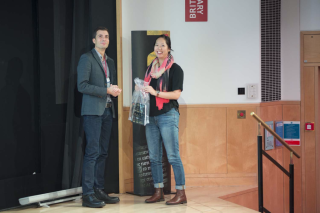 Ling Low is based between Malaysia and the UK and she has written and directed various short films and music videos. In her fiction and films, Ling is drawn to the complexities of human relationships and missed connections. By day, she works as a journalist and media consultant. Ling has edited a non-fiction anthology of human interest journalism, entitled Stories From The City: Rediscovering Kuala Lumpur, published in 2016. Her journalism has also been published widely, including in the Guardian, the Telegraph and Esquire Malaysia.

Ria Bartlett, Lead Producer: Onsite Learning at the British Library announced that the winner of the Teaching / Learning Award was...

Founded by James Baker, Lecturer at the Sussex Humanities Lab, who represented the global Library Carpentry Team (see below) at the Symposium 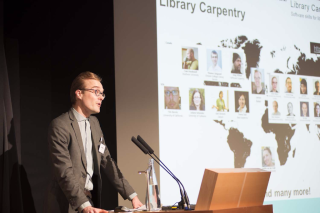 James Baker is a Lecturer in Digital History and Archives at the School of History, Art History and Philosophy and at the Sussex Humanities Lab. He is a historian of the long eighteenth century and contemporary Britain. James is a Software Sustainability Institute Fellow and holds degrees from the University of Southampton and latterly the University of Kent. Prior to joining Sussex, James has held positions of Digital Curator at the British Library and Postdoctoral Fellow with the Paul Mellon Centre for Studies of British Art. James is a convenor of the Institute of Historical Research Digital History seminar and a member of the History Lab Plus Advisory Board. 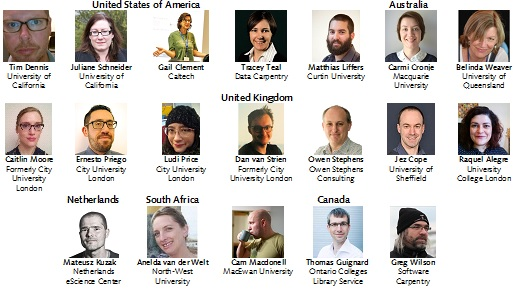 Led by Alex Mendes, Software Developer at the British Library

LibCrowds is a crowdsourcing platform built by Alexander Mendes. It aims to create searchable catalogue records for some of the hundreds of thousands of items that can currently only be found in printed and card catalogues. By participating in the crowdsourcing projects, users will help researchers everywhere to access the British Library’s collections more easily in the future. 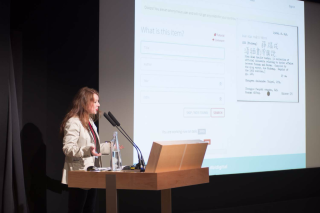 The first project series, Convert-a-Card, experimented with a new method for transforming printed card catalogues into electronic records for inclusion in our online catalogue Explore, by asking volunteers to link scanned images of the cards with records retrieved from the WorldCat database. Additional projects have recently been launched that invite volunteers to transcribe cards that may require more specific language skills, such as the South Asian minor languages. Records matched, located, transcribed or translated as part of the crowdsourcing projects were uploaded to the British Library's Explore catalogue for anyone to search online. By participating users can have a direct impact on the availability of research material to anyone interested in the diverse collections available at the British Library.

Alex Mendes has worked at the British Library for several years and recently completed a Bachelor’s degree in Computer Science with the Open University. Alex enjoys the consistent challenges encountered when attempting to find innovative new solutions to unusual problems in software development.

If you would like to find out more about BL Labs, our Competition or Awards please contact us at labs@bl.uk