As well as digitising rare early printed Indian books, the Two Centuries of Indian Print project is making available online some wonderful catalogues held by the library, generally known as the Quarterly Lists, recording all books published quarterly and by province of British India between 1867 and 1947.

The catalogues will complement the Bengali printed books and I’d like to use this blog to share a bit more about what the Quarterly Lists are and what we are doing to make them as accessible as possible for researchers of book history who want to apply digital research methods to explore their rich contents.

Firstly, a little more about the origins of these catalogues. With the passing of The (Indian) Press and Registration of Books Act, 1867 it became mandatory for all books published in provinces of British India to be sent to the provincial secretariat library for registration.  Both the India Office Library and the British Museum Library in London, later to be united in the British Library’s collection, were separately given the privilege of requesting books from these lists free of charge in what amounted to a colonial legal deposit arrangement. The act was passed with the aim of recording the ever growing number of publications originating from the various printing presses throughout India, its purpose political as well as archival.  Not all works that issued from the presses were recorded in the lists and only a small percentage were actually deposited in the London collections.  The library curators in London selected only those works which they thought were important or interesting.  The Quarterly lists were originally published as appendices in the official provincial newspapers, such as the Calcutta Gazette (below). 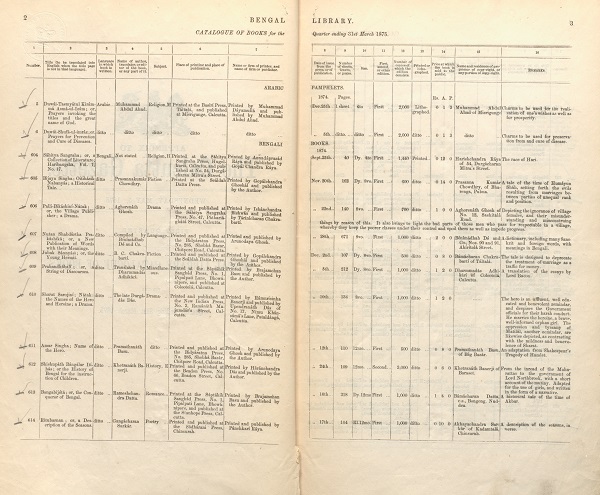 Although Independence brought an end to the arrangement for depositing publications with the India Office Library and British Museum Library, the practice of publishing catalogues of registered printed books continued until the late 1960s.

Now digitised for the first time, the Quarterly Lists will be made available as searchable PDFs via the British Library's new datasets portal, data.bl.uk, in November. Researchers will be able to examine a rich bibliographic data about books published throughout India, including the name and address of printers and publishers. If you are interested in accessing this collection please contact Tom.Derrick@bl.uk

Our next steps will be to OCR the Quarterly Lists to create ALTO XML for every page, which is designed to show accurate representations of the content layout. This will allow researchers to apply computational tools and methods to look across all of the lists to answer their questions about book history. So if a researcher is interested in what the history of book publishing reveals about a particular time period and place, we would like to make that possible by giving them full access to this dataset.

To get to this point however, we will have to overcome the layout challenge that the Quarterly Lists present. Across all of the lists we have found a few different layout styles which are rather tricky for OCR solutions to handle meaningfully. Note for instance how the list below compares to the one from the Calcutta Gazette above. Through the Digital Research strand of the project we will be seeking out innovative research groups willing to take a crack at improving the OCR quality and accuracy of tabular text extraction from the Quarterly Lists. 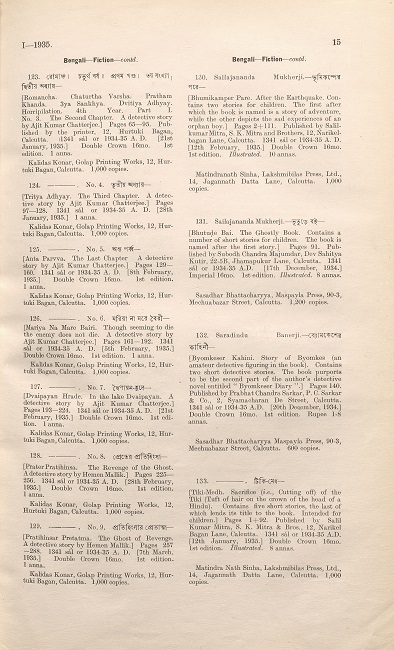 If you or anyone you know are interested in using the Quarterly Lists in your research or simply want to find out more about them, feel free to drop me an email; Tom.Derrick@bl.uk or follow more about the project @BL_IndianPrint

Posted by Digital Research Team at 9:12 AM