The 4th annual British Library Labs Symposium was held on 7th November 2016, and the event was a great success in celebrating and showcasing Digital Scholarship and highlighting the work of BL Labs and their collaborators. The exciting day included the announcement of the winners of the BL Labs Competition and BL Labs Awards, as well as of the runners up who are presented in this blog post. Posts written by all of the winners and runners up about their work are also scheduled for the next few weeks - watch this space! 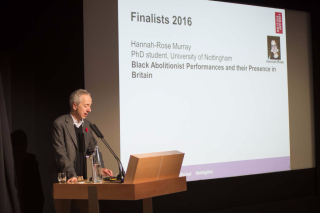 Roly Keating, Chief Executive of the British Library, welcoming Hannah-Rose Murray on to the stage.

The project focuses on African American lives, experiences and lectures in Britain between 1830–1895. By assessing black abolitionist speeches in the British Library’s nineteenth-century newspaper collection and using the British Library’s Flickr Commons 1 million collection. to illustrate, the project has illuminated their performances and how their lectures reached nearly every corner of Britain. For the first time, the location of these meetings has been mapped and the number and scale of the lectures given by black abolitionists in Britain has been evaluated, allowing their hidden voices to be heard and building a more complete picture of Victorian London for us. Hannah-Rose has recently posted an update about her work and the project findings can also be found on her website: www.frederickdouglassinbritain.com.

BL Labs Awards runners up for 2016

The project represents an innovative partnership between researchers in English literature, Electrical & Computer Engineering, and data analytics in pursuit of a seemingly simple research question: How can computer vision and image processing techniques be adapted for large-scale interpretation of historical illustrations? The project is developing methods in image analytics to study a corpus of illustrated nineteenth-century British newspapers from the British Library’s collection, including The Graphic, The Illustrated Police News, and the Penny Illustrated Paper. Paul Fyfe and Qian Ge gave a recorded acceptance speech at the Symposium as they were unable to attend in person.

It aims to suggest ways of adapting image processing techniques to other historical media while also pursuing scholarship on nineteenth-century visual culture and the illustrated press. The project also exposes the formidable technical challenges presented by historical illustrations and suggests ways to refine computer vision algorithms and analytics workflows for such difficult data. The website includes sample workflows as well as speculations about how large-scale image analytics might yield insights into the cultural past, plus much more: http://ncna.dh.chass.ncsu.edu/imageanalytics 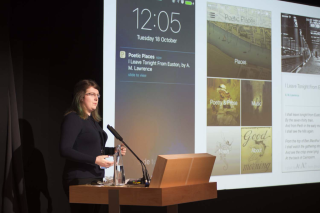 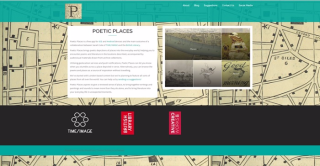 Poetic Places is a free app for iOS and Android devices which was launched in March 2016. It brings poetic depictions of places into the everyday world, helping users to encounter poems in the locations described by the literature, accompanied by contextualising historical narratives and relevant audiovisual materials. These materials are primarily drawn from open archive collections, including the British Library Flickr collection. Utilising geolocation services and push notifications, Poetic Places can (whilst running in the background on the device) let users know when they stumble across a place depicted in verse and art, encouraging serendipitous discovery. Alternatively, they can browse the poems and places via map and list interfaces as a source of inspiration without travelling. Poetic Places aspires to give a renewed sense of place, to bring together writings and paintings and sounds to mean more than they do alone, and to bring literature into people’s everyday life in unexpected moments.

Artistic Award runner up
Jamie Andrews, Head of Culture and Learning at the British Library announced that the runner up of the Artistic Award was... 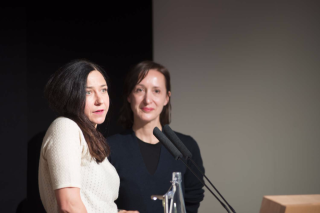 The project involved the creation of an 80 second animation and five vines which accompanied the Austrian contribution to the International Fashion Showcase London, organised annually by the British Council and the British Fashion Council. Fashion Utopia garnered creative inspiration from the treasure trove of images from the British Library Flickr Commons collection and more than 500 images were used to create a moving collage that was, in a second step, juxtaposed with stop-frame animated items of fashion and accessories.

The PhD Abstracts Collections in FLAX

The project presents an educational research study into the development and evaluation of domain-specific language corpora derived from PhD abstracts with the Electronic Theses Online Service (EThOS) at the British Library. The collections, which are openly available from this study, were built using the interactive FLAX (Flexible Language Acquisition flax.nzdl.org) open-source software for uptake in English for Specific Academic Purposes programmes (ESAP) at Queen Mary University of London. The project involved the harvesting of metadata, including the abstracts of 400,000 doctoral theses from UK universities, from the EThOS Toolkit at the British Library. These digital PhD abstract text collections were then automatically analysed, enriched, and transformed into a resource that second-language and novice research writers can browse and query in order to extend their ability to understand the language used in specific domains, and to help them develop their abstract writing. It is anticipated that the practical contribution of the FLAX tools and the EThOS PhD Abstract collections will benefit second-language and novice research writers in understanding the language used to achieve the persuasive and promotional aspects of the written research abstract genre. It is also anticipated that users of the collections will be able to develop their arguments more fluently and precisely through the practice of research abstract writing to project a persuasive voice as is used in specific research disciplines. 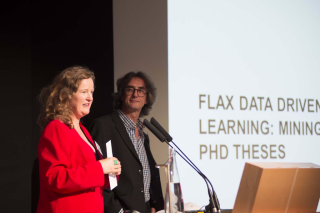 Alannah Fitzgerald and Chris Mansfield receiving the Runner Up Teaching and Learning Award on behalf of the FLAX team. 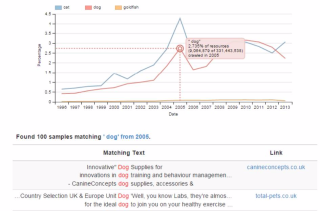 SHINE is a state-of-the-art demonstrator for the potential of Web Archives to transform research. The current implementation of SHINE exposes metadata from the Internet Archive's UK domain web archives for the years 1996- 2013. This data was licensed for use by the British Library by agreement with JISC. SHINE represents a high level of innovation in access and analysis of web archives, allowing sophisticated searching of a very large and loosely-structured dataset and showing many of the characteristics of "Big Social Data". Users can fine-tune results to look for file-types, results from specific domains, languages used and geo-location data (post-code look-up). The interface was developed by Web Archive technical development alongside the AHRC-funded Big UK Domain Data for the Arts and Humanities project. An important concept in its design and development was that it would be researcher-led and SHINE was developed iteratively with research case studies relating to use of UK web archives. 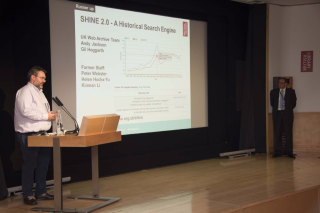 Andy Jackson, Receiving the Runner up Staff Award on behalf of the SHINE team

The lead institution for SHINE was the University of London, with Professor Jane Winters as principle investigator, and former British Library staff members Peter Webster and Helen Hockx were also instrumental in developing the project and maintaining researcher engagement through the project.

Posted by Digital Research Team at 10:16 AM