This post is by Digital Curator Stella Wisdom, on twitter as @miss_wisdom & BL Labs collaborator Gary Green, on twitter as @ggnewed. Gary and Stella are interested in many things including games and interactive fiction.

Last Friday it was Late at the Library: You Are Here! an event celebrating all things cartographic to coincide with the current exhibition Maps and the 20th Century: Drawing the Line.  So we thought it was a perfect excuse to bring out our mappy boardgames and set up a pop-up games parlour similar to the games area that we run in the British Library for International Games Day at Your Library in November. Fortunately many games use maps and we had great fun playing Carcassonne, Pandemic and Ticket To Ride Europe. Big kudos to the awesome Ben O'Steen, Sarah Cole and Jason Webber for all their help on the night. Also deserving a mention is BL Labs resident artist Michael Takeo Magruder, whose stand was opposite us. Michael was demonstrating the new Oculus version of his A New Jerusalem, a really cool immersive virtual reality art installation, you can see a video about the work here. 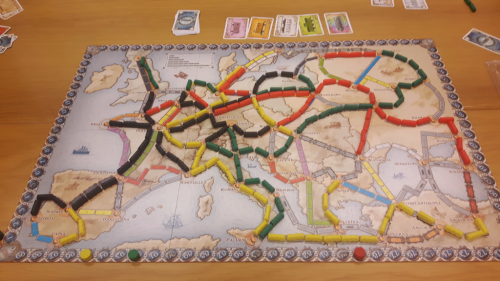 In addition to playing boardgames, Gary has been busy setting up an online interactive fiction game jam; the theme of which is Homer's The Odyssey - an ancient tale of Odysseus’ journey home across the seas after the Trojan War, with a mix of fantastical mythical creatures, gods and mortals.

The aim is to encourage participants to create an interactive text based story based on this work. If you're not sure what interactive stories are, the IFDB site will give you a good idea. All text based digital works are welcome, including interactive fiction, text games and visual novels.

Even though the focus is on creating a written interactive story, it can include other media too – images, sound, video etc. If you’re looking for visual inspiration we’ve identified many images from the British Library's Flickr gallery, which you can use freely in your story if you want to. If you do use them, it would be lovely if you can give the British Library a mention in the credits of your game. Links to the collections of images appear on this page.

This writing challenge is tied in with Read Watch Play, a partnership of libraries worldwide encouraging themed discussions of books, films, music and games, each month they have a theme and for March it is #waterread. 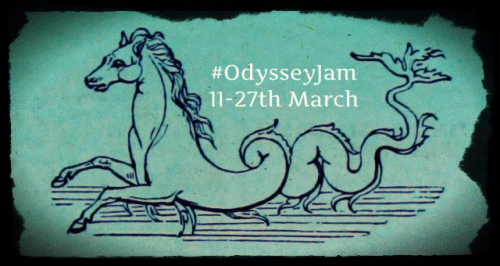 The #OdysseyJam challenge runs 11th – 27th March 2017,  it is hosted on the itch.io game site (https://itch.io/jam/odysseyjam) and anyone at all in the world can submit an entry… whether you’ve written interactive fiction before or not.

The Odyssey was epic, but your entry into #OdysseyJam doesn’t have to be a long piece of work. It also doesn’t have to cover the whole of the Odyssey – you could create something that focuses on a small part of the tale, and you don’t even have to set it in ancient Greece, just use The Odyssey for inspiration. You can also work as part of a team, or it can be a solo effort.

Want to join in but never made an interactive text based story before? Why not try using free software, such as:

If you post about your story on social media please use the hashtag #OdysseyJam, we can't wait to see the entries.