Digital Curator Mia Ridge: today we have a guest post by Matthew Symonds from the Centre for Editing Lives and Letters on the Archaeologies of reading project, based on a talk he did for our internal '21st century curatorship' seminar series. Over to Matt...

Some people get really itchy about the idea of making notes in books, and dare not defile the pristine printed page. Others leave their books a riot of exclamation marks, sarcastic incredulity and highlighter pen.

Historians – even historians disciplined by spending years in the BL’s Rare Books and Manuscripts rooms – would much prefer it if people did mark books, preferably in sentences like “I, Famous Historical Personage, have read this book and think the following having read it…”. It makes it that much easier to investigate how people engaged with the ideas and information they read.

Brilliantly for us historians, rare books collections are filled with this sort of material. The problem is it’s also difficult to catalogue and make discoverable (nota bene – it’s hard because no institutions could afford to employ and train sufficient cataloguers, not because librarians don’t realise this is an issue).

The Archaeology of Reading in Early Modern Europe (AOR) takes digital images of books owned and annotated by two renaissance readers, the professional reader Gabriel Harvey and the extraordinary polymath John Dee, transcribes and translates all the comments in the margin, and marks up all traces of a reader’s intervention with the printed book and puts the whole thing on the Internet in a way designed to be useful and accessible to researchers and the general public alike. 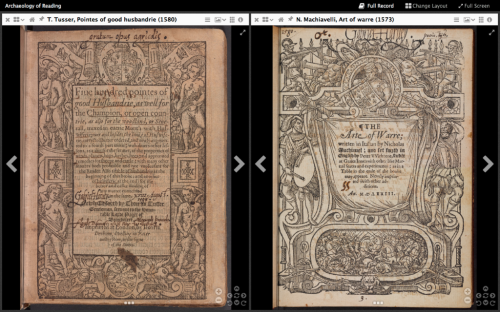 Screenshot, The Archaeology of Reading in Early Modern Europe

AOR is a digital humanities collaboration between the Centre for Editing Lives and Letters (CELL) at University College London, Johns Hopkins University and Princeton University, and generously funded by the Andrew W. Mellon Foundation.

More importantly, it’s also a collaboration between academic researchers, librarians and software engineers. An absolutely vital consideration of how we planned AOR, how we work on it, how we’re planning to expand it, was to identify a project that could offer a common ground to be shared between these three interests, where each party would have something to gain from it.

As one of the researchers, it was really important to me to avoid forming some sort of “client-provider” relationship with the librarians who curate and know so much about my sources, and the software engineers who build the digital infrastructure.

But we do use an academic problem as a means of giving our project a focus. In 1990, Antony Grafton and the late Lisa Jardine published their seminal article ‘“Studied for Action: how Gabriel Harvey read his Livy’ in the journal Past & Present.

One major insight of the article is that people read books in conjunction with one another, often for specific, pragmatic purposes. People didn’t pick up a book from their shelves, open at page one and proceed through to the finis, marking up as they went. They put other books next to them, books that explained, clarified, argued with one another.

By studying the marginalia, it’s possible to reconstruct these pathways across a library, recreating the strategies people used to manage the vast quantities of information they had at their disposal.

In order to produce this archaeology of reading, we’ve built a “digital bookwheel”, an attempt to recreate the revolving reading desk of the renaissance period which allowed the lucky owner to manoeuvre back and forth their books. From here, the user can call up the books we’ve digitised, read the transcriptions, and search for particular words and concepts. 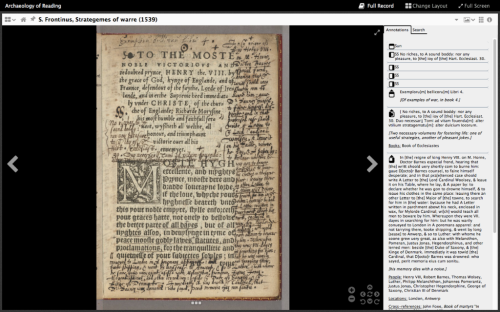 Screenshot, The Archaeology of Reading in Early Modern Europe

It’s built out of open source materials, leveraging the International Image Interoperability Framework (IIIF) and the IIIF-compliant Mirador 2 Viewer. Interested parties can download the XML files of our transcriptions, as well as the data produced in the process.

The exciting thing for us is that all the work on creating this digital infrastructure – which is very much a work in progress -- has provided us with the raw materials for asking new research questions, questions that can only be asked by getting away from our computer and returning back to the rare books room.