This post is by Digital Curator Stella Wisdom, on twitter as @miss_wisdom & BL Labs collaborator Gary Green  from Surrey Libraries, on twitter as @ggnewed. Gary and Stella are interested in many things including games and interactive fiction.

Earlier this year we blogged about the game jam Odyssey Jam, which Gary organised, as part of Read Watch Play. The idea behind it was to encourage people to create a text based game or piece of interactive fiction based on Homer's The Odyssey over a 2 week period. The purpose of the game jam was to support literacy and the development of readers and writers.

After the two week game making period entrants were encouraged to upload their entries to itch.io so that others could play them. Anyone around the world was able to enter, and at the end of the game jam there were 10 entries, including from people who had never made a game or written a piece of interactive fiction before, and who had never previously been involved in a game jam.

It was great to see a variety of style and content in the entries and how each developer had interpreted the theme - no two were the same. Some chose to create pure text games (The Long Ing Blink; Islands and Witches), others focused on creating entries that were more visual but still included text (Taith; A flower from Hermes). There were humorous games (108 suitors; The Perils of Penelope), games set in their original setting, and others which re-set the Odyssey in a new context (Come Back Home; Hyperions Wake).

Game developers were also encouraged to share their work in progress on Twitter, and a few did just that. It was great to see how their games were taking shape and how enthusiastic they were about their involvement in the jam. A college in Milan encouraged students on their creative writing course to participate and a couple of their entries were submitted to the jam.

As part of Odyssey Jam we also encouraged entrants to make use of the digitised images on Flickr that The British Library had released under a creative commons license. We identified a number of ancient Greece themed images from the Flickr collection. A couple of entries used these images, e.g. No One and 108 suitors. 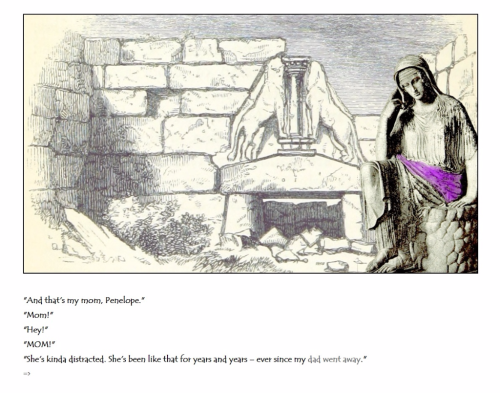 Scene from 108 Suitors by Lynda Clark

The games are available to play online or download, so please try them out and share. You can also watch short play-throughs of the entries thanks to video game blogger Jupiter Hadley and Emily Short wrote about the game jam on her excellent blog. Thanks to all the game developers involved in Odyssey Jam; it was fun playing your entries, and thanks to all who helped promote the jam.

If Odyssey jam has whetted your appetite and you are interested in writing interactive fiction,  we are pleased to share news that the British Library is running a new course:  The Infinite Library: Interactive Fiction Summer School 17-21 July 2017. This is led by multi-award-winner Dr Abigail Parry and will be taught by specialists in fiction, interactive fiction and games writing, including:

With their expert guidance attendees will tackle dialogue chains, reader choice and multiple endings. Plus given technical support to explore the possibilities offered by Twine, a simple open-source programme for managing branching text. More details on the summer school can be found at https://www.bl.uk/events/the-infinite-library-interactive-fiction-summer-school.