In the Spotlight: Application design

Alex Mendes, Research Software Engineer with the British Library's Digital Scholarship team, provides some insight into our adaptation of an existing crowdsourcing platform to meet our varied needs.

Earlier this month, we announced a preview of a new crowdsourcing project we're working on. In the Spotlight aims to make the libraryâ€™s collection of historic playbills easier to find. This post will explore some of the factors involved in our initial project design and the technologies used within the core application.

The In the Spotlight homepage

During the early stages of development we talked to people working on various projects that deal with similar material, such as Ensemble @ Yale, which is an experiment into crowdsourcing transcriptions of digitised programs for Yale dramatic productions. While these conversations were incredibly useful, and the projects inspiring, after some deliberation we decided that the overhead of modifying such an application to fit our particular needs was too large.

Such projects have often been built for, and become increasingly tightly coupled with, a particular institutional purpose. By starting with such an application and modifying it heavily with our own institution-specific code we would likely be assuming sole responsibility for future maintenance of that application. Being unable to merge our code back into the original, we would be left managing our own modified version; one with limited usefulness outside an increasingly specific purpose. We wanted to avoid creating a significant maintenance issue, and sought a more generic, yet customisable platform.

Accordingly, we turned to our  existing crowdsourcing platform, LibCrowds, which was launched in June 2015 to host the Convert-a-Card projects and help turn printed card catalogues into a searchable online database. The platform is based on PyBossa, a Python library for building crowdsourcing projects that is still very much in active development.

We hoped that it would be relatively quick to generate a new set of projects for collecting the crowdsourced playbills data. In fact, our first prototypes were ready back in April. However, as more detailed requirements were established we soon began to come up against some of the limits of the platformâ€™s existing architecture. 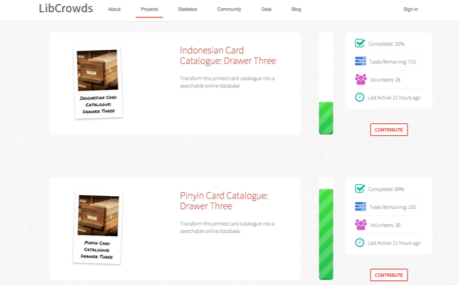 The projects page from the old LibCrowds theme

For instance, we needed to present the appearance of a self-contained website designed around the playbills, with additional pages and features not present in the core PyBossa model. We previously navigated some of these issues by developing custom plugins, but as the need for these grew the approach was becoming unwieldy.

Not long before we encountered these issues, PyBossa had released an update allowing for it to be run as a headless backend server. 'Headless' means that it can be run as a stand-alone piece of software, separate from any graphical user interface, and be interacted with purely via an API. This differs from the â€˜traditionalâ€™ website, in which the front and backend communicate directly, causing the functionality and architecture of one to be heavily dependent on the other.

We took the plunge and decided to drop some of the work that had gone into the redesign up to that point, opting to run a headless PyBossa instance as our backend and rewriting our frontend as a separate single-page application (SPA), using the Vue.js framework. This approach gives us the freedom to structure the website as required, without having to modify large amounts of backend code. Backend plugins still have a place but the majority of custom functionality can be handled within the browser. This new frontend application comprises a set of core LibCrowds pages, including a homepage and an administration interface where staff can manage the projects. Sitting beneath these, each project has its own set of themed pages, giving the appearance of bespoke websites for each project. Crucially, the new architecture managed this without requiring us to maintain multiple application instances, or the handling of user authentication between those instances.

In hindsight, we should have spent more time on requirements gathering at the start of the process, as we iterated through a number of possible system designs before settling on our current architecture. However, we seem to be moving towards quite a clean solution and one that will hopefully provide a satisfying user experience.

The application is still in the beta phase and all suggestions are welcome via the GitHub issues page or the project forum.

The BL Labs team are pleased to announce that the fifth annual British Library Labs Symposium will be held on Monday 30 October, from 9:30 - 17:30 in the British Library Conference Centre, St Pancras. The event is FREE, although you must book a ticket in advance. Don't miss out!

The Symposium showcases innovative projects which use the British Libraryâ€™s digital content, and provides a platform for development, networking and debate in the Digital Scholarship field. 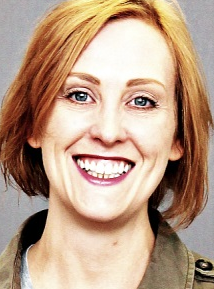 Josie Fraser will be giving the keynote at this year's Symposium

This year, Dr Adam Farquhar, Head of Digital Scholarship at the British Library, will launch the Symposium and Josie Fraser, Senior Technology Adviser on the National Technology Team, based in the Department for Digital, Culture, Media and Sport in the UK Government, will be presenting the keynote.

There will be presentations from BL Labs Competition (2016) runners up, artist/researcher Michael Takeo Magruder about his 'Imaginary Cities' project and lecturer/researcher Jennifer Batt about her 'Datamining verse in Eighteenth Century Newspapers' project.

After lunch, the winners of the BL Labs Awards (2017) will be announced followed by presentations of their work. The Awards celebrates researchers, artists, educators and entrepreneurs from around the world who have made use of the British Library's digital content and data, in each of the Awardsâ€™ categories:

Posted by Digital Research Team at 8:54 AM

Introducing... Playbills In the Spotlight

Playbills were sheets of paper handed out or posted up (as in the picture of a Portsmouth theatre, below) to advertise entertainments at theatres, fairs, pleasure gardens and other such venues. The British Library has a fantastic collection of playbills dating back to the 1730s. Looking through them is a lovely way to get a glimpse at how Britons entertained themselves over the past 300 years. 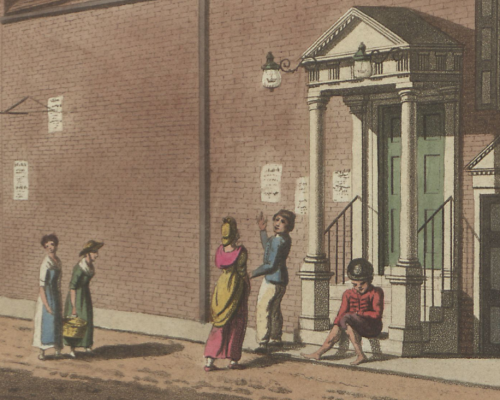 Why do playbills matter?

The playbills are a great resource for academic and community researchers interested in theatre and cultural history or seeking to understand their local or family history. They're full of personal names, including actors, playwrights, composers, theatre managers and ticket sellers. The playbills list performances of plays we know and love now alongside less well-known, even forgotten plays and songs. But individual playbills are hard to find in the British Library's catalogues, because they are only listed as a group (in the past they were bound into volumes of frequently miscellaneous sheets) with a brief summary of dates and location/theatre names. The rich details captured on each historical page - from personal names to popular songs and plays to lost moments in theatrical history - aren't yet available to search online.

What is In the Spotlight?

We're launching a project called In the Spotlight soon to make these late 18th - late 19th century digitised playbills more findable online, and to give people a chance to see past entertainments as represented in this collection. In this new crowdsourcing project, members of the public can help transcribe titles, names and locations to make the playbills easier to find. 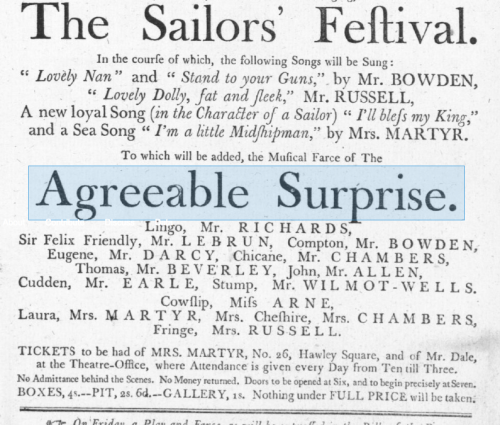 Detail from a playbill

We're starting with a very simple but fun task: mark out the titles of plays by drawing around them. The screenshot shows how varied the text on playbills can be - it's easy enough for people to spot the title of upcoming plays on the page, but it's not the kind of task we can automate (yet). You'll notice the playbills used different typefaces, sizes and weights with apparent abandon, which makes it tricky for a computer to work out what's a title and what's not. That's why we need your help!

How you can help

We've chosen two volumes from the Theatre-Royal, Plymouth and one from the Theatre Royal, Margate to begin with. You can find out more about the project and the playbills, or you can just dive in and play a role: https://playbills.libcrowds.com

This project is an 'alpha', work-in-progress that we think is almost but not quite ready for its moment in the spotlight. In theatrical terms, weâ€™re still in rehearsal. Behind-the-scenes, we're preparing the transcription tasks for you, but in the meantime we're excited about giving people a chance to explore the playbills while marking up titles.

Your efforts will help uncover the level of detail important to researchers: titles; names of actors, dramatis personae; dates of performance, and the details of songs performed. Who knows what researchers will discover when the collection is more easily searchable? Key information from individual playbills will be added to the Library's main catalogue to permanently enhance the way these playbills can be found and reviewed for the benefit of all. The website also automatically makes the raw data available for re-use as tasks are completed.

We're taking an iterative approach and releasing a few volumes to test the approach and make sure the tasks we're asking for help with are sufficiently entertaining. Once we have sets of marked up titles for each volume of playbills, they're ready for the transcription task. Your comments and feedback now will make a big difference in making sure the version we formally launch is as entertaining as possible.

Please have a go and do let us know what you think: do the instructions make sense? Do the tasks work as you expected? Is there too much to mark and transcribe, or too little? Are you comfortable using the project forum to discuss the playbills? Are there other types of tasks you'd like to suggest for the pages you've seen? You can help by posting feedback on the project forum, emailing us digitalresearch@bl.uk or tweeting @LibCrowds.

Please consider this your official invitation to our dress rehearsal - we hope you'll find it entertaining! Join us and help us put playbills back in the spotlight at https://playbills.libcrowds.com.