Last week over 150 data enthusiasts descended on the British Library as the Digital Scholarship Team played host to Databeers – London, a global data-oriented networking group started in Spain and now in over twenty cities around the world. There is frankly nothing more fun for us than downing some beers, listening to great data talks, and introducing the British Library to a whole new audience---particularly those who may not have considered the Library as anything other than a staid place with a whole lot of old books, let alone ventured through the front doors! 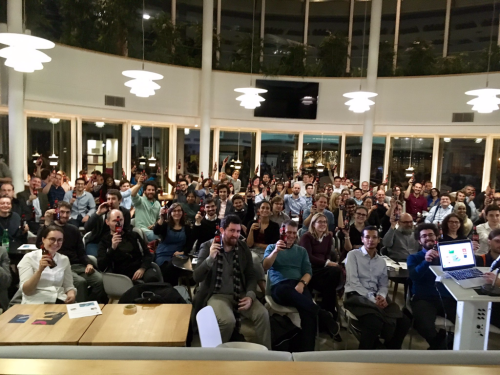 Home to the UK Web Archive, Turing Institute and a staggering amount of digital collections and data, the British Library is a thriving place for data-centric research and our team is here to support that  innovative use of the Library’s digital content.

To get a sense of the many ways in which we do this, pop along to our upcoming 5th Annual BL Labs Symposium on Monday 30 October 2017, our annual networking and awards event showcasing interesting projects which have used the British Library's digital content over the past year.

Posted by Digital Research Team at 10:02 AM