Heritage and Data: Challenges and Opportunities for the Heritage Sector

The AHRC Heritage Priority Area, Heritage Futures, the Alan Turing Institute and the British Library have recently released the report ‘Heritage & Data: Challenges and Opportunities for the Heritage Sector’.

This report captures key issues raised during the ‘Heritage and Data Workshop’ event that was held at the British Library in June 2017. The workshop, envisaged as a start of a sector-wide heritage data conversation, brought together key representatives from the UK heritage industry and academic community to discuss challenges and opportunities, arising as data becomes ever more significant in the heritage sector.

The workshop attempted to understand the existing capacity and data developments in larger heritage organisations through the case studies from the National Archives, British Museum, Heritage Lottery Fund, Historic England and the British Library. It was acknowledged, however, that data opportunities are of great importance, and even more challenging, for smaller heritage organisations. This will require further discussion in the future. 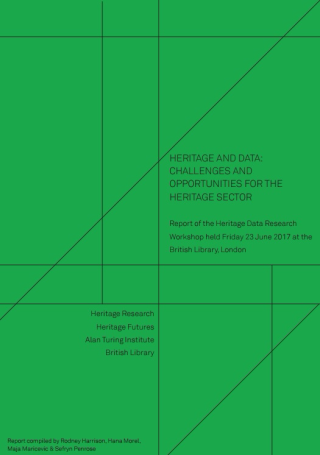 Based on the case studies presented, it was evident that many organisations are actively developing their data capabilities, as well as a range of increasingly successful and innovative projects, such as the National Archives’ project Traces through Time, Heritage Index developed by the Heritage Lottery Fund and the RSA, or the British Museum’s project ResearchSpace. It was encouraging to hear that data is increasingly seen as a cross-organisational and strategic issue, as in the examples of the British Library’s development of its first Data Strategy and the Historic England’s work to develop a set of organisational priorities related to data.

The case studies presented at the workshop led to a series of discussions, which were aiming to distil a set of shared themes, research questions and recommendations that would move heritage data developments forward.

The participants were united in their belief that data will have transformative effect on heritage practice in collecting, curating and managing both natural and cultural heritage, as well as in engaging and understanding audiences. At the same time, it was recognised that further advancement of heritage data is dependent on the sector’s ability to address the issues of transparency and privacy, and to build trust among partners and the public.

An important principle defined by the workshop was a vital requirement for interdisciplinary research and cross-sector collaboration, with data specialists working in close collaboration with domain experts to ensure quality of data and relevant contextualisation and interpretation.

The workshop participants also emphasised the need for a stronger collective voice in shaping policy and investment, as well as a need for a joint effort to raise the profile of data with audiences.

The report captures a number of both long-term and more immediate recommendations. In the long-term, one particularly challenging area is a range of infrastructure related challenges that need solving in order to enable interoperability and more integrated discovery of heritage data. This and the other recommendations all share a requirement for greater collaboration across the sector, hence an immediate recommendation is to explore the development of an exchange space, or a hub, to share experiences and best practice.

This post is by Maja Maricevic, the British Library's Head of Higher Education, on twitter as @MajaMaricevic.

Posted by Digital Research Team at 11:17 AM