The Flitch of Bacon: An Unexpected Journey Through the Collections of the British Library

Digital Curator Dr. Mia Ridge writes: we're excited to feature this guest post from an In the Spotlight participant. Edward Mills is a PhD student at the University of Exeter working on Anglo-Norman didactic literature. He also runs his own (somewhat sporadic) blog, ‘Anglo-Normantics’, and can be found Tweeting, rather more frequently, at @edward_mills.

Many readers of [Edward's] blog will doubtless be familiar with the work being done by the Digital Scholarship team, of which one particularly remarkable example is the ‘In the Spotlight‘ project. The idea behind the project, for anyone who may have missed it, is absolutely fascinating: to create crowd-sourced transcriptions of part of the Library’s enormous collection of playbills. The part of the project that I’ve been most involved with so far is concerned with titles, and it’s a two-part process; first, the title is identified out of the (numerous) lines of text on the page, and once this has been verified by multiple volunteers, it is then fed back into the database as an item for transcription. 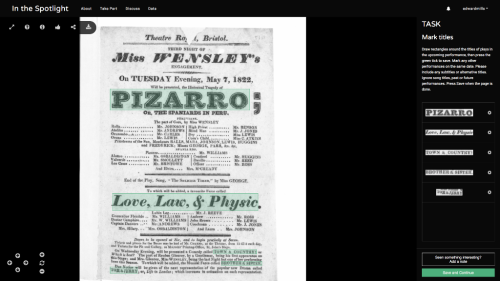 In the Spotlight interface

The real fascination of this project – for me at least – lies in the context that underpins each and every one of the plays that are presented for transcription. Every title, many of which can be traced or transcribed within a few seconds of them first appearing on my screen, belies hundreds of hours of human endeavour, whether it be the writing of the play itself, the designing of the playbill, or the performance itself. Expand the storytelling ‘net’ out to include the playbill as a whole, and the questions become more interesting still: who came up with the title, Love, Law, & Physic? How will Mr. Williams cope with playing the roles of Pizarro and Counsellor Flexible on the same night? Are ‘Mr. Lewis’ and ‘Miss Lewis’ a theatrical father-daughter double-act?

Often, though, the titles alone are more than sufficient to pique my interest. One such intriguing morsel came to light during a recent transcribing stint, when I found myself faced with a title that raised even more questions than Love, Law, & Physic: 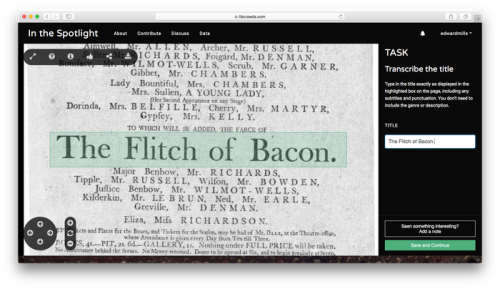 Playbill for a performance of The Flitch of Bacon

In my day-job, I’m actually a medievalist, which meant that any play entitled The Flitch of Bacon was bound to pique my interest. The ‘flitch’ refers to an ancient – and certainly medieval –  custom in Dunmow, Essex, wherein couples who could prove that they had never once regretted their marriage in a year and a day would be awarded a ‘flitch’ (side) of bacon in recognition of their fidelity. I first came across the custom of these ‘flitch trials’ while watching an episode of the excellent Citation Needed podcast, and was intrigued to learn from there that references to the trials existed as far back as Chaucer (more on which later). The trials have an unbroken tradition stretching back centuries, and videos from 1925, 1952 and 2012 go some way towards demonstrating their continuing popularity. What the British Library project revealed, however, was that the flitch also served as the driver for artistic creation in its own right. A little bit of digging revealed that the libretto to the 1776 Flitch of Bacon farce has been digitised as part of the British Library’s own collections, and the lyrics are every bit as spectacular as one might expect them to be. 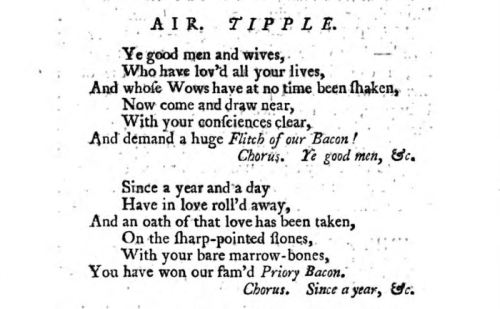 So far, so … unique. But, of course, the medievalist that dwells deep within me couldn’t resist digging into the history of the tradition, and once again the British Library’s collections came up trumps. The official website for the Dunmow Flitch Trials (because of course such a thing exists) proudly asserts that ‘a reference … can even be found within Chaucer’s 14th-century Canterbury Tales‘, which of course can easily be checked with a quick skim through the Library’s wonderful catalogue of digitised manuscripts. The Wife of Bath’s Prologue opens with the titular wife describing her attitude towards her first three husbands, whom she ‘hadde […] hoolly in myn honde’. She keeps them so busy that they soon come to regret their marriage to her, forfeiting their right to ‘the bacoun …that som men fecche in Essex an Donmowe’ in the process:

‘The bacoun was nought fet for hem I trowe / That som men fecche in Essex an Donmowe’. From the Wife of Bath’s Tale (British Library, MS Harley 7334, fol. 89r).

Chaucer’s reference to the flitch custom is frequently taken, along with William Langland’s allusion in Piers Plowman to couples who ‘do hem to Donemowe […] To folwe for the fliche’, to be the earliest reference to the tradition that can be found in English literature. Once again, though, the British Library’s collections can help us to put this particular statement to the test; as you’ve probably guessed by now, they show that there is indeed an earlier reference to the custom waiting to be found. 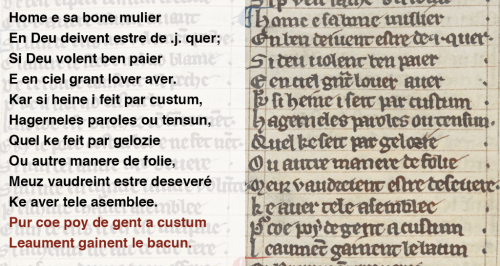 Our source for this precocious French-language reference is MS Harley 4657. Like many surviving medieval manuscripts, this codex is often described as a ‘miscellany’: that is, a collection of shorter works brought together into a single volume. In the case of Harley 4657, the book appears to have been designed as a coherent whole, with the texts copied together at around the same time and sharing quires with each other; this is perhaps explained by the fact that the texts contained within it are all devotional and didactic in nature. (Miscellanies that were, by contrast, put together at a later date are known as recueils factices – another useful term, along with the ‘flitch of bacon’, to slip into conversation with friends and family members.) The bulk of the book is taken up by the Manuel des pechez, a guide to confession that was later translated into English by Robert Manning as Handling Synne. It’s in this text that the flitch custom makes an appearance, as part of a description of how many couples do not deserve any recompense for loyalty on account of their mutual mistrust (fol. 21): 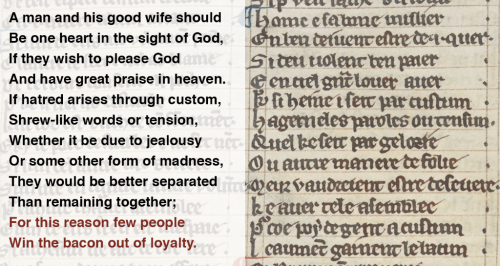 With the Harley manuscript being dated to the early fourteenth century, around a century before the Canterbury Tales manuscript, the flitch custom has clearly enjoyed, thanks to the ‘French of England’, an even longer life than we might otherwise have expected. Our 1776 flitch farce, then, was drawing on a tradition at least 500 years old; in the face of such an intimidating, multilingual history, it’s perhaps unsurprising that our best response was to laugh. Hopefully Messrs. Richards, Russell and Bowden met with success on their opening night, but even if they didn’t, at least we can rest assured that the story of the flitch – which took me from eighteenth-century playbill to fourteenth-century manuscript and back – isn’t going anywhere just yet.