Applications of Distributed Version Control Technologies Toward the Creation of 50,000 Digital Scholarly Editions

The British Library maintains a collection of roughly 50,000 digital texts, scanned from public-domain books, most of which were originally published in the 19th century. As scanned books, their text format is Analyzed Layout and Text Object (ALTO) Extensible Markup Language (XML), a verbose markup format created by Optical Character Recognition (OCR) software, and one which is only marginally human-readable. Our project, Git-Lit, converts each text to the plain text format Markdown, creates version-controlled repositories for each using the distributed version control system Git, and posts the repositories to the project management platform GitHub, where they can be edited by anyone. Along the way, websites for each text, optimized for readability, are automatically generated via GitHub Pages. These websites integrate with the annotation platform Hypothes.is, enabling them to be annotated. In this way, Git-Lit aims to make this collection of British Library electronic texts discoverable, readable, editable, annotatable, and downloadable. 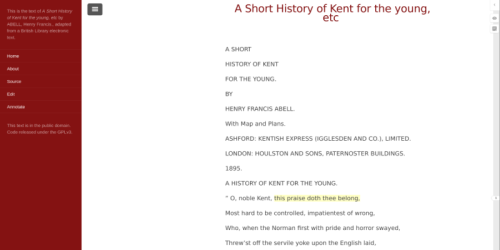 The biggest advantage of using a distributed version control system like Git is that it leverages the kinds of decentralized collaboration workflows that have long been in use in software development. Open-source software and web development, for which Git and GitHub were originally designed, is a much-studied methodology, long proven to be more effective than closed-source methods. Rather than maintain a central silo for serving code and electronic texts, the decentralized approach ensures a plurality of textual versions. Since anyone may copy ("fork") a project, modify it, and create their own version, there is no one central, canonical text, but many. Each version may freely borrow ("pull") from others, request that others integrate their changes ("pull request"), and discuss potential changes ("issues") using the project management subsystems of GitHub. This workflow streamlines collaboration, and encourages external contributions. Furthermore, since each change ("commit") requires a description of the commit, and reasons for it, the Git platform enforces the kind of editorial documentation necessary for scholarly editing. We like to think of git-based editing, therefore, as scholarly editing, and GitHub-based collaboration as a democratization of scholarly editing.

Furthermore, since GitHub allows instant editing of texts in the web browser, it is a simple and intuitive method of crowdsourcing the text cleanup process. Since OCRd texts are often full of errors, GitHub allows any reader to correct an obvious OCR error she or he finds. The analogous process of reporting errors to centralized text repositories like Project Gutenberg has been known to take several years. On GitHub, however, it is instantaneous.

Not the least advantage of this setup is the automated creation of websites from the plain text sources. Not only does this transform the markdown to a clean, readable edition of the text, but it provides integration with the annotation platform Hypothes.is. Hypothes.is allows for social annotation of a text, making it ideal for classroom use. Professors may assign a British Library text as a course reading, and may require their students annotate it, an activity which can generate discussions in the limitless virtual margins of this electronic textual space.

The Git-Lit project has so far posted around 50 texts to GitHub, as prototypes, with the full corpus of roughly 50,000 texts soon to come. After the full corpus is processed in this way, we'll begin enhancing some of the metadata. So far, we have developed techniques for probabilistically inferring the language of each text, and using Ben Schmidt's document vectorization method, Stable Random Projection, we have been able to probabilistically infer Library of Congress classifications, as well. This enables the automatic generation of sub-corpora like PR (British Literature), or PZ (American Literature).

In the coming year, we hope to integrate the Git-Lit transformed British Library texts into a structured database, further enhancing the discoverability of its texts. We have just received a micro-grant from NYC-DH to help launch Corpus-DB, a project also aiming to produce textual corpora, and through Corpus-DB, we will soon create a SQL database containing the metadata, our enhanced and inferred metadata, and other aggregated book data gleaned from public APIs. This will soon allow readers and computational text analysts the ability to download groups of British Library electronic texts. Users interested in downloading, say, all novels set in London, will be able to get a complete full-text dump of all public-domain novels in this category by visiting a URL such as api.corpus-db.org/novels/setting/London. We expect that this will greatly streamline the corpus creation process that takes up so much of the time of a computational text analysis.

Both Git-Lit and Corpus-DB are open-source projects, open to contributions from anyone, regardless of skill. If you'd like to contribute to our project in some way, get in contact with us, and we'll tell you how you can help. 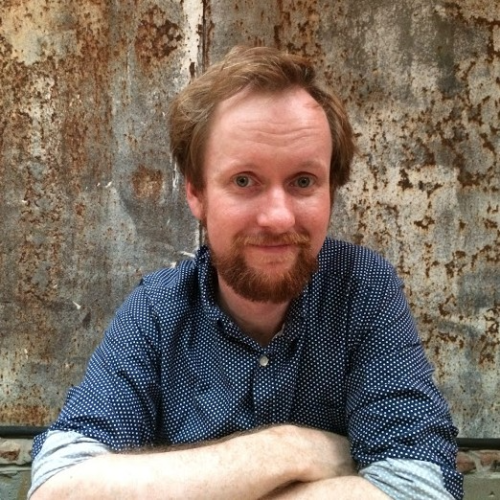 Jonathan Reeve is a third-year graduate student in the Department of English and Comparative Literature at Columbia University, where he specializes in computational literary analysis. Find his recent experiments at jonreeve.com.

Posted by BL Labs on behalf of Jonathan Reeve