Making the British Library’s valuable collection of early Bengali books more accessible to researchers and the general public around the world rests heavily on the collaborative work undertaken across different teams of the library and partners in the UK and abroad. The commitment and passion of the project team has relied on the contribution and expertise of collaborators, as well as the forward thinking vision of the library, partners and fundraisers.

Receiving the BL Labs Staff Award 2017 is a great opportunity to thank everyone involved. 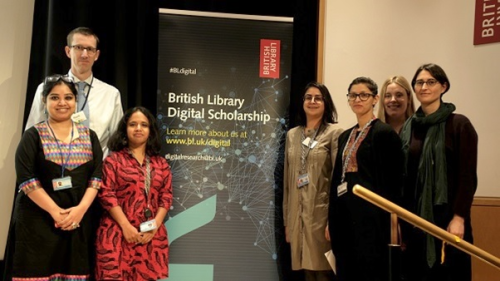 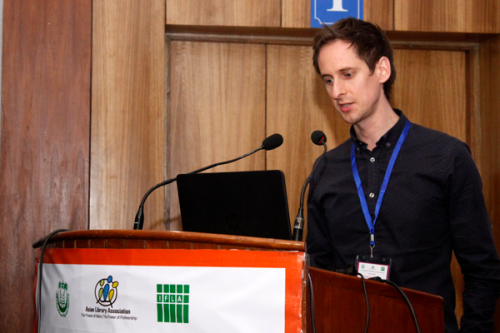 The Two Centuries of Indian Print project is a partnership between the British Library, the School of Cultural Texts and Records (SCTR) at Jadavpur University, Srishti Institute of Art, Design and Technology, and the Library at SOAS University of London, among others. It has also involved collaborations with the National Library of India, and other institutions in India.

The AHRC Newton-Bhabha Fund and the Department for Business, Energy and Industrial Strategy have generously funded the work undertaken so far by the project, focusing on early printed Bengali books. Many are unavailable in other library collections or are extremely difficult to locate and access. The project has undertaken a variety of initiatives from the digitisation of books and enhancement of the catalogue records in English and Bengali, to stimulating the use of digital humanities tools and techniques, running a programme of digital skills sharing and capacity building workshops, and hosting the South Asia Series seminars. All of these initiatives greatly contribute to the discovery and study of the collection. The project is also conducting ground breaking work in finding a solution to Optical Character Recognition (OCR) in Bangla script. OCR is not available for South Asian languages currently and harnessing viable Optical Character Recognition technology would enable full text search of the books, paving the way for researchers to use natural language processing techniques to perform large scale analysis across a large corpus of text covering a diverse range of topics relating to Indian society, religion, and politics to name but a few. Doing so will increase the possibilities for new discoveries in this academic field.

However, despite its status as one of the most widely spoken languages in the world, Bangla script has been greatly underserved by providers of OCR solutions. This is due in part to the orthographical and typographical variances that have taken place in recent centuries that make building a dictionary and character ‘classifier’ more challenging. Due to the wide date range of the books we are digitising, these issues affect the quality of OCR. The physical condition of our historical books, including faded text, presents additional difficulties for creating machine readable versions of the books.

To overcome these obstacles, the project team has been advancing the development of OCR for Bangla through the organisation of an international competition which reviewed the state-of-the-art in commercial and open source text recognition tools. The results of the competition will be announced at the ICDAR 2017 conference in Kyoto later this month. Watch this space! The competition dataset has been made openly available for download and reuse for any researchers or institutions who would like to experiment with OCR for Bengali. 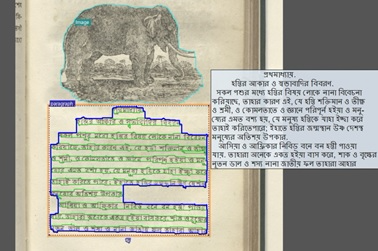 A page from the Animal Biographies, VT 1712 showing its transcription produced for the ICDAR 2017 competition

The project has organised two Skills Exchange Programmes, hosting mid-career Library professionals from the the National Library of India at the British Library for a week, providing a packed programme of tours and talks from all areas of the Library. The project has also conducted digital skills sharing and capacity building workshops for library professionals and archivists from cultural heritage institutions in India. The first workshop took place at Jadavpur University, Kolkata, in December 2016. Library and information professionals from cultural heritage institutions in Bengal took part in a one-day event to learn more about how information technology is transforming humanities research today and in turn Library services, as well as the methods for interrogating humanities-related datasets.

Afterthe success of this first workshop another event was held in July 2017, at which more than 30 library professionals discussed OCR developments for Bangla, trying out different tools and discussing digital scholarship techniques and projects. Most recently, the project’s digital curator facilitated a workshop around Digitisation Standards at the International Conference of Asian Libraries in Delhi. The workshops continue in earnest in the new year with another digital humanities skills workshop planned for January 2018 to be held in partnership with the Srishti Institute of Art, Design, and Technology. 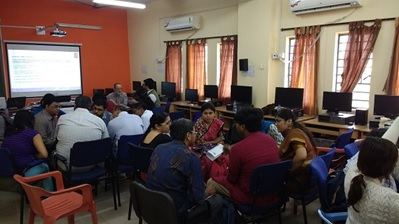 The Project Team also held a two day Academic Symposium on South Asian book history at Jadavpur University in the summer, with 17 speakers from India, wider South Asia, and the UK. Attendance was between 50-70 people a day and feedback was very good.  We plan to have a publication arising from this Symposium, and to upload a video to our project webspace. The project also hosts a popular series of talks based around the Two Centuries of Indian Print project and the British Library’s South Asia collections. The seminars take place fortnightly at the British Library. So far we have hosted a range of academics and researchers, from PhD students to senior academics from the UK and abroad, who share cutting-edge research with discussion chaired by curators and specialists in the field. The seminars have been a great success attracting large attendances and speakers from around the world. We also host a number of show and tells of our material to raise awareness for our collection and to engage in community outreach.

Everyone on the project is thrilled to have won this award and we will be working hard in 2018 to continue bringing the Two Centuries of Indian Print project to the attention and use of researchers and the general public.

Submit a project for one of the BL Labs 2018 Awards! Join us on 12 November 2018 for the BL Labs annual Symposium at the British Library.

Posted by BL Labs on behalf of The Two Centuries of Indian Print team.