The 19th Century British Library Newspapers Database offers a rich mine of material to be sourced for a comprehensive view of British life in the nineteenth and early twentieth century. The online archive comprises 101 full-text titles of local, regional, and national newspapers across the UK and Ireland, and thanks to optical character recognition, they are all fully searchable. This allows for extensive data mining across several millions worth of newspaper pages. It’s like going through the proverbial haystack looking for the equally proverbial needle, but with a magnet in hand.

For my current research project on the role of the radio during the British Raj, I wanted to find out more about Sir Jagadis Chandra Bose (1858–1937), whose contributions to the invention of wireless telegraphy were hardly acknowledged during his lifetime and all but forgotten during the twentieth century. The person who is generally credited with having invented the radio is Guglielmo Marconi (1874–1937). In 1909, he and Karl Ferdinand Braun (1850–1918) were awarded the Nobel Prize in Physics “in recognition of their contributions to the development of wireless telegraphy”. What is generally not known is that almost ten years before that, Bose invented a coherer that would prove to be crucial for Marconi’s successful attempt at wireless telegraphy across the Atlantic in 1901. Bose never patented his invention, and Marconi reaped all the glory.

In his book Jagadis Chandra Bose and the Indian Response to Western Science, Subrata Dasgupta gives us four reasons as to why Bose’s contributions to radiotelegraphy have been largely forgotten in the West throughout the twentieth century. The first reason, according to Dasgupta, is that Bose changed research interest around 1900. Instead of continuing and focusing his work on wireless telegraphy, Bose became interested in the physiology of plants and the similarities between inorganic and living matter in their responses to external stimuli. Bose’s name thus lost currency in his former field of study.

A second reason that contributed to the erasure of Bose’s name is that he did not leave a legacy in the form of students. He did not, as Dasgupta puts it, “found a school of radio research” that could promote his name despite his personal absence from the field. Also, and thirdly, Bose sought no monetary gain from his inventions and only patented one of his several inventions. Had he done so, chances are that his name would have echoed loudly through the century, just as Marconi’s has done.

“Finally”, Dasgupta writes, “one cannot ignore the ‘Indian factor’”. Dasgupta wonders how seriously the scientific western elite really took Bose, who was the “outsider”, the “marginal man”, the “lone Indian in the hurly-burly of western scientific technology”. And he wonders how this affected “the seriousness with which others who came later would judge his significance in the annals of wireless telegraphy”.

And this is where the BL’s online archive of nineteenth-century newspapers comes in. Looking at newspaper coverage about Bose in the British press at the time suggests that Bose’s contributions to wireless telegraphy were soon to be all but forgotten during his lifetime. When Bose died in 1937, Reuters Calcutta put out a press release that was reprinted in several British newspapers. As an example, the following notice was published in the Derby Evening Telegraph of November 23rd, 1937, on Bose’s death: 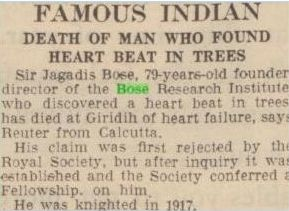 Notice in the Derby Evening Telegraph of November 23rd, 1937

The Derby Evening Telegraph is not alone in this act of partial remembrance. Similar articles appeared in Dundee’s Evening Telegraph and Post and The Gloucestershire Echo on the same day. The Aberdeen Press and Journal published a slightly extended version of the Reuters press release on November 24th that includes a brief account of a lecture by Bose in Whitehall in 1929, during which Bose demonstrated “that plants shudder when struck, writhe in the agonies of death, get drunk, and are revived by medicine”. However, there is again no mention of Bose’s work as a physicist or of his contributions to wireless telegraphy. The same is true for obituaries published in The Nottingham Evening Post on November 23rd, The Western Daily Press and Bristol Mirror on November 24th, another article published in the Aberdeen Press and Journal on November 26th, and two articles published in The Manchester Guardian on November 24th.

The exception to the rule is the obituary published in The Times on November 24th. Granted, with a total of 1116 words it is significantly longer than the Reuters press release, but this is also partly the point, as it allows for a much more comprehensive account of Bose’s life and achievements. But even if we only take the first two sentences of The Times obituary, which roughly add up to the word count of the Reuters press release, we are already presented with a different account altogether:

“Our Calcutta Correspondent telegraphs that Sir Jagadis Chandra Bose, F.R.S., died at Giridih, Bengal, yesterday, having nearly reached the age of 79. The reputation he won by persistent investigation and experiment as a physicist was extended to the general public in the Western world, which he frequently visited, by his remarkable gifts as a lecturer, and by the popular appeal of many of his demonstrations.”

We know that he was a physicist; the focus is on his skills as a researcher and on his talents as a lecturer rather than on his Western titles and honours, which are mentioned in passing as titles to his name; and we immediately get a sense of the significance of his work within the scientific community and for the general public. And later on in the article, it is finally acknowledged that Bose “designed an instrument identical in principle with the 'coherer' subsequently used in all systems of wireless communication. Another early invention was an instrument for verifying the laws of refraction, reflection, and polarization of electric waves. These instruments were demonstrated on the occasion of his first appearance before the British Association at the 1896 meeting at Liverpool”.

Posted by BL Labs on behalf of Dr Christin Hoene, a BL Labs Researcher in Residence at the British Library. Dr Hoene is a Leverhulme Early Career Fellow in English Literature at the University of Kent.

If you are interested in working with the British Library's digital collections, why not come along to one of our events that we are holding at universities around the UK this year? We will be holding a roadshow at the University of Kent on 25 April 2018. You can see a programme for the day and book your place through this Eventbrite page.