As the final months of the Ambient Literature project approach, the research team are convening a series of final events (more on which below), but are also spending time drawing out conclusions and reflections regarding the last two years of work. Below is a guest post discussing this by Tom Abba from the Ambient Literature project and the University of the West of England, you can  follow him on twitter as @tomabba:

When we began in May 2016, we were upfront about the challenges of the work we were going to make and address. Here’s what we said at the launch event at Hachette’s (then shiny new) headquarters in Blackfriars:

Here’s an admission at the start of a research programme:

We don’t know what Ambient Literature is.

We’ve started to map the territory, to define by identifying borders and by testing the edges. It’s important to note though, that we don’t want to reduce the idea to something tight and defined, rather our intention is to open it up, so show by doing, making and thinking. We do know that Ambient Literature asks for writing to be specific, to be for this form. That there are rules, grammars of making and thinking about readers and texts in new ways.

Twenty three months later, I think we know what this is, and we’ve made progress toward a set of rules and grammars for making work in this form. Each of our three commissions demonstrates how Ambient Literature might work, and each does so in a completely different way. Duncan Speakman’s It Must Have Been Dark By Then, James Attlee’s The Cartographer’s Confession and Kate Pullinger’s Breathe (made with Editions at Play) ask something of their audience that is particular to the decisions each writer made, how those were translated into a technologically mediated form, and the goals at the heart of each of those works. In different ways, for different reasons, we’re very proud of each of them. 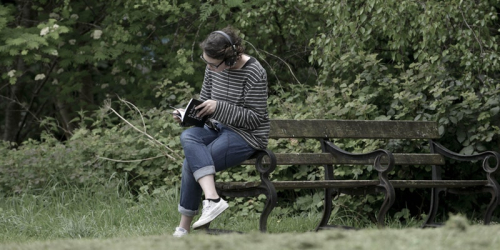 Ambient Literature has been an extended conversation about storytelling, situation, audience, presence and much much more. We opened that conversation up last year at our half-way Symposium, and want to take it much further now. We want to show, and to talk to you all, and celebrate everything that’s been part of this journey. If you’re interested in being part of that conversation and celebration, then our Showcase Festival takes place on 23rd April at the British Library Conference Centre. We’ll be sharing our secrets and discoveries, and letting you look behind the scenes at how each of our projects were created. The event will feature workshops with Duncan Speakman and Kate Pullinger and talks, as well as a guided tour through the London of The Cartographer’s Confession with its author James Attlee and producer Emma Whittaker. We’re aiming the event at publishing industry professionals, students and practitioners, as well as anyone interested in the future of reading and writing. We can promise at the very least you’ll come away knowing something new about digital storytelling. If you would like to attend please register here and book places on to the workshops.

We’re also taking the whole project to the Hay Festival in May. We’re running workshops, hosting a panel discussion (with guests including Dan Franklin and Joanna Walsh) and are making a new piece of work - Words We Never Wrote - specially for Hay. It premieres at the Festival and explores the meaning of writing, language and storytelling. We’re incredibly proud of this piece - it asks questions about linearity and form, art and suggestion that we’ve been aching to address for years. We’re delighted to be at Hay and, if you want to join us there, we can promise you a little bit of magic when you visit.