Gaming the Gothic on Friday the 13th

“The bats have left the bell tower, the victims have been bled”  - Happy Friday the 13th to those of you with gothic sensibilities! I’ve been enjoying singing along to the wonderful CHVRCHES cover of “Bela Lugosi’s Dead” originally by Bauhaus, while preparing for the Gaming the Gothic conference, which takes place at the University of Sheffield today, and where @GamingTheGothic have promised both cake and badges!

I am giving a paper on the Off the Map videogame design competition, which accompanied the British Library’s exhibition ‘Terror and Wonder: The Gothic Imagination’, which in 2014 celebrated 250 years of gothic literature and culture, starting from the publication of Horace Walpole’s The Castle of Otranto.

The Off The Map competition challenged higher education students based in the UK to create videogames inspired by the British Library’s collections and in 2014 three students from University of South Wales created a winning underwater game where the player rebuilds Fonthill Abbey, the once-stunning Gothic revival country house in Wiltshire home to author William Beckford, which was demolished in 1846 after the collapse of its spectacular 300-foot tower twenty years earlier. 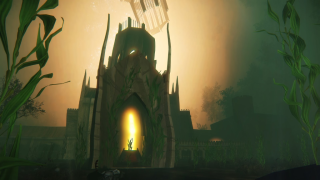 Image from 2014 Off the Map winning game Nix 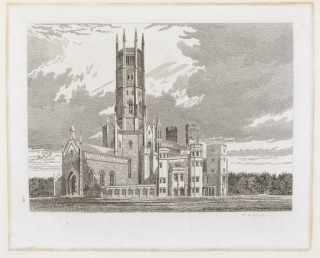 The winning team used images, maps of the estate and sounds held in the British Library’s collections to create Nix; a game for the first generation Oculus Rift, a revolutionary virtual reality headset for 3D gaming. Tim Pye, curator of the British Library’s exhibition Terror and Wonder, said this about their entry:

“What is so impressive about the Nix game is the way in which it takes the stunning architecture of the Abbey, combines it with elements from its troubled history and infuses it all with a very ghostly air. The game succeeds in transforming William Beckford’s stupendously Gothic building into a magical, mysterious place reminiscent of the best Gothic novels.”

Keeping the gothic flames burning in 2018 and to mark the 200th year anniversary of the publication of Frankenstein, the British Library’s Digital Scholarship team is pleased to be collaborating on Gothic Novel Jam with Read Watch Play; an online reading group that has monthly themes. Last year we partnered on Odyssey Jam and it was inspiring to see the end results, which I blogged about here.

To get involved in Gothic Novel Jam participants need to make something creative inspired by the gothic novel genre. Then by the 31st July upload or share it on the itch.io Gothic Novel Jam site. Entries can include stories, poetry, art, games, music, films, pictures, soundscapes, or any other type of digital media response. 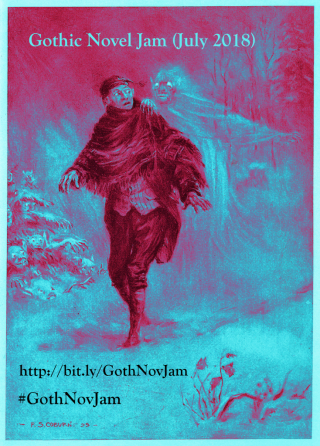 As part of the jam we want participants to use images from the British Library Flickr account as inspiration for submissions. They’re freely available for anyone to use and the following albums may be particularly inspiring:

However, don't feel limited to using just those images, the full list of albums can be found here. There are also the Off the Map Gothic Collections of images on Wikimedia Commons and sounds on SoundCloud, which you are free to use. If you want to learn more about the gothic genre and it's authors, check out this hugely informative section of the Discovering Literature website.

Although the gothic novel is the main jam theme, we’ll also be announcing a sub-theme on the 1st July, so please follow the #GothNovJam hashtag on social media for more news and also to see what others are creating for the jam. Good luck and have fun! 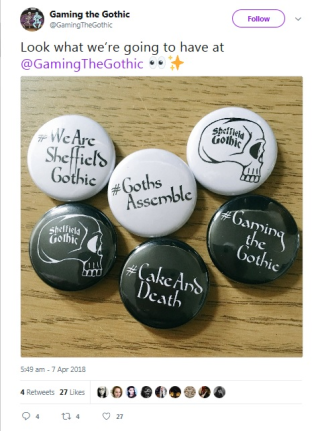 Button badges made for the Gaming the Gothic conference, really hope I get a #CakeAndDeath one!

Posted by Digital Research Team at 1:29 AM