Get Involved in the Gothic Novel Jam

On the previous Friday the 13th in April, I blogged about the Gaming the Gothic conference, at the University of Sheffield and also shared news that the British Library’s Digital Scholarship team is collaborating on a Gothic Novel Jam with online reading group Read Watch Play during July. Well we are now almost two weeks into the jam and it is great to see people working on their entries by following #GothNovJam and checking the itch.io submission feed. 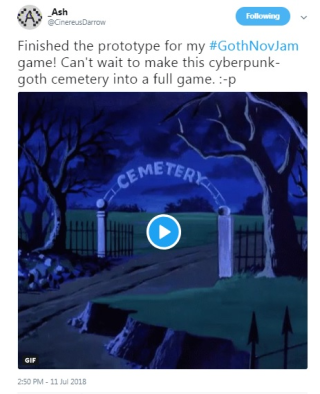 If you would like to make an entry for the jam, you still have 19 days left to create something amazing! As the deadline for uploading submissions to the site is the end of 31st July 2018.

As a reminder, it’s an online creative challenge with a gothic novel theme and it’s open to anyone around the world to participate in. Participants are encouraged to create a whole variety of works on their own or as part of a team. Even though the theme is the gothic novel, you don’t have to limit yourselves to a written submission. Writers, musicians, game makers, artists, crafters, makers of all ages and abilities have signed up from around the world and we are anticipating contributions in all of these areas. Furthermore, submissions don’t have to be limited to these forms. Let your imagination go wild. If you want to bake a cake that looks like a Hound of the Baskerville – go for it! Or you want to make an origami Frankenstein – go for it! Or maybe even a knitted map of Transylvania – go for it! Contribute in whatever way you want to. All we ask is that you have something that you can upload to the official host page at itch.io. Digital works can be uploaded and for physical objects, such as a cake, you could take a photo or video and upload this to the site instead. You’ll retain the copyright of anything you upload. If you haven’t signed up yet, don’t worry you can sign up until the last day. 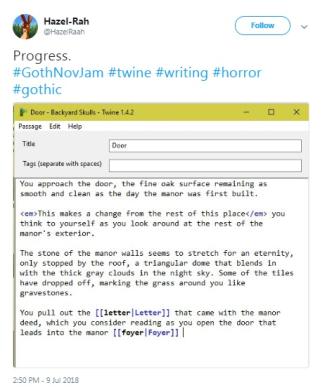 Tweet by @HazelRaah about an entry made with twine

As we mentioned, the main theme is the gothic novel, but there is also a sub-theme “The monster within”, which was selected from a shortlist of themes suggested and voted on by the jam participants.

We would love participants to use images from the British Library Flickr account as inspiration for submissions. They’re freely available for anyone to use and the following albums may be particularly inspiring:

However, don't feel limited to using just those images, the full list of albums can be found here. There are also the Off the Map Gothic Collections of images on Wikimedia Commons and sounds on SoundCloud, which you are free to use. If you want to learn more about the gothic genre and it's authors, check out this hugely informative section of the Discovering Literature website.

If all this talk of jams has whetted your appetite for writing interactive fiction, then you may be interested in attending the Infinite Journeys: Interactive Fiction Summer School booking details are here.  It runs for five days, beginning Monday 23 July and ending on Friday 27 July.

Also later in the year, on 10-11 November, we are delighted to be hosting the popular Narrative Games Convention AdventureX for International Games Week in Libraries. They currently have a call, which invites people to apply to speak, demo their narrative games, or volunteer. So if you have made an epic #GothNovJam narrative game, then do consider applying to showcase it at AdventureX. Good luck!

This post is by Digital Curator Stella Wisdom (@miss_wisdom) and Gary Green (@ggnewed) from Surrey Libraries.