Popular plays: titles and dramatists from In the Spotlight

Beatrice Ashton-Lelliott is a PhD researcher at the University of Portsmouth studying the presentation of nineteenth-century magicians in biographies, literature, and the popular press. She is currently a research placement student on the British Library’s In the Spotlight project, cleaning and contextualising the crowdsourced playbills data. She can be found on Twitter at @beeashlell and you can join the In the Spotlight project at playbills.libcrowds.com.

In this blogpost I discuss the data crowdsourced so far by the In the Spotlight project – which has already thrown out quite a few surprises along the way! As for my first post, Crowdsourcing comedy: date and genre results from In the Spotlight, the data which I discuss was cleaned using OpenRefine, and I have organised some terms (like genre) into categories. In this second post, I cover the most notable results to come out of the titles tasks, and my own research into the playwrights behind the most popular plays.

To me, these results were some of the most exciting of all. Titles had their own difficulties though – many feature ‘scenes’ from plays, and the question as to whether these count as performances or not is one which has cropped up frequently. In the end I decided to include all of them to show a wider variety and made a simple chart of the top ten most popular plays, then posted it to the project forum to see if any contributors were surprised by the results. Speaking for myself, there are a couple in the top ten that are no surprise: Shakespeares, Black-Eyed Susan, Aladdin etc., but the top five are definitely the most interesting!

What I find most notable of all is the fact that plays such as Kenilworth: Or, England's Golden Days are practically unheard of today and have little documentation even from the contemporary time period, yet clearly enjoyed a high degree of popularity, at least among the site's volumes. One of the most interesting aspects of this project for me is trying to find out why some plays have lasted in terms of performance popularity more than others, and looking at this titles data seemed to be the best place to start. The most popular play from this sample was Tom & Jerry: Or, Life in London, which as a contributor helpfully added on Twitter was also apparently very popular in America, so a trans-Atlantic success! 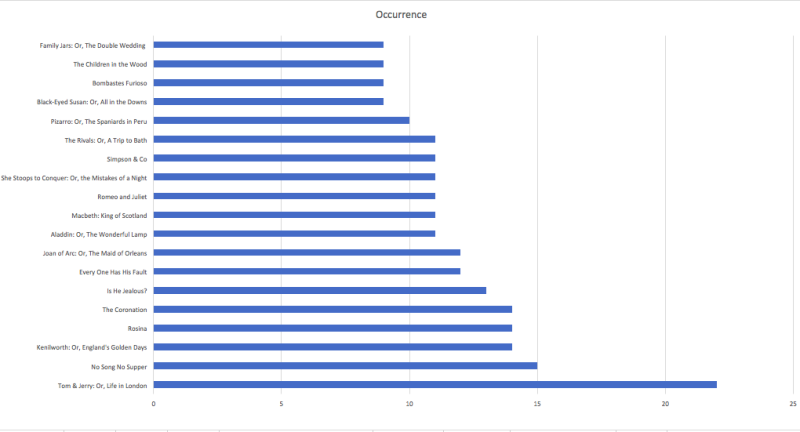 A graph of the most popular play titles

This chart was, however, made before I’d carried out the task I focus on in the next section – finding playwrights for all of the plays. That process helped to sort out which were ‘real’ plays and which were just events or random words highlighted by the contributors on the site. So for instance, 'The Coronation' which appears in the top ten is a prime example of something that's 'not a title' -- denoting some other kind of 'coronation' performance instead.

After realising that I was having to slog through a lot of playbills containing the word ‘love’, I created a Wordcloud of the most used words in the play titles  As expected, 'love' is up there as one of the big ones, but a lot of the focus is on similar but slightly more domestic themes, such as 'man' and 'wife'. I'd like to think that this gives us a bit of an insight into the hottest topics of the late eighteenth and early nineteenth centuries! 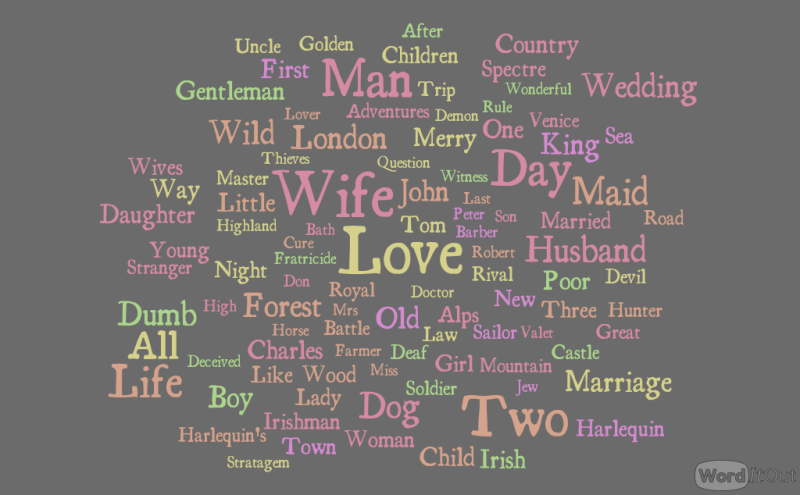 A Wordcloud showing the most popular words in the titles

The next step was to create a spreadsheet matching the plays to their original playwrights. At the moment, I'm focusing on adding to this sheet by finding links to reviews of individual performances and digitised copies of the plays. To create the initial playwrights draft dataset I used sources including Archive.org, Oxford Dictionary of National Biography, Victorian Popular Culture, Worldcat, Miranda, Open Library, the John Johnson collection, Google Books and Allardyce Nicoll’s brilliant tomes A History of English Drama, 1660-1900 (Cambridge: University Press, 1952) and A History of Early Nineteenth Century Drama, 1800-1850 (Cambridge: University Press, 1930). As I thought the best results would come from me manually researching each title using these sources, you can imagine it's been quite time-consuming! The results hopefully, however, provide a good basis for us to compare future titles to and so won’t have to be done in such a large batch again, as a lot of the same playwrights and plays reoccur throughout the century. I've made a few charts of the most prolific playwrights, and am planning blogs on the more 'interesting' characters, as some of them certainly had exciting lives! It was also great to see some (very minor!) variety in a female playwright -- Elizabeth Inchbald (née Simpson) -- making the top ten. 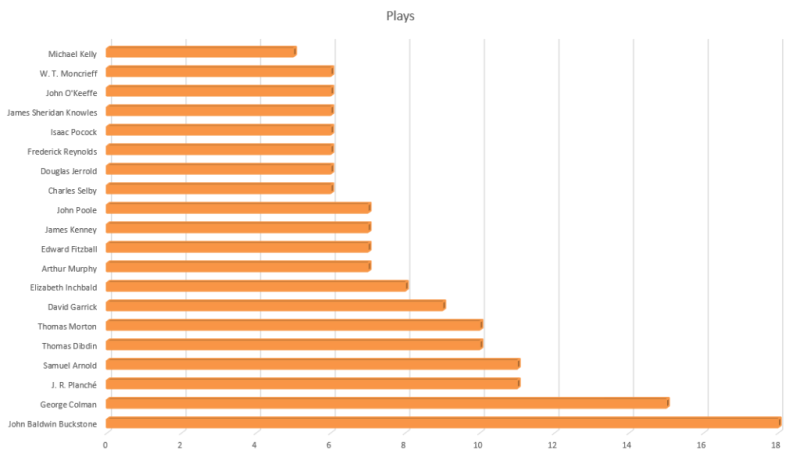 Having finished sorting out which of the remaining ‘mystery’ titles were not actually plays at all, and so would have no playwright, I’m left with about ten titles that I've not been able to crack yet, so I’m sharing them on the In the Spotlight forum and Twitter in the hopes that someone out there will have some more information.

Another point to make about the experience of researching each of the play's dramatists is that some of the more tricky ones to find have often actually turned out to be by famous/popular playwrights in the end, rather than obscure figures. Perhaps contemporary audiences would have been automatically assumed to know which playwright had done which play, and so it was unnecessary to announce it on the playbill? I also made a (very simple!) visualisation of with the portraits of the top ten playwrights, to help put a face to a name in eighteenth century style! 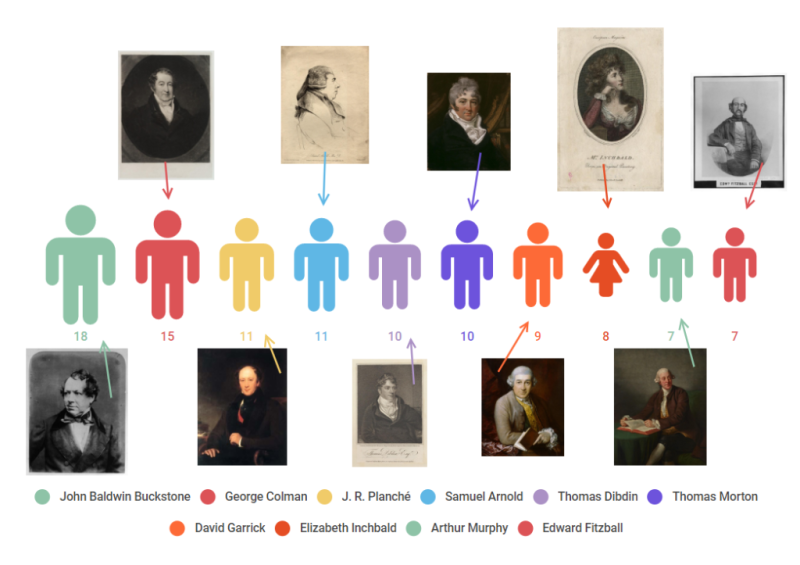 Portraits of the top ten most popular playwrights

I'm looking forward to getting stuck into research into reviews of the performances listed in the volumes, especially as these are often of great contemporary comedy value. For instance, the newly added Portsmouth volumes focus on a theatre once described by Charles Dickens in Nicholas Nickleby (1839) as containing 'bare walls, dusty scenes, mildewed clouds, heavily daubed draperies, and dirty floors [...] ceiling, pit, boxes, gallery, orchestra, fittings, and decorations of every kind, - all looked coarse, cold, gloomy, and wretched' (p. 281) -- hopefully there will be slightly more generous reactions out there somewhere!

How can you help?

If these posts have piqued your interest, you can help the In the Spotlight project in a few different ways, depending on your interest. You can mark out and transcribe dates, play titles and genres at http://playbills.libcrowds.com, or join in the conversations about playwrights, titles and more on the project forum, https://community.libcrowds.com/t/in-the-spotlight.

Posted by Digital Research Team at 11:50 AM