Image taken from page 203 of '[Griffith's new historical description of Cheltenham and its vicinity ... with ... engravings. L.P.]'

The BL Labs team are pleased to announce that the sixth annual British Library Labs Symposium will be held on Monday 12 November 2018, from 9:30 - 17:30 in the British Library Knowledge Centre, St Pancras. The event is free, and you must book a ticket in advance. Last year's event was a sell out, so don't miss out!

The Symposium showcases innovative and inspiring projects which use the British Library’s digital content, providing a platform for development, networking and debate in the Digital Scholarship field as well as being a focus on the creative reuse of digital collections and data in the cultural heritage sector.

We are very proud to announce that this year's keynote will be delivered by Daniel Pett, Head of Digital and IT at the Fitzwilliam Museum, University of Cambridge.

Dan's keynote will reflect on his years of experience in assessing the value, impact and importance of experimenting with, re-imagining and re-mixing cultural heritage digital collections in Galleries, Libraries, Archives and Museums. Dan will follow in the footsteps of previous prestigious BL Labs keynote speakers: Josie Fraser (2017); Melissa Terras (2016); David De Roure and George Oates (2015); Tim Hitchcock (2014); and Bill Thompson and Andrew Prescott in 2013.

Stella Wisdom (Digital Curator for Contemporary British Collections at the British Library) will give an update on some exciting and innovative projects she and other colleagues have been working on within Digital Scholarship. Mia Ridge (Digital Curator for Western Heritage Collections at the British Library) will talk about a major and ambitious data science/digital humanities project 'Living with Machines' the British Library is about to embark upon, in collaboration with the Alan Turing Institute for data science and artificial intelligence.Throughout the day, there will be several announcements and presentations from nominated and winning projects for the BL Labs Awards 2018, which recognise work that have used the British Library’s digital content in four areas: Research, Artistic, Commercial, and Educational. The closing date for the BL Labs Awards is 11 October, 2018, so it's not too late to nominate someone/a team, or enter your own project! There will also be a chance to find out who has been nominated and recognised for the British Library Staff Award 2018 which showcases the work of an outstanding individual (or team) at the British Library who has worked creatively and originally with the British Library's digital collections and data (nominations close 12 October 2018).

Adam Farquhar (Head of Digital Scholarship at the British Library) will give an update about the future of BL Labs and report on a special event held in September 2018 for invited attendees from National, State, University and Public Libraries and Institutions around the world, where they were able to share best practices in building 'labs style environments' for their institutions' digital collections and data.

There will be a 'sneak peek' of an art exhibition in development entitled 'Imaginary Cities' by the visual artist and researcher Michael Takeo Magruder. His practice  draws upon working with information systems such as live and algorithmically generated data, 3D printing and virtual reality and combining modern / traditional techniques such as gold / silver gilding and etching. Michael's exhibition will build on the work he has been doing with BL Labs over the last few years using digitised 18th and 19th century urban maps bringing analog and digital outputs together. The exhibition will be staged in the British Library's entrance hall in April and May 2019 and will be free to visit.

Finally, we have an inspiring talk lined up to round the day off (more information about this will be announced soon), and - as is our tradition - the symposium will conclude with a reception at which delegates and staff can mingle and network over a drink and nibbles.

So book your place for the Symposium today and we look forward to seeing new faces and meeting old friends again! 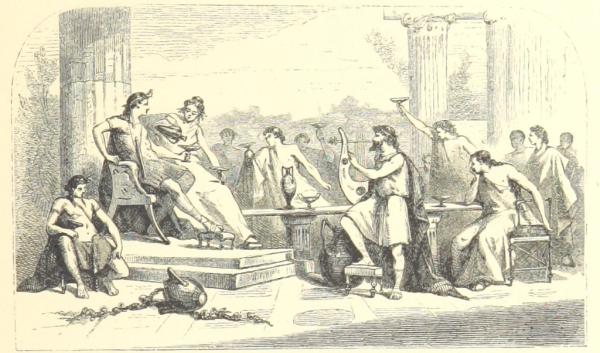 Image taken from page 99 of 'Festival of Song: a series of Evenings with the Poets. Prepared by the author of “Salad for the Solitary” ... (F. Saunders). With ... pictures by Members of the National Academy of Design. Engraved by Bobbett and Hooper'