The Parts of a Playbill

Beatrice Ashton-Lelliott is a PhD researcher at the University of Portsmouth studying the presentation of nineteenth-century magicians in biographies, literature, and the popular press. She is currently a research placement student on the British Library’s In the Spotlight project, cleaning and contextualising the crowdsourced playbills data. She can be found on Twitter at @beeashlell and you can help out with In the Spotlight at playbills.libcrowds.com.

In the Spotlight is a brilliant tool for spotting variations between playbills across the eighteenth and nineteenth centuries. The site provides participants with access to thousands of digitised playbills, and the sheets of the playbills in the site’s collections often have lists of the cast, scenes, and any innovative ‘machinery’ involved in the production. Whilst the most famous actors obviously needed to be emphasised and drew more crowds (e.g., any playbills featuring Mr Kean tend to have his name in huge letters), from the playbills in In the Spotlight’s volumes that doesn’t always seem to be the case with playwrights. Sometimes they’re mentioned by name, but in many cases famous playwrights aren't named on the playbill. I’ve speculated previously that this is because these playwrights were so famous that perhaps audiences would hear by word of mouth or press that a new play was out by them, so it was assumed that there was no point in adding the name as audiences would already know?

What can you expect to see on a playbill?

The basics of a playbill are: the main title of the performance, a subtitle, often the current date, future or past dates of performances, the cast and characters, scenery, short or long summaries of the scenes to be acted, whether the performance is to benefit anyone, and where tickets can be bought from. There are definitely surprises though: the In the Spotlight team have also come across apologies from theatre managers for actors who were scheduled to perform not turning up, or performing drunk! The project forum has a thread for interesting things 'spotted on In the Spotlight', and we always welcome posts from others.

Crowds would often react negatively if the scheduled performers weren’t on stage. Gilli Bush-Bailey also notes in The Performing Century (2007) that crowds would be used to seeing the same minor actors reappear across several parts of the performance and playbills, stating that ‘playbills show that only the lesser actors and actresses in the company appear in both the main piece and the following farce or afterpiece’ (p. 185), with bigger names at theatres royal committing only to either a tragic or comic performance.

From our late 18th century playbills on the site, users can see quite a standard format in structure and font. 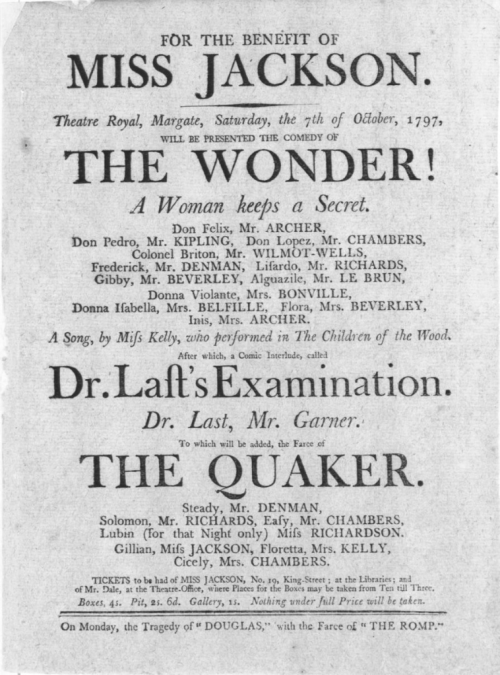 In this 1797 playbill from the Margate volume, the font is uniform, with variations in size to emphasise names and performance titles.

How did playbills change over time?

In the 19th century, all kinds of new and exciting fonts are introduced, as well as more experimentation in the structuring of playbills. The type of performance also influences the layout of the playbill, for instance, a circus playbill be often be divided into a grid-like structure to describe each act and feature illustrations, and early magician playbills often change orientation half-way down the playbill to give more space to describe their tricks and stage.

This 1834 Birmingham playbill is much lengthier than the previous example, showing a variety of fonts and featuring more densely packed text. Although this may look more like an information overload, the mix of fonts and variations in size still make the main points of the playbill eye-catching to passersby.

James Gregory’s ‘Parody Playbills’ article, stimulated by the In the Spotlight project, contains a lot of great examples and further insights into the deeper meaning of playbills and their structure.

Gregory, J. (2018) ‘Parody Playbills: The Politics of the Playbill in Britain in the Eighteenth and Nineteenth Centuries’ in eBLJ.