The BL/QFP is digitising archive material related to Persian Gulf History as well as Arabic scientific manuscripts, in the past four years we have added in excess of 1.5 million images to the Qatar Digital Library. Our team of ~45 staff includes a group of eight dedicated imaging professionals, who between them produce 30,000 digitised images each month, to exacting standards that focus on presenting the information on the page in a visually clear and consistent manner.

Our imaging team are a highly-skilled group, with a variety of backgrounds, experiences and talents, and we wished to harness these. Therefore, we decided to set aside a day for our Imaging team to use their creative and technical skills to ‘hack’ the material in our collection.

By dedicating a whole day for our imaging team to experiment with different ways of capturing the material we are digitising we hoped it would reveal some interesting aspects of the collection, which were not seen through our standardised capture process. It also gave the Imaging team a chance to show off and share their skills amongst themselves and the wider BL/QFP team.

This was how we conceived of our first Imaging Hack Day, and the rest of this blog post outlines how we promoted and organised it.

From its conception the Imaging team were keen for the wider team to be involved, so we asked them to nominate material from the collections we are digitising that they thought could be ‘hacked’ and to state their reasons why. The impact of the posters and presentation was really pronounced. After having a handful of nominations from people outside of the Imaging team before 9th Oct, within days the number had increased by a factor in excess of five (see graph below). The posters also became highly sought after amongst the team. 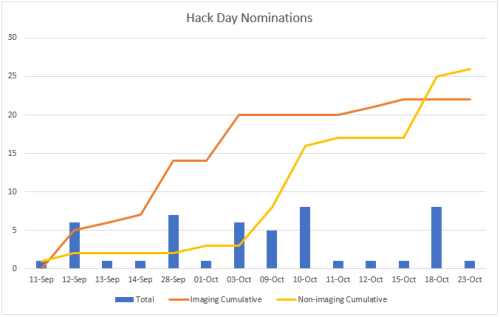 Graph showing how many shelfmarks were nominated each day, with cumulative totals for members of the imaging team vs non-imaging teams.

The day before the Hack Day, anyone who had nominated an item was invited to a prep session with the Imaging team. Here the nominated items were presented, as well as the ideas for hacks. Extra judicious use of Post-Its and Sharpies facilitated feedback, and by the end of the session the Imaging team were armed with lots of ideas, encouragement, and knew they had curatorial expertise from the rest of the BL/QFP team to call upon if necessary.

As a final surprise, and a sign of appreciation Hack Sacks filled with goodies were secreted into the imaging studio late on the eve of the Hack Day: 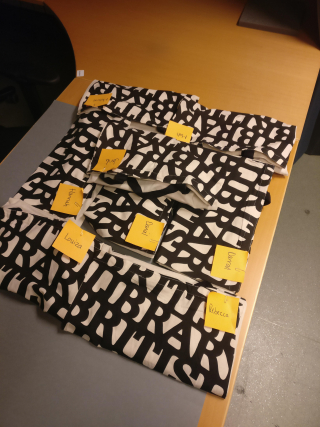 The resulting images/hacks of the Hack Day will be covered in an upcoming post by our studio manager Renata Kaminska. However, in addition the non-material results were manifold. Throughout the lead-up and on the actual day there was a palpable buzz amongst the Imaging team, evidence of the positive impact on their morale. It also led to a greater exchange of knowledge between the Imaging team and their colleagues throughout the BL/QFP. The day allowed for different areas of the team to come together, combine their expertise and find new ways of working and innovative ways of capturing our collections. Finally, it also demonstrated the fantastic experience and skills of our imaging technicians, many of which had not previously been exposed to the rest of the team. It was a real celebration of both the material that we are digitising and our talented imaging studio.

This is a guest post by Sotirios Alpanis, Head of Digital Operations for the British Library's Qatar Project, on Twitter as @SotiriosAlpanis