The Delius Catalogue of Works is a new, freely accessible digital catalogue of the complete works of Frederick Delius (1862-1934).

The Delius Catalogue (DCW) was created as part of a project called ‘Delius, Modernism, and the Sound of Place’ (https://deliusmodernism.wordpress.com), a collaboration between the University of Oxford, the British Library, and the Royal Library, Denmark, which was funded by the Arts and Humanities Research Council. The project as a whole sought to better understand Delius and his music. Delius has been understood as an English portraitist, someone who wrote impressionistic works depicting natural scenes, whose music was strongly linked to the English landscape, and who had little interest in large-scale musical construction or in the details of performance.

However, Delius also lived and wrote music all over the world (in Scandinavia, Florida, Germany and France), and was the friend of many important modern artists, writers and musicians including Edvard Grieg, Edvard Munch, August Strindberg and Paul Gauguin. He also left behind very substantial sketches and other manuscripts that help us to understand his music, the vast majority of which are in the British Library.

Within the project, our aim in creating the DCW was to make a clear and up-to-date catalogue of Delius’s works which was both of a high scholarly standard and accessible to a variety of users (such as scholars, performers and students). We also wanted to integrate the catalogue as far as possible with the British Library’s own manuscript catalogue, to showcase the Library’s Delius collections and enable users of the catalogue to understand and have access to the physical manuscripts. This was a challenge both in terms of research (collecting and presenting information in a clear and concise manner) and web design (presenting it in the best possible manner).

Creating the catalogue was greatly helped by the decision to use MerMEId (Metadata Editor and Repository for MEI Data), specialist software created by Axel Teich Geertinger and his team at the Royal Library, Denmark, originally for creating a catalogue of the works of Carl Nielsen (http://www.kb.dk/dcm/cnw/navigation.xq). MerMEId is built on an eXist XML database with Lucene-based searching, and most of its functionality is implemented using xquery and xslt.

The core catalogue data is stored as MEI, an XML-based standard for the encoding and markup of musical data, inspired by TEI for text. MerMEId’s combination of open-source, standards-based technologies gave great flexibility to customise both the data model and the user interface to suit the application. In the DCW, we adapted genre categories, improved site accessibility, and adapted things like instrumental abbreviations and references to Delius reference works for our purposes. We also adapted the conceptual cataloguing model FRBR (https://www.ifla.org/files/assets/cataloguing/frbr/frbr_2008.pdf) in order to create records for each work that were narrative and hierarchical.

In the case of a work with a straightforward history like Brigg Fair, this meant adopting a standard presentational format in which the catalogue gave catalogue numbers, dedicatee, date of composition, a short introduction, duration, instrumentation, a musical incipit, and information in chronological order on manuscript sources, performance history and documents such as letters or bibliographic items: In a work with a more complicated history like the Piano Concerto, however, the model may be adapted to show a long compositional process and multiple versions:

By creating multiple “versions” of the work in MerMEId to reflect its journey through different stages of composition, and by noting extant manuscript and print sources and performances in each case, we can clearly and consistently both narrate the story of each work and show how existing sources and versions fit into it.

The data available in the British Library Archives and Manuscripts catalogue was essential for creating the Delius catalogue. At the ‘Sources’ level of each catalogue record, users can link directly to the manuscript and thus see how to access the physical manuscript, and how extant manuscripts relate to the history of each work, as in the Caprice and Elegy: 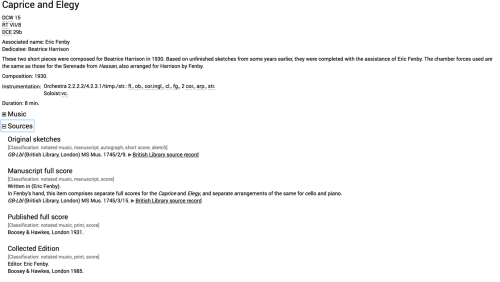 As well as fostering understanding of Delius’s works and their connection to the British Library’s outstanding manuscript collections, this project has led to exciting ongoing work. A subsequent project involving the same team involved digitising some of the British Library’s Delius manuscripts and other materials and creating a variety of articles, teaching resources and other metadata to showcase them. These are now part of the Library’s new online learning resource Discovering Music: https://www.bl.uk/20th-century-music.

We intend to expand our work to other composers, continuing to explore ways to make their music and manuscripts more accessible to a wide variety of people.

Watch Joanna Bullivant and David Lewis receiving their award on behalf of their team, and talking about their project on our YouTube channel (clip runs from 10.36):