On Monday 12th November, 2018, the British Library hosted the sixth annual BL Labs Symposium, celebrating all things digital at the BL. This was our biggest ever symposium with the conference centre at full capacity - proof, if any were needed, of the importance of using British Library digital collections and technologies for innovative projects in the heritage sector.

The delegates were welcomed by our Chief Executive, Roly Keating, and there followed a brilliant keynote by Daniel Pett, Head of Digital and IT at the Fitzwilliam Museum, Cambridge. In his talk, Dan reflected on his 3D modelling projects at the British Museum and the Fitzwilliam, and talked about the importance of experimenting with, re-imagining, and re-mixing cultural heritage digital collections in Galleries, Libraries, Archives and Museums (GLAMs).

This year’s symposium had quite a focus on 3D, with a series of fascinating talks and demonstrations throughout the day by visual artists, digital curators, and pioneers of 3D photogrammetry and data visualisation technologies. The full programme is still viewable on the Eventbrite page, and videos and slides of the presentations will be uploaded in due course. 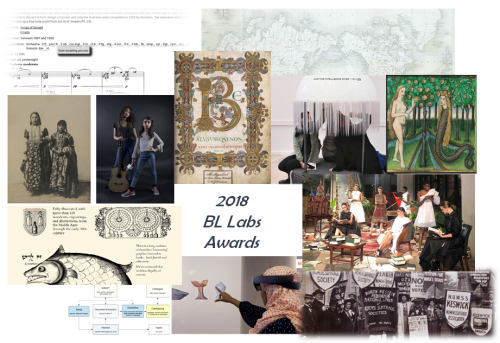 Each year, BL Labs recognises excellent work that has used the Library's digital content in five categories. The 2018 winners, runners up and honourable mentions were announced at the symposium and presented with their awards throughout the day. This year’s Award recipients were:

Winner: The Delius Catalogue of Works by Joanna Bullivant, Daniel Grimley, David Lewis and Kevin Page at the University of Oxford

Honourable Mention: Doctoral theses as alternative forms of knowledge: Surfacing ‘Southern’ perspectives on student engagement with internationalisation by Catherine Montgomery and a team of researchers at the University of Bath

Honourable Mention: HerStories: Sites of Suffragette Protest and Sabotage by Krista Cowman at the University of Lincoln and Rachel Williams, Tamsin Silvey, Ben Ellwood and Rosie Ryder of Historic England

Runner Up: Nomad by independent researcher Abira Hussein, and Sophie Dixon and Edward Silverton of Mnemoscene

Runner Up: Pocahontas and After by Michael Walling, Lucy Dunkerley and John Cobb of Border Crossings

The judging process is always a difficult one as there is such diversity in the kinds of projects that are up for consideration! So we wanted to also thank all the other entrants for their high quality submissions, and to encourage anyone out there who might be considering applying for a 2019 award!

We will be posting guest blogs by the award recipients over the coming months, so tune in to read more about their projects.

And finally, save the date for this year's symposium, which will be held at the British Library on Monday 11th November, 2019.

Posted by Digital Research Team at 10:42 AM