This guest blog is by Professor Catherine Montgomery, recipient of one of two Honourable Mentions in the 2018 BL Labs Awards Research category for her work with the British Library's EThOS collection. 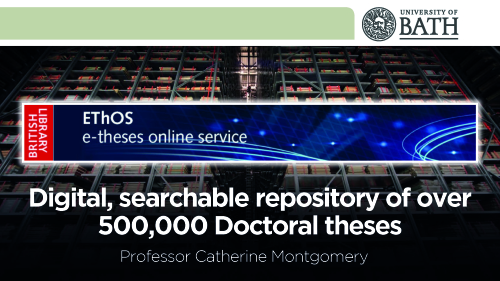 ‘Contemporary universities are powerful institutions, interlinked on a global scale; but they embed a narrow knowledge system that reflects and reproduces social inequalities on a global scale’ (Connell, 2017).

Having worked with doctoral students for many years and learned much in this process my curiosity was sparked by the EThOS collection at the British Library. EThOS houses a large proportion of UK doctoral theses completed in British Universities and comprises a digital repository of around 500,000 theses. Doctoral students use this repository regularly but mostly as a means of exploring examples of doctorates in their chosen area of research. In my experience, doctoral students are often looking at formats or methodologies when they consult EThOS rather than exploring the knowledge provided in the theses.

So when I began to think about the EThOS collection as a whole, I came to the conclusion that it is a vastly under-used but incredibly powerful resource. Doctoral knowledge is not often thought of as a coherent body of knowledge, although individual doctoral theses are sometimes quoted and consulted by academics and other doctoral students. It is also important to remember that of 84,630 Postgraduate Research students studying full time in the UK in 2016/17, half of them, 42,325, were non-UK students, with 29,875 students being from beyond the EU. So in this sense, the knowledge represented in the EThOS collection is an important international body of knowledge.

So I began to explore the EThOS collection with some help from a group of PhD students (Gihan Ismail, Luyao Li and Yanru Xu, all doctoral candidates at the Department of Education at the University of Bath) and the EThOS library team. I wanted to interrogate the collection for a particular field of knowledge and because my research field is internationalisation of higher education, I carried out a search in EThOS for theses written in the decade 2008 to 2018 focusing on student engagement with internationalisation. This generated an initial data set of 380 doctoral theses which we downloaded into the software package NVivo. We then worked on refining the data set, excluding theses irrelevant to the topic (I was focusing on higher education so, for example, internationalisation at school-level topics were excluded) coming up with a final data set of 94 theses around the chosen topic. The EThOS team at the British Library helped at this point and carried out a separate search, coming up with a set of 78 theses using a specific adjacent word search and they downloaded these into a spreadsheet for us. The two data sets were consistent with each other which was really useful triangulation in our exploration of the use of the EThOS repository.

This description makes it sound very straightforward but there were all sorts of challenges, many of them technology related, including the fact that we were working with very large amounts of text as each of the 380 theses was around 100,000 words long or more and this slowed down the NVivo software and sometimes made it crash. There were also challenges in the search process as some earlier theses in the collection were in different formats; some were scanned and therefore not searchable.

The outcomes of the work with the EThOS collection were fascinating. Various patterns emerged from the analysis of the doctoral theses and the most prominent of these were insights into the geographies of student engagement with internationalisation; issues of methodologies and theory; and different constructions of internationalisation in higher education.

A similar picture emerged when I considered the sorts of theories and ideas students were using to frame their research. There was a predominance of Western theory used by the international students to cast light on their non-western educational contexts, with many theses relying on concepts commonly associated with Western theory such as social capital, global citizenship or communities of practice. The ways in which the doctoral theses constructed ideas of internationalisation also appeared in many cases to be following a well-worn track and explored familiar concepts of internationalisation including challenges of pedagogy, intercultural interaction and the student experience. Having said this, there were also some innovative, creative and critical insights into students engaging with internationalisation, showing that alternative perspectives and different ways of thinking were generated by the theses of the EThOS collection.

Raewyn Connell, an educationalist I used in the analysis of this project tells us that in an unequal society we need ‘the view-from-below’ to challenge dominant ways of thought. I would argue that we should think about doctoral knowledge as ‘the-view-from-below’, and doctoral theses can offer us alternative perspectives and challenges to the previous narratives of issues such as internationalisation. However, it may be that the academy will need to make space for these alternative or ‘Southern’ perspectives to come in and this will rely on the capacity of the participants, both supervisors and students, to be open to negotiation in theories and ideas, something which another great scholar, Boaventura De Sousa Santos, describes as intercultural translation of knowledge.

I am very grateful indeed to the British Library and the EThOS team for developing this incredible source of digital scholarship and for their support in this project. I was delighted to be given an honourable mention in the British Library Research Lab awards and I am intending to take this work forward and explore the EThOS repository further. I was fascinated and excited to find that a growing number of countries are also developing and improving access to their doctoral research repositories (Australia, Canada, China, South Africa and USA to name but a few). This represents a huge comparative and open access data set which could be used to explore alternative perspectives on ‘taken-for-granted’ knowledge. Where better to start than with doctoral theses?

More information on the project can be found in this published article: Watch Professor Montgomery receiving her award and talking about her project on our YouTube channel (clip runs from 6.57 to 10.39):