At our symposium in November 2018, BL Labs awarded two Honourable Mentions in the Research category for projects using the British Library's digital collections. This guest blog is by the recipients of one of these - a collaborative project by Professor Krista Cowman at the University of Lincoln and Tamsin Silvey, Rachel Williams, Ben Ellwood and Rosie Ryder at Historic England.

The project marked the commemoration of the centenaries of some British women winning the Parliamentary vote in February 2018, the right to stand as MPs in November 1918 and of the first election in which women voted in December 1918. The centenary year caught the public imagination and resulted in numerous commemorative events. Our project added to these by focussing on the suffragette connections of England’s historic buildings. Its aim was to uncover the suffragette stories hidden in the bricks and mortar of England’s historic buildings and to highlight the role that the historic built environment played in the militant suffrage movement.  The Women’s Social and Political Union co-ordinated a national campaign of militant activities across the country in the decade before the First World War. Buildings were integral to this. The Union rented out shops and offices in larger towns and cities. It held large public meetings in the streets and inside meeting halls.

Suffragettes also identified buildings as legitimate targets for political sabotage. The WSPU’s leader, Emmeline Pankhurst, famously urged her followers to strike at the enemy through property. Buildings were then seen as legitimate targets for political sabotage by suffragettes who broke windows, set fires and placed bombs as part of their campaign to force the government to give votes to women.

The project used the newly-digitised resources of Votes for Women and The Suffragette to identify historic buildings connected with the militant suffrage campaign.  Local reports in both papers were consulted to compile a database of sites connected to the WSPU across England. 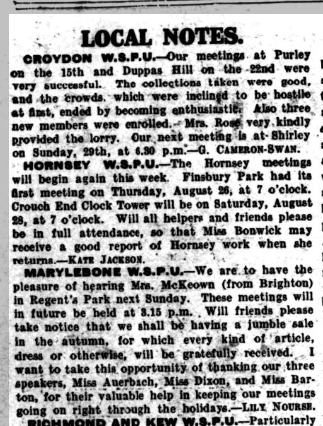 This revealed a huge diversity in locations and activities. Over 5000 entries from more than 300 geographical locations were logged. Some were obscure and mundane such as 6 Bronte Street in Keighley, the contact address for the local WSPU branch for 1908. Others were much more high–profile including St Paul’s Cathedral where a number of services were disrupted by suffragettes and a bomb was planted. All of the sites on the database were then compared with the National Heritage List, the official record of England’s protected historic buildings compiled and maintained by Historic England. https://historicengland.org.uk/listing/the-list/

This provided a new data set of over a hundred locations whose historic significance had already been recognised through listing but whose connection to militant suffrage was currently unrecognised.

These sites were further researched using the British Library’s collection of historic local newspapers to retrieve more detail about their suffragette connections including their contemporary reception. This showed previously unknown detail including an attempted attack on the old Grammar School, King’s Norton, where the Nottingham Evening Post reported how suffragettes who broke in did no damage but left a message on the blackboard saying that they had refrained from damaging it’s ‘olde worlde’ rooms.

The team selected 41 sites and updated their entries on The List to include their newly-uncovered suffragette connections.

The amended entries can be seen in more detail on Historic England’s searchable map at https://historicengland.org.uk/whats-new/news/suffragette-protest-and-sabotage-sites

The results provided a significant addition to the suffragette centenary commemorations by marking the important connections between suffragette’s fight for the vote and England’s Historic listed buildings.

Watch Krista Cowman and Tamsin Silvey receiving their Honourable Mention award on behalf of their team, and talking about their project on our YouTube channel (clip runs from 10.45 to 13.33):