Interactive Fiction in the UK

As one strand of the Emerging Formats project, the British Library is currently investigating UK Interactive Fiction (who is creating it, what kinds of work they’re creating, and what tools are being used) – in order to determine what the collecting priorities might be. The focus is on UK works specifically because this aligns with the Library’s collecting priorities with regard to born-digital works, arising out of legal deposit regulations.

The Interactive Fiction Competition identifies three broad types of IF: parser-based, Choose Your Own Adventure and hypertext. Parser-based works are sometimes referred to as ‘text adventures’. These involve typing commands in order to interact with the textual world and usually include puzzle solving. Choose Your Own Adventure (or CYOA) stories are more like the Fighting Fantasy game book series, or the recent Black Mirror episode ‘Bandersnatch’, providing readers with a series of choices which create a branching narrative. Hypertexts are linked passages of text much like a website, but the clickable links may provide choices or ways of exploring the world of the text. In these latter two types the reader’s role is less likely to involve solving puzzles and more likely to centre on exploration, interacting with characters or simply choosing how the story turns out. (Although, of course, these elements may be present in parser games too). 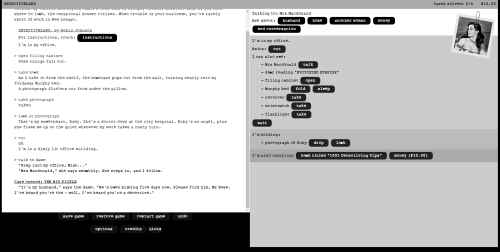 As part of my Innovation Placement, I’ve explored 97 works by 62 creators so far. Of these, 39 are parser-based, 27 are hypertexts, and 8 are choice-based, with the remainder being other formats such as multimedia (for example, Lucy English’s collection of video poems, The Book of Hours), websites (such as Krishan Coupland’s Hotel), or bespoke or hybrid systems developed by the creator (a particularly good example of this is Robin Johnson’s Zeppelin Adventure, made with his homegrown Versificator engine which creates IF that is somewhere between parser-based and choice-based). I also came across a few formats not neatly described by the types outlined above, such as collaborative wiki-based interactive fiction. However these works (like many interactive fiction works) often contain no identifying information regarding the creator and therefore it’s very difficult to determine if they are UK created. In these instances I have tended to assume that if the creator prefers to remain entirely anonymous, the likelihood is they would also prefer not to have their work archived, and so these particular texts won’t form part of the collection.

There are plenty of works which do have an identifiable UK-based author, though. These cover a wide range of genres including comedy, horror, crime, romance, historical fiction, drama, ‘slice of life’ and mystery, although science fiction and fantasy are particularly well represented (around 26 of the works might be considered fantasy, while around 17 could be categorised as science fiction).

Of the parser-based games, so far Inform stands out as the most popular tool. This is perhaps unsurprising since Inform was created by British IF author and programmer, Graham Nelson in the mid-nineties, making it one of the longest running tools for interactive fiction creation. This means it has a robust community around it, a good collection of existing works to draw inspiration from and a large number of tutorials and discussion forums to aid new creators. Popular IF writer Emily Short uses Inform to produce many of her works, including the critically acclaimed Galatea, a retelling of the Pygmallion myth in which the reader-player attempts to converse with a living statue which is able to respond in myriad ways. However, there are also works made with Quest, such as Luke A. Jones’ Drumsticks a puzzle story about reuniting a band for one last gig.

The majority of the hypertext games are created with Twine, although usage of the tool’s full range of features varies wildly. For example, Ed Sibley’s ghost story Dead Man’s Fiesta incorporates a host of images, coloured backgrounds and dynamic text, while Bethany Nolan’s crime caper Let’s Rob a Bank adopts Twine’s default layout, relying only on branching choices and variables to tell her story. A further Twine highlight is Raik by Harry Giles, a poetic fantasy story written in English with a Scots translation. (Sort of. To say more would be to spoil it!)

While the CYOA category is somewhat smaller, there are still several tools and approaches in use. Most popular is Inkle Studio’s Ink, used to create a variety of stories including Eleanor Hingley’s Unreal Estate, in which the reader-player roleplays as an estate agent attempting to sell properties to a variety of supernatural clients. The house-buying creatures are randomised and so several replays are required in order to meet them all.

The oldest work so far is paradoxically also one of the newest. The Beast of Torrack Moor by Linda Doughty (née Wright), originally written in 1988 for the ZX Spectrum was lovingly recreated for the web in 2018 by Chris Ainsley (with the original author’s permission) using his Adventuron engine. Despite what its name might suggest, this is more of a quintessentially English mystery than a blood-curdling horror.

As this brief overview indicates, UK IF creators employ a wide array of tools, styles, genres and topics, and even within the same tools and genres, there’s a huge amount of experimentation and variation. I hope to uncover yet more in the coming weeks and months, as well as finding ways to preserve them for future reader-players. If you are a UK-based creator of web-based interactive fiction, please do not hesitate to get in touch, or alternatively, feel free to nominate your work for inclusion via the UK Web Archive.